NASA Study Tracks Global Sources, Transport of Air Pollution
A NASA and university study of ozone and carbon monoxide pollution in Earth's atmosphere is providing unique insights into the sources of these pollutants and how they are transported around the world.

For the first time, NASA and university researchers used simultaneous observations of carbon monoxide and ozone from space to differentiate between ozone produced from human activity and ozone produced from natural sources. Ozone is an important pollutant and a major component of smog. At high quantities it is harmful to humans, plants and entire ecosystems. 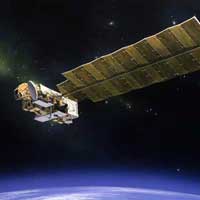 The team, led by Dr. Daniel Jacob and Lin Zhang of Harvard University, Cambridge, Mass., used global satellite observations to study regional sources of pollution such as eastern China, the northeastern United States and South America. The team also studied how ozone produced from those sources was transported across the globe.

The observations of carbon monoxide and ozone were obtained from the Tropospheric Emission Spectrometer instrument onboard NASA's Aura satellite. The instrument, built and managed by NASA's Jet Propulsion Laboratory, Pasadena, Calif., uses new methods to measure ozone and carbon monoxide in the troposphere -- the part of Earth's atmosphere between the surface and up to approximately 10 kilometers (6.2 miles) altitude.

"Global measurements of ozone and carbon monoxide are critical to understanding how air pollution impacts atmospheric chemistry, especially in the troposphere," said Zhang. "We're gaining a new understanding of how these chemicals flow out from continents and are transported around the globe. Plus, our study provides a critical test of the atmospheric models used to understand and predict how pollution is transported on intercontinental scales."

While ozone in the upper atmosphere helps to protect Earth from the sun's radiation, ozone near the surface is a harmful pollutant. Surface ozone can be produced from the chemical byproducts of human activities such as automobile emissions. Once produced, ozone can be transported not only on a regional scale - such as from California to Nevada, but on an intercontinental scale - such as from Asia to North America. This transported (imported) ozone can lead to an overall enhancement in pollution at the surface. Attributing elevated ozone levels to human activity is complicated by natural sources of ozone precursors, such as lightning.

Carbon monoxide, however, is emitted into the atmosphere almost exclusively by incomplete combustion and can generate ozone. It has a relatively long lifetime in the atmosphere and hence is often used for identifying human-induced pollution.

"In the past, scientists relied exclusively on ground-based and aircraft instrument readings," said Dr. Helen Worden, a member of the Tropospheric Emission Spectrometer instrument science team at JPL. "These observations were sparse and did not provide the global perspective that this new instrument does. It is providing the first long-term, 3-D satellite observations of global tropospheric ozone and carbon monoxide measured together."

Tropospheric Emission Spectrometer observations taken of the Northern Hemisphere showed that ozone pollution can drift from Asian sources to western North America, and from eastern North America to Europe. The team used these data to test the Goddard Earth Observing System-Chem atmospheric chemistry computer model, which is one of the primary tools used by scientists to study global-scale pollution. The consistency between the instrument observations and model results indicates that the model can reliably predict the impact of pollution produced in one country on another country.

Launched July 15, 2004, Aura is the third and final major Earth Observing System satellite. Aura carries four instruments: the Ozone Monitoring Instrument, built by the Netherlands and Finland in collaboration with NASA; the High Resolution Dynamics Limb Sounder, built by the United Kingdom and the United States; and the Microwave Limb Sounder and Tropospheric Emission Spectrometer, both built by JPL. Aura is managed by NASA's Goddard Space Flight Center, Greenbelt, Md.

Results of the study are published in the Sept. 21 issue of Geophysical Research Letters.

For more information on Aura, visit: http://aura.gsfc.nasa.gov/. For more on the Tropospheric Emission Spectrometer, see: http://tes.jpl.nasa.gov/.