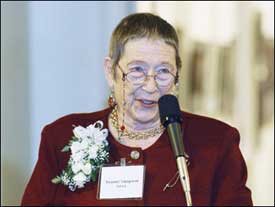 Dr. Joanne Simpson is Chief Scientist Emeritus for Meteorology, Earth Sun Exploration Division, where she currently works with a science group on Cloud and Mesoscale modeling, and studies hurricanes.

Dr. Simpson joined NASA in 1979 as the Chief of NASA’s Laboratory for Atmosphere's Severe Storms Branch. During her tenure at the agency, she made integral contributions to several historic missions, including the Convection And Moisture EXperiment (CAMEX) missions, the Tropical Ocean Global Atmospheres/Coupled Ocean Atmosphere Response Experiment (TOGA COARE), the GARP Atlantic Tropical Experiment (GATE), and the Winter Monsoon Experiment (Winter MONEX). In 1986, she was also selected as the Science Planning Team Lead for the Tropical Rainfall Measuring Mission (TRMM), a joint mission between NASA and JAXA, Japan’s Aerospace Exploration Agency. Until the launch in 1997, Dr. Simpson worked with the project engineers and recruited scientists to develop the data system for TRMM. She considers her involvement with TRMM the single greatest accomplishment of her long career.

As a student pilot during World War II, Dr. Simpson took a course in meteorology, and was hooked. Dr. Simpson earned a B.S. in Meteorology from the University of Chicago, and spent the rest of the war teaching meteorology to Aviation Cadets. In 1949, Simpson became the first woman to earn a Ph.D. in meteorology, focused her research on clouds, and went on to serve on the faculty of the University of Chicago until joining NASA permanently.

Notably, in the late 1950s, Simpson and her former professor Herbert Riehl came up with an explanation of how the atmosphere moved heat and moisture away from the tropics to higher latitudes. That explanation consisted of the "hot tower" hypothesis that later shed light on hurricanes. Simpson developed the first mathematical cloud model using a slide rule to do the calculations because computers weren't available. Her work sparked a brand new field of study in meteorology. In the early 1960s, she developed the first computer cloud model.

While on leave from the University of Chicago, Simpson also completed post-doctoral work in 1971 at Dartmouth University.

On the Shoulders of Giants: Joanne Simpson