Siberian Fires Most Common Near People
While Siberia may be one of the last expanses on Earth where human presence is relatively scarce, scientists are finding some surprising connections between humans and fires in these frigid, northern forests. Until now, most researchers assumed that lightning caused most of the fires that burned in Siberia. But a new study by NASA scientists and others used a NASA satellite to map where and when fires lit up over a three year period. The satellite showed that Siberian fires burned mostly near people. 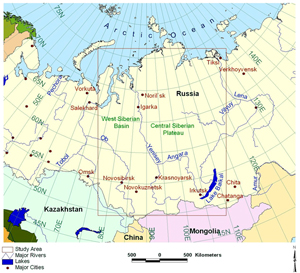 The study looked at an area in Central Siberia covering a little less than 6 million square kilometers (2,317,000 square miles). The number of fires in these areas varied greatly from year to year. For example, in 2001, less than half a percent of the land, or about 27,000 square kilometers (10,420 square miles) caught fire and burned. In 2003, that number tripled to almost 1.4 percent, or roughly 81,000 square kilometers (31,270 square miles) of land. But for each of the three years between 2001 and 2003 where data were available, the study found that most of the fires occurred in areas near where people had changed the land cover with roads, rail lines, towns and cities, industrial areas and other features related to humans. In fact, roads were the man-made feature with the greatest link to fires, with 97 percent of all fires in 2003 occurring within 300 kilometers (186 miles) of a major road.

But, the researchers caution, the striking link does not yet prove that humans are causing these fires. For starters, most of the fires were detected in southern areas, where it is warmer and drier, and where more people live. In the northern part of Siberia, above 65 degrees north, the soil freezes for most of the year, and when it melts the ground is soggy. These conditions make it hard for both people and fires to survive. In the south, where summers are longer, drier and warmer, more fires would occur regardless of human presence. In order to find clearer answers to questions of how and whether or not humans may be contributing to fires, more studies are needed to examine cultural practices in the area and how they relate to fires. 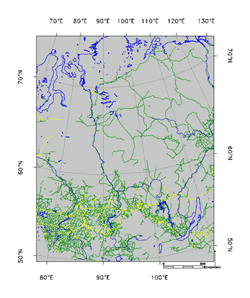 "There is some anecdotal evidence that people build small fires to temporarily stay warm outdoors, keep the bugs away from cattle, cook, or burn trash. The wind may carry the sparks from these fires and end up setting forests on fire by accident, but that is all speculation at this point," said Katalin Kovacs, and an assistant research scientist at NASA's Goddard Space Flight Center, Greenbelt, Md. Kovacs is the lead author of the study that appeared in a recent issue of the journal Earth Interactions.

The Moderate Resolution Imaging Spectroradiometer (MODIS) instrument on NASA's Terra satellite coupled with a Geographic Information System were used to map where and when Siberian fires took place over the three year period. Terra flies over this area twice in a 24-hour period. The researchers analyzed data from March through November for each of the three years. The rest of the year, the ground is snow covered, the area is very dark and few fires occur. MODIS detects hot spots in the landscape and assigns whether there is high, medium or low likelihood that a fire is present. The researchers used data points where high and medium likelihoods of fires existed. About 2 percent of the fires that MODIS detected were from industrial sources, like gas flares and smelteries. The researchers carefully removed these points before conducting their study.

In a related but separate analysis, the scientists found strong relationships between forest fires and agricultural fires, which were purposely set by farmers to clear fields and renew the soils. Forest fires were much more likely to burn near farmlands that were burned, than in forested areas away from such farmlands. 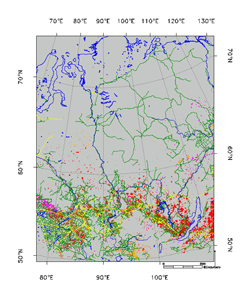 Future studies will attempt to separate out natural fires from those caused by humans. Hopefully, as the causes of these fires become clear, research like this may help people better understand the relationships between humans and fires, and how people might better manage these forest blazes. It is only through satellites like Terra that such studies can be possible, as a result of the comprehensive and reliable information that MODIS provides on hot spots on the ground.

+ Image of Major Roads and Rail Lines in Siberia (1.7 MB)

Get Roads and Rail Roads Data: