The Battery Bunny Has Little on This Space SAGE

Two will get you twenty; that's all right.

Especially if it's years spent in space flying in orbit around the Earth, checking the health of the planet's atmosphere. It keeps going and going and going. 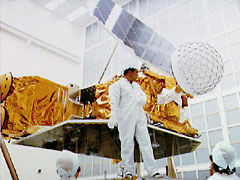 Even with a shaky start, the Stratospheric Aerosol and Gas Experiment II (SAGE II) instrument has been monitoring the effects of everything from volcanic eruptions to ozone holes in the Earth's upper atmosphere since late 1984.

Image to right: The Earth Radiation Budget Experiment (ERBE) satellite (pictured here in a NASA cleanroom) was designed to measure and analyze fluctuations in the amount of heat energy emitted by the Sun and reflected or absorbed by the Earth. Onboard is the SAGE II instrument that recently marked 20 years of continuous operation. Image credit: NASA

When it was deployed Oct. 5, 1984, from the Space Shuttle Challenger aboard the Earth Radiation Budget Satellite (ERBS), one of the solar arrays - the panels that provide power to the satellite - failed to extend. So mission specialist, Astronaut Sally Ride, had to shake the satellite with the remote-controlled robotic arm and then finally place the stuck panel into sunlight for the panel to extend.

SAGE II, built by the Ball Aerospace Systems Group, added 18 years to the original mission life of twenty-four months on ERBS and continues to give scientists a wealth of data on the chemistry and motions of the upper troposphere and stratosphere.

"The importance of the SAGE II data is helping to solve some exceedingly important societal issues like ozone depletion and greenhouse warming," said SAGE II principal investigator Dr. M. Patrick McCormick, Co-Director of the Center for Atmospheric Sciences at Hampton University, Hampton, Va. "SAGE II has been a defining experience for my career and me." 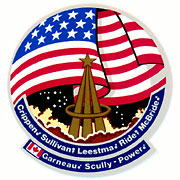 Image to left: The STS-41G mission logo. The ERBE satellite was launched aboard Space Shuttle Challenger on Oct. 5, 1984, and deployed that same day. The SAGE II instrument is on board the ERBE satellite. Image credit: NASA

Part of NASA's Earth Radiation Budget Experiment (ERBE), SAGE II on ERBS and other satellites launched in the mid 1980s were designed to investigate how energy from the Sun is absorbed and re-emitted by the Earth - one of the main processes that create weather patterns.

Observations from the ERBS satellite are also used to study the effects on the Earth's radiation balance from human activities like burning fossil fuels, the use of chemicals, and natural occurrences such as volcanic eruptions.

SAGE II has measured the decline in the amount of stratospheric ozone globally and over the Antarctic since the ozone hole was first described in 1985. Stratospheric ozone protects the Earth's surface by absorbing much of the harmful ultraviolet radiation from the Sun.

"The number one impact SAGE II data have had on the global scientific community is most certainly the 20 years of high quality ozone measurements and the ability to monitor the ozone for changes throughout the stratosphere," said Joe Zawodny, SAGE II Science Mission Manager at NASA Langley. "The understanding of the mechanisms behind the Antarctic Ozone Hole was derived partly from SAGE II ozone and polar stratospheric cloud data." 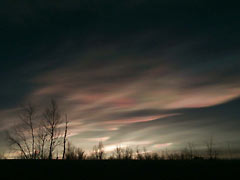 Image to right: Polar stratospheric clouds (PSCs) at dusk over the Arctic region of Sweden. PSCs act as a medium or host to create ozone-destroying chemicals. The understanding of the mechanisms behind the Antarctic ozone hole was derived partly from ozone and polar stratospheric cloud data collected by SAGE II. Image credit: NASA

Similar to ozone, SAGE II aerosol data have been important for determining the impact of volcanic aerosols on temperatures in the stratosphere and at the Earth's surface.

Three months after the 1991 Mt. Pinatubo eruption in the Philippines, scientists found that the stratospheric region near Mt. Pinatubo had warmed 2.5 - 3 degrees Centigrade (4.5 - 5.4 degrees Fahrenheit) due to the increase of aerosols.

Large concentrations of aerosols in the stratosphere can cause global surface cooling by reflecting sunlight back into space before it has a chance to warm the Earth's surface. Aerosols, like PSCs, can also enhance ozone destruction globally in the stratosphere by acting as a surface for chemical reactions.

"I would have to believe that SAGE II is a fairly big feather in NASA's cap," says Zawodny. "While SAGE II is probably not the household name that say a Hubble is, it has had an impact on the average person."

The international ozone studies have brought the international community to action with the Montreal Protocol agreement. One result is the virtual elimination of CFCs - chemicals harmful to ozone - and adopting new technology in consumer devices such as auto and home air conditioning, refrigeration, and industrial uses.

"The public should appreciate the investment they made into a satellite mission that has exceeded all predictions and hopes of a long life," added McCormick. "And for its contributions to making Earth a better place now and for subsequent generations."