Mining for ore isn't what it used to be. A hundred years ago when a mining operation happened upon a copper vein or a gold deposit, the outfit would often just rip out the local flora, excavate the land, and dump the resulting waste and rubble in the nearest pristine stream or flowering meadow. But more often than not such mining practices contaminated the surrounding soil with heavy metals or raised the acidity in nearby lakes to levels lethal for fish. Consequently, mining operations in most developed countries must now follow strict guidelines and stay away from environmentally protected areas, dispose of their waste safely, and restore the land to a close approximation of its original state when finished. 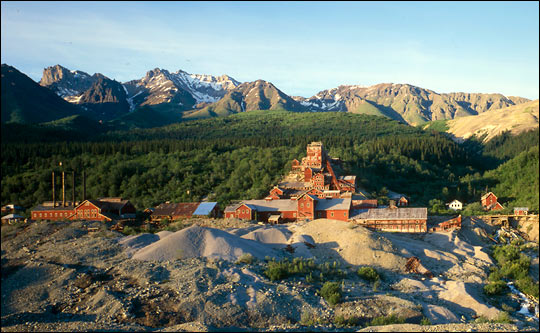 Tailing piles rise beside the abandoned buildings of the Kennecott Copper Mine in Alaska. This mine site was discovered when prospectors spied unusual green rocks. New satellites are allowing modern-day prospectors to map mineral deposits from afar. (Image courtesy Historic American Engineering Record)

Though these regulations have done wonders for the environment in places such as in the American West, companies must now spend a fortune even to locate areas suitable for digging. To aid mining operations in their search for suitable sites and to simply keep a long-term record of the world's resources, the U.S. Geological Survey (USGS) two years ago initiated the Global Mineral Resource Assessment Project. The goal of the project is to construct a series of reports outlining where the world's known metal ore deposits such as gold, copper, and iron occur and where new deposits are likely to be found.

As part of this ambitious effort, geologist Larry Rowan and a team of researchers at the USGS are now developing ways to locate potentially mineralized areas from space. Using the new Advanced Spaceborne Thermal Emissions and Reflection Radiometer (ASTER) instrument aboard the Terra satellite, they are attempting to find areas likely to contain copper in Iran and western Pakistan. If their tests are successful, then ASTER and future satellites could aid geologists in pinpointing any number of metal ores from aluminum to tin.

Some of the oldest known and best-mapped copper deposits in the world are located along a swath of land extending from central Iran to western Pakistan. Copper has been mined in the region for over 6,500 years. Currently, scientists from the U.S. Geological Survey are correlating Advanced Spaceborne Thermal Emission and Reflection Radiometer (ASTER) data with these deposits. When these methods are refined, the scientists will be able to map potential copper deposits worldwide. (Map adapted from Larry Rowan, USGS)


"For now, ASTER is really the only practical solution. It is the only instrument up there with the combination of spectral capability and geographic coverage to locate potentially mineralized areas on a global or regional scale," says Rowan. He explains that mapping the world's minerals could not be accomplished on the ground or by airplane alone. The costs would be enormous. The only feasible way to carry out such a large survey is through the use of remote sensing satellites. The problem with previous satellite instruments, however, was that while they could view large sections of the Earth, they didn't have the ability to detect the geological information needed to reveal metal ore. 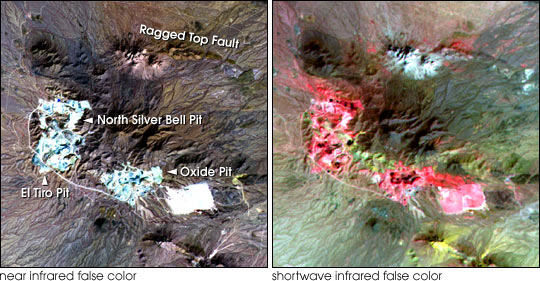 The ASTER image on the left is a composite of visible and near-infrared wavelengths, while on the right three shortwave infrared bands are used. Colors in the shortwave infrared composite correspond to different rock types. Pink indicates sericite (similar to muscovite), a component of altered granite that is associated with copper ore. (Images courtesy Mike Abrams, ASTER Science Team, JPL)


The ASTER instrument, launched aboard NASA's Terra satellite in December 1999, was designed in part to remedy this problem. The instrument moves in a nearly circular orbit approximately from pole to pole around the Earth and measures a wide range of visible and infrared solar radiation from the surface of our planet. ASTER has a spatial resolution of up to 15 meters and can gather stereoscopic (3-D) images of the Earth, making it ideal for mapping mountains and rock formations.

Rowan and the USGS team decided to test ASTER's abilities in mapping copper ore. Used in everything from electrical systems to compact discs to air conditioners, copper is one of the more expensive and useful non-precious metals. As a proving grounds, the USGS team turned their attention to a string of known copper deposits located across a 500-mile-long arc that extends from the northwest corner of Iran through the Zagros Mountains and into western Pakistan. Since this area is cloud free most of the year and many of the deposits have been mined since the beginning of the Bronze Age, the region is ideal for trying out ASTER.

"The types of deposits that lend themselves to remote sensing in Iran are intrusive deposits," says Rowan. He explains that intrusive ore deposits form deep underground. Magma from the Earth's mantle percolates into the Earth's crust in areas where two tectonic plates collide or above "hotspots" in the mantle. As this magma solidifies to create rocks such as granite, the intense heat and pressure sometimes acts in concert with underground water to forge copper deposits at the boundary between the cooling magma and the existing crust. In Iran, the intrusive deposits first took shape between 10 and 70 million years ago at the boundary of the Arabian Plate and the Eurasian Plate. The copper deposits formed thousands of feet under the Earth's surface. Continued uplift and years and years of water, ice, and wind erosion have exposed the copper ore to the Earth's surface for mining.

In looking for such intrusive deposits, geologists must focus in on those large features such as faults and folds and mountains that indicate possible ore-bearing intrusive rocks. In ASTER images, such large-scale features are usually readily apparent. Narrowing the search to specific locations among these intrusive rocks, however, is considerably more involved. Like most metals, copper doesn't exist in abundance on the Earth's surface. In fact, copper only makes up 0.00007 percent of the Earth's crust. So even in areas where deposits are common, copper is not easy to spot.

"What we do is look for other minerals that generally indicate that copper is in the region," says Rowan. Fortunately, the same geothermal processes that create copper deposits usually give rise to other minerals, known as alteration minerals, that tend to be more abundant and more noticeable. Minerals such as muscovite, alunite, kaolnite, and iron sulfide are typically found in abundance around copper deposits. Some of these, such as iron sulfide, react with surface water and oxygen to form highly visible markers (Rowan et al. 2002). "If you've ever been to an old mining site in Colorado, the presence of the resulting sulfates can be seen in the yellowish to brown red cast they leave in the water," says Rowan.

Though uncovering alteration minerals is much easier than finding an isolated copper vein, geologists still must go around collecting, testing for, and mapping the alteration minerals in large rock formations. ASTER, however, should be able to significantly reduce the amount of work and cost involved in this process. All told, ASTER can detect 14 different wavelengths (colors) of light reflected and emitted from the surface of the Earth. Generally, everything on the Earth's surface reflects certain colors of light and absorbs others. Green grass, for instance, absorbs all colors in the visible spectrum except green. Alteration minerals, though usually much more subtle in color, absorb and reflect specific bands as well. Rowan explains that nine of the satellite instrument's sensors that detect light in the visible and near-infrared (light past red on the color spectrum) range are particularly sensitive to the wavelengths associated with alteration minerals. 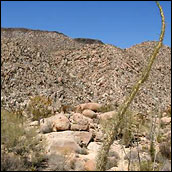 Intrusive rocks -- such as this muscovite granite -- form from magma that solidifies beneath the Earth's surface. Over millions of years scalding hot water leaches copper and other metals out of the rocks and deposits them in veins of ore. Later, erosion exposes the rocks on the surface. (Photograph from Geotectonics Field Trip, 2000 copyright Dave Kimbrough, San Diego State University) 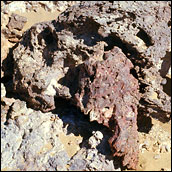 The rocks in this image are stained by limonite, formed by the interaction of oxygen in the air with an iron sulfide named pyrite. Iron sulfide minerals and their derivatives are some of the markers that may indicate copper deposits. (Photograph courtesy Larry Rowan, USGS) 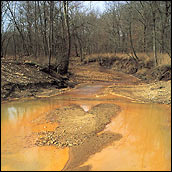 The iron sulfide minerals associated with copper deposits and other ores stain water bright orange. This Missouri stream is colored by runoff from a nearby mine. (Photograph from "The Status and Trends of the Nation's Biological Resources" courtesy USGS)

"One example of the minerals we classify that indicates the possible presence of copper is muscovite, says Rowan. Muscovite is a clear mineral with up to a quarter inch thickness that peels apart in thin layers. Back in the days before tempered glass, the mineral was used for oven windows (Isinglass). Though most visible wavelengths pass right through the mineral, it absorbs at a wavelength in the near-infrared part of the spectrum. This is the same wavelength that band 6 on ASTER detects. To map out the levels of muscovite in a region, scientists measure the brightness of light hitting band 6 on ASTER. The lower the readings are (i.e., the less light that is reflected back to the sensor) in an area, the more muscovite there is likely to be.

These minerals are all types of copper ore. [Photographs from the Ko-collection (Japanese), copyright Kyushu University]

"I caution that muscovite can occur in other rock types. This is not a formulation that will work without ambiguity. We must combine this with other information such as the rocks from different geological maps and look for certain ages and combinations of minerals that are favorable for copper," says Rowan. While muscovite is one key ingredient indicating the presence of copper, there are a number of other minerals that the team must locate to narrow the search. Since many of these alteration minerals can be found in differing proportions around other metals, such as gold, the team has to take the relative abundance of the minerals into account as well. The researchers then often need data on the age of the rock beds, the structure of the rock formations, and even the thickness of the surrounding vegetation. They bring all of this information together onto one single digitized map using Geographic Information System (GIS) software.

Rowan points out that though they are still in the preliminary stages of mapping potential copper deposits in Iran, so far their results seem to match up with known locations very well. If the mapping proves to be successful, then the USGS will employ ASTER to map not just copper, but gold, iron, and other ore deposits in well exposed areas all over the world. Such maps could help mining companies more cost effectively locate minerals in ways that will not disrupt the ecosystem. Such maps could also be used by the United States to search for potential sources of minerals such as platinum that are hard to find in North America. And poorer countries around the world could utilize these maps to tap into their resources and jumpstart their economies. "It should improve the efficiency and cost of such projects all around the world," says Rowan.