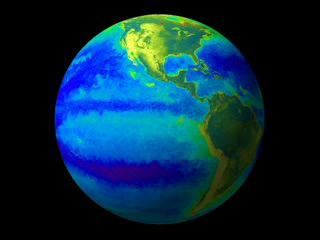 Image to left: SeaWiFS: El Nino and La Nina on a Globe: By monitoring the color of reflected light via satellite, scientists can determine how successfully plant life is photosynthesizing (or using the sun's energy). A measurement of photosynthesis is essentially a measurement of successful growth, and growth means successful use of ambient carbon. Until now, scientists have only had a continuous record of photosynthesis on land. But following three years of continual data collected by the SeaWiFS instrument, NASA has gathered the first record of photosynthetic productivity in the oceans. Since this animation, SeaWifs has accumulated 7 total years of data. Click on image to view animation (no audio--5.9 MB). Credit: NASA Scientific Visualization Studio

Phytoplankton are the base of the marine food chain, providing food for little sea animals called zooplankton, which in turn feed fish and other creatures. Any change in phytoplankton numbers alters the ocean food chain.

The computer model showed that during El Niño periods, warm waters from the Western Pacific Ocean spread out over much of the ocean basin as upwelling weakens in the Eastern Pacific Ocean. Upwelling brings cool, nutrient-rich water from the deep ocean up to the surface. When the upwelling is weakened, there are less phytoplankton, making food more scarce for zooplankton that eat the ocean plants.

During La Niña conditions as in 1998, the opposite effect occurs as the easterly trade winds pick up and upwelling intensifies bringing nutrients like iron to the surface waters, which increases phytoplankton growth. Sometimes, the growth can take place quickly, developing into what scientists call phytoplankton "blooms."

In a study published in the January 2005 issue of Geophysical Research Letters, Wendy Wang and colleagues at the University of Maryland Earth System Science Interdisciplinary Center, College Park, Md., found that changes in phytoplankton amounts due to El Niño and La Niña not only affect the food chain, but also influence Earth's climate.

As phytoplankton flourish during La Niña years, a large amount of carbon is used to build their cells during photosynthesis. The plants get carbon from carbon dioxide in surface waters. In the atmosphere, carbon dioxide is an important greenhouse gas. When marine organisms die, they carry carbon in their cells to the deep ocean. Surprisingly, this study found that this transfer of carbon to the deep ocean increased by a factor of eight due to the large phytoplankton blooms that can occur during a La Niña. At the same time, the effects of El Niños can reduce phytoplankton numbers, and decrease the impacts of this "biological carbon pump." 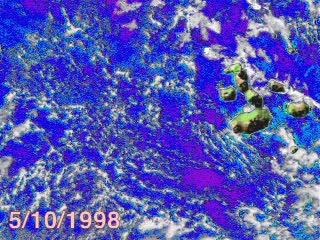 Image to left: Life Returns to the Galapagos After El Nino: During the 1997-98 El Nino, the surface water in the Pacific off the coast of South America was warmer than normal. This warm water trapped the ocean nutrients and led to a drastic decrease in phytoplankton and other ocean life in the region. The unique Galapagos ecosystem was severely affected and many species, including sea lions, seabirds, and barracudas, suffered a very high mortality level. During the second week of May, 1998, the ocean temperatures plummeted 10 degrees in one day, and the ocean productivity exploded with large phytoplankton blooms. After this time, many species recovered very rapidly and the land species started to reproduce immediately. The SeaWiFS instrument, which monitors global phytoplankton in the oceans by measuring the color of reflected light, caught this dramatic recovery. This visualization shows images from SeaWiFS starting on May 10, 1998 and ending on May 31, 1998, where ocean colors of blue or purple represents little or no ocean life and colors of yellow and red indicate significant ocean productivity. White and gray denote areas occluded by clouds in these images, and a relief image of the Galapagos Islands has been superimposed on the images to clarify the location of the islands. Click on image to view animation (no audio--2.6 MB). Credit: NASA Scientific Visualization Studio

Using a computer model and NASA's Sea-viewing Wide Field-of-view Sensor (SeaWiFS) satellite, Wang examined marine biological changes associated with El Niño and La Niña, and found the mechanisms responsible for such phytoplankton blooms. SeaWiFS measures the amount of light coming out of the ocean at different wavelengths on the spectrum, and can determine the strength of the greenness coming from the tiny plants' cells.

When the El Niño of 1997-1998 became a La Niña beginning in mid-1998, SeaWiFS imagery showed extremely dark greenness along the equator. "[At that time SeaWifs showed] chlorophyll concentrations increasing by more than 500 percent, a level not previously observed," said Wang. The study found that because most microscopic animals called zooplankton died off during the El Niño there were less around to eat phytoplankton. That led to large phytoplankton blooms.

Besides influencing the marine food web, phytoplankton also help regulate the Earth's climate by accounting for about half of the carbon dioxide, a major greenhouse gas, absorbed annually from the atmosphere by plants.