Most life in the ocean does not have fins or flippers. Single celled organisms called phytoplankton far outnumber the sum of all the marine organisms most of us think of first. While phytoplankton individually are largely invisible to the naked eye, their total effects can be seen from space. There are many trillions of phytoplankton in the sea, and together they convert huge quantities of carbon dioxide (CO2) into living matter. In that process they release a major percentage of the world's oxygen into the atmosphere. These life processes help regulate the planet's overall climate and habitability and are a bellwether of planetary health. 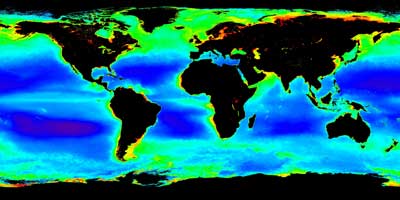 Image above: This data visualization comes from the MODIS instrument on NASA’s AQUA spacecraft. Here we see a measure of global chlorophyll concentrations, derived from data collected between July 1, 2002, and December 31, 2004. This visualization has a 4-kilometer measure of resolution. Credit: NASA

New NASA research using satellite measurements of phytoplankton has opened the door to global observations of these tiny life forms as a group, essentially helping scientists put a finger on the living pulse of the oceans, the rhythm of life upon which we all depend.

Image to right: This is a reporter's package showing the productivity of phytoplankton and how the abundance of this tiny organism enhances the health of Planet Earth. Click on image to view movie and listen to the Reporter's Package. Credit: NASA

Over the past two decades, satellites have been measuring the color of the oceans. Seawater changes from blue to green as the abundance of phytoplankton in the water increases. Researchers have used this phenomenon as recorded in the satellite color data to determine the total quantity of phytoplankton in the world's oceans. This represents a major achievement in understanding the processes of life in the ocean, but it's only half the story. Just how efficient those cells are in converting light and carbon into actual plant matter, how this supports our fisheries, and how these processes are linked to climate have remained elusive issues because, until now, the second piece of the puzzle has been missing. Until now, scientists have been unable to determine total phytoplankton growth rates.

Consider the health of an ordinary suburban lawn. From a distance we could measure the amount of grass by determining how green the lawn is, but that measurement would not tell us about how productive that grass is. In the winter, the grass might be a similar color as in the spring, but the reason we don't mow the lawn in the winter is because grass doesn't grow as quickly. To determine an accurate calculation regarding the lawn's production, you would need information about both the amount of grass and the rate that it grows.

Image to left: SeaWiFS Satellite Animations: Various space-based instruments like NASA’s SeaWiFS have made detailed measurements of ocean color, providing important insight into the health of the global biosphere. Click on image to view animation of of SeaWiFS in orbit over the Earth (no audio). Credit: NASA

This means that determinations about the productivity of plants on land or in the oceans requires data about how many plants there are and how fast they're growing. But is there any way to actually measure the growth rate of plants globally? For more than a century, oceanographers have had to answer this question with a 'no'. But now, new evidence suggests that phytoplankton growth produces a signal that can be seen from space.

The Journey is its Own Destination

"We've found the road, but we have yet to find where it's taking us." That's Dr. Mike Behrenfeld, a research scientist with Oregon State University. According to him, scientists have wondered exactly how to derive the actual productivity of life in the ocean for more than a century. In this case, productivity refers to the amount of carbon that gets taken up by phytoplankton and turned into living matter. But now, says Behrenfeld, he and his colleagues from the University of Maine and University of California may have hit upon a method for deriving a solid measurement of overall marine bio-productivity. He says, "We haven't reached Oz yet, but what we have now found is the Yellow Brick Road."

Image to right: SeaWiFS Data Visualizations: From space, seasonal changes create colorful waves of data across the world’s biosphere. In this clip, we see how oceans around the world respond to seasonal changes. Click on image to view animation of seasonal changes that take place in the oceans (no audio).Credit: NASA

The solution has been made possible through the application of a mathematical procedure for analyzing satellite ocean data. The procedure itself is neither new nor particularly challenging, but only recently has it been used for environmental problems, such as analyzing satellite ocean color data. The basic principle is simple: if you know the optical characteristics of individual components in a mixture and you know the overall color and brightness of the mixture, you can solve for the concentration of the different components present in the mixture.

"Perhaps this sounds complex, but the essence of the approach is actually used in our everyday lives," Dr. Behrenfeld explains. "A simple example is matching paint colors. If you take a paint sample to your local hardware store, they will put it in an analyzer that tells them how much of each base color needs to be mixed together to give the color you want. The 'analyzer' uses a mathematical procedure to solve the problem. The same can now be done with satellite ocean color data: we know the optical characteristics ('colors') of the individual components and mathematically solve for their concentrations."

So how does this give us growth rates? Well, that's the new and exciting trick. For the first time, we now have a means to determine the number of phytoplankton cells in the water and how 'green' they are, and its this 'greenness' that provides a sort of 'litmus test' for growth rate. When phytoplankton become stressed by cold water temperatures, bright light, or low nutrients, they become less pigmented, or in other words less "green." Similarly phytoplankton become greener when conditions improve and growth rates increase. What the new study shows is that we can now detect these changes from space and relate them to the activity of the ocean plants. Once scientists achieve an accurate estimate of growth rate and phytoplankton biomass, calculating productivity will become a basic mathematical procedure.

While the new study establishes the road to solving the productivity problem, realizing its full potential will require new and more comprehensive satellite measurements that will allow more accurate analytical separation of the various color and brightness components of ocean waters. "This is an exciting time for ocean remote sensing because it is now clear how satellite observations need to evolve to finally solve a very long standing question," says Dr. Emmanuel Boss, a coauthor on the new study.

Image to left: Microscopic organisms called phytoplankton may not amount to much individually, but counted in the trillions, they play a major role in keeping the Earth’s biosphere in balance. Click on image to view movie of plankton (no audio). Credit: NASA

The global importance of phytoplankton cannot be overstated. As individuals, these miniscule plants have very little consequence. But taken as a whole, phytoplankton represent a category of life on Earth with some of the most profound potential effects. An understanding of net phytoplankton productivity allows scientists to address important issues pertaining to ecological sustainability. These areas include overall water quality, distribution of and the overall health of fisheries, principal feedbacks to global climate changes, and much more.

In broader terms, this kind of research helps define the purpose of NASA's space based Earth observations. Exploration like this goes to the heart of the space agency’s mission. In an effort to widen the frontiers of knowledge, NASA continues to protect life on Earth by using its unique observational capabilities to learn how ecosystems function and respond to change.

A recording of the February 10 Media Teleconference with the researchers can be downloaded at:
https://www.mymeetings.com/mm/ims/d.php?o=3057656
Order ID: 3057656
PASSCODE (all caps): PLANKTON.

+ Click here for a high resolution image of the global chlorophyll concentrations (3.2 MB).

+ Click here for high resolution image of the globe (14 MB).

+ Click here for a high resolution image of the Spring phytoplankton bloom in the Atlantic (16 MB).