NASA and NOAA Announce Ozone Hole is a Double Record Breaker
NASA and National Oceanic and Atmospheric Administration (NOAA) scientists report this year's ozone hole in the polar region of the Southern Hemisphere has broken records for area and depth.

The ozone layer acts to protect life on Earth by blocking harmful ultraviolet rays from the sun. The "ozone hole" is a severe depletion of the ozone layer high above Antarctica. It is primarily caused by human-produced compounds that release chlorine and bromine gases in the stratosphere. 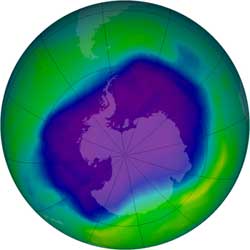 Image right: From September 21-30, 2006 the average area of the ozone hole was the largest ever observed, at 10.6 million square miles. This image, from Sept. 24, the Antarctic ozone hole was equal to the record single-day largest area of 11.4 million square miles, reached on Sept. 9, 2000. Satellite instruments monitor the ozone layer, and we use their data to create the images that depict the amount of ozone. The blue and purple colors are where there is the least ozone, and the greens, yellows, and reds are where there is more ozone. Click image to enlarge. Credit: NASA

"From September 21 to 30, the average area of the ozone hole was the largest ever observed, at 10.6 million square miles," said Paul Newman, atmospheric scientist at NASA's Goddard Space Flight Center, Greenbelt, Md. If the stratospheric weather conditions had been normal, the ozone hole would be expected to reach a size of about 8.9 to 9.3 million square miles, about the surface area of North America.

The Ozone Monitoring Instrument on NASA's Aura satellite measures the total amount of ozone from the ground to the upper atmosphere over the entire Antarctic continent. This instrument observed a low value of 85 Dobson Units (DU) on Oct. 8, in a region over the East Antarctic ice sheet. Dobson Units are a measure of ozone amounts above a fixed point in the atmosphere. The Ozone Monitoring Instrument was developed by the Netherlands' Agency for Aerospace Programs, Delft, The Netherlands, and the Finnish Meteorological Institute, Helsinki, Finland.

Scientists from NOAA's Earth System Research Laboratory in Boulder, Colo., use balloon-borne instruments to measure ozone directly over the South Pole. By Oct. 9, the total column ozone had plunged to 93 DU from approximately 300 DU in mid-July. More importantly, nearly all of the ozone in the layer between eight and 13 miles above the Earth's surface had been destroyed. In this critical layer, the instrument measured a record low of only 1.2 DU., having rapidly plunged from an average non-hole reading of 125 DU in July and August.

"These numbers mean the ozone is virtually gone in this layer of the atmosphere," said David Hofmann, director of the Global Monitoring Division at the NOAA Earth System Research Laboratory. "The depleted layer has an unusual vertical extent this year, so it appears that the 2006 ozone hole will go down as a record-setter." 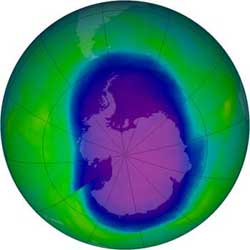 Image left: The ozone hole of 2006 is the most severe ozone hole (least amount of ozone) observed to date. NASA's Aura satellite observed a low value of 85 Dobson Units (DU) on Oct. 8 in a region over the East Antarctic ice sheet. Dobson Units are a measure of ozone amounts above a fixed point in the atmosphere. This severe ozone hole resulted from the very high ozone depleting substance levels and the record cold conditions in the Antarctic stratosphere. Click image to enlarge. Credit: NASA

The temperature of the Antarctic stratosphere causes the severity of the ozone hole to vary from year to year. Colder than average temperatures result in larger and deeper ozone holes, while warmer temperatures lead to smaller ones. The NOAA National Centers for Environmental Prediction (NCEP) provided analyses of satellite and balloon stratospheric temperature observations. The temperature readings from NOAA satellites and balloons during late-September 2006 showed the lower stratosphere at the rim of Antarctica was approximately nine degrees Fahrenheit colder than average, increasing the size of this year's ozone hole by 1.2 to 1.5 million square miles.

As a result of the Montreal Protocol and its amendments, the concentrations of ozone-depleting substances in the lower atmosphere (troposphere) peaked around 1995 and are decreasing in both the troposphere and stratosphere. It is estimated these gases reached peak levels in the Antarctica stratosphere in 2001. However, these ozone-depleting substances typically have very long lifetimes in the atmosphere (more than 40 years).

As a result of this slow decline, the ozone hole is estimated to annually very slowly decrease in area by about 0.1 to 0.2 percent for the next five to 10 years. This slow decrease is masked by large year-to-year variations caused by Antarctic stratosphere weather fluctuations.

The recently completed 2006 World Meteorological Organization/United Nations Environment Programme Scientific Assessment of Ozone Depletion concluded the ozone hole recovery would be masked by annual variability for the near future and the ozone hole would fully recover in approximately 2065.

"We now have the largest ozone hole on record for this time of year," said Craig Long of NCEP. As the sun rises higher in the sky during October and November, this unusually large and persistent area may allow much more ultraviolet light than usual to reach Earth's surface in the southern latitudes.