NASA Sees Ozone Hole Approach Annual Peak
In 1987, the United States joined several other nations in signing the Montreal Protocol, an international treaty designed to protect the Earth’s ozone layer by phasing out the production of a number of substances believed to be responsible for ozone depletion. 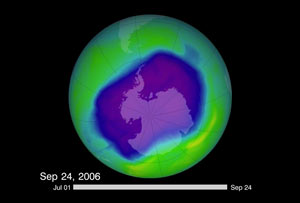 Image right: This image, captured from the Ozone Monitoring Instrument (OMI) aboard NASA's Aura satellite, shows the area of the ozone hole over Antarctica on September 24, 2006. Click image to enlarge.Credit: NASA

NASA's sub-orbital measurements, captured by aircraft- and ground-based sensors, provided much of our basic initial understanding of the cause and effect between anthropogenic, or man-made, chlorofluorocarbons (CFCs), and the Antarctic ozone hole. Now, as the Antarctic ozone hole approaches its annual peak nineteen years later, NASA scientists are using the latest tools to determine what effect the ban on CFCs and related chemicals has had and how long we will have to wait for a full ozone layer recovery. The agency is sharing the latest information and satellite images of the ozone hole with the public on its Ozone Watch Web site.

CFCs are non-toxic and non-flammable, and were used for popular household products such as air conditioner and refrigerator coolant, aerosol hairsprays, and cleaning solvents. Researchers confirmed in the 1970s that CFCs were escaping high in the air into the stratosphere (6-30 miles above the Earth's surface) where they destroy "good" ozone, a colorless gas that protects us from the most harmful forms of solar radiation. This realization eventually led to the global ban on these pollutants.

Each fall, the area of the Antarctic atmosphere called the “ozone hole” opens up in mid-August during the onset of spring in the Southern Hemisphere and peaks in late September or early October. The ozone "hole" is not a hole in the literal sense where no ozone exists, but a region above the Antarctic where significant amounts of ozone are destroyed based on the temperature and amount of ozone-depleting gases in the air. Though it is still too early to tell, the 2006 Antarctic ozone hole has not shown any substantial signs of recovery. 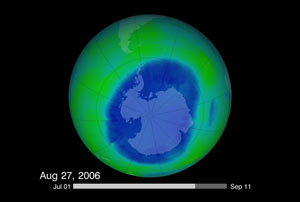 Image left: This image, captured from the Ozone Monitoring Instrument (OMI) aboard NASA's Aura satellite, shows the area of the ozone hole over Antarctica on August 27, 2006. Click image to enlarge. Credit: NASA

"This region that we look at is over 9 million square miles, now that’s pretty large," said Paul Newman, a senior research scientist at NASA's Goddard Space Flight Center in Greenbelt, Md. Newman, who has used NASA satellite technology to study how much impact the ban is having on the size of the ozone hole says, "That’s larger than the entire continent of North America. So this is a very large thing that we’re looking at."

Newman and other scientists keep tabs on ozone hole recovery using several satellites including Aura, which carries four instruments continuously capturing data on the atmosphere, most notably the Ozone Monitoring Instrument (OMI), built by the Netherlands and Finland in collaboration with NASA. Aura is part of NASA’s Earth Observing System fleet of satellites.

Intense ultraviolet radiation in the upper atmosphere gives birth to ozone. The radiation breaks typical oxygen molecules down into free-floating oxygen atoms. Ozone is created when a free oxygen atom joins with an oxygen molecule to form a molecule of ozone. Chemical reactions involving such familiar compounds as chlorine, bromine, nitrogen, and hydrogen can destroy ozone. 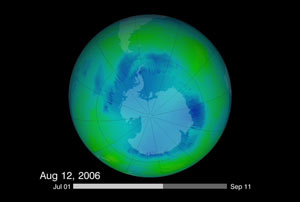 Image right: This image, captured from the Ozone Monitoring Instrument (OMI) aboard NASA's Aura satellite, shows the area of the ozone hole over Antarctica on August 12, 2006. Click image to enlarge. Credit: NASA

"The Antarctic ozone hole will reach sizes on the order of 8-10 million square miles nearly every year until about 2018 or so," said Newman. "Around 2018, things should slowly start improving, and somewhere between 2020 and 2025, we’ll be able to detect that the ozone hole is actually beginning to decrease in size. Eventually the ozone hole will go back to its normal level around 2070 or so. So we will soon see what this year's peak will reveal about the ozone hole and our ability to predict its development and recovery."