NASA researchers, using data from the agency's AURA satellite, determined the seasonal ozone hole that developed over Antarctica this year is smaller than in previous years.

NASA's 2005 assessment of the size and thickness of the ozone layer was the first based on observations from the Ozone Monitoring Instrument on the agency's Aura spacecraft. Aura was launched in 2004.

Image right: The 2005 Antarctic ozone hole was breaking up and shrinking on Nov. 8 when these observations were made by NASA's Aura satellite. The region of low ozone (blue and purple) moved over the tip of South America. (+ Download High-Res .jpg) Credit: NASA

The protective ozone layer over Antarctica annually undergoes a seasonal change, but since the first satellite measurements in 1979, the ozone hole has gotten larger. Human-produced chlorine and bromine chemicals can lead to the destruction of ozone in the stratosphere. By international agreement, these damaging chemicals were banned in 1995, and their levels in the atmosphere are decreasing.

Another important factor in how much ozone is destroyed each year is the temperature of the air high in the atmosphere. As with temperatures on the ground, some years are colder than others. When it's colder in the stratosphere, more ozone is destroyed. The 2005 ozone hole was approximately 386,000 square miles larger than it would have been in a year with normal temperatures, because it was colder than average. Only twice in the last decade has the ozone hole shrunk to the size it typically was in the late 1980s. Those years, 2002 and 2004, were the warmest of the period. 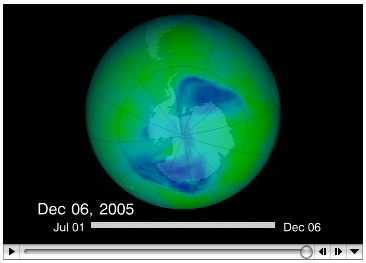 Scientists also monitor how much ozone there is in the atmosphere from the ground to space. The thickness of the Antarctic ozone layer was the third highest of the last decade, as measured by the lowest reading recorded during the year. The level was 102 Dobson Units (the system of measurement designated to gauge ozone thickness). That is approximately one-half as thick as the layer before 1980 during the same time of year.

The Ozone Monitoring Instrument is the latest in a series of ozone-observing instruments flown by NASA over the last two decades. This instrument provides a more detailed view of ozone and is also able to monitor chemicals involved in ozone destruction. The instrument is a contribution to the mission from the Netherlands' Agency for Aerospace Programs in collaboration with the Finnish Meteorological Institute. The Royal Netherlands Meteorological Institute is the principal investigator on the instrument.