B-15A Antarctic Iceberg Makes a Break For It
NASA satellites show the 1,200-square-mile B-15A iceberg breaking up into three huge pieces. For the last several years, this iceberg has earned the title of the largest free-floating object on the planet. It has been stuck near Ross Island, the location of the U.S. Antarctic Program's McMurdo Research Station, trapping ice in McMurdo Sound. The large iceberg has stranded penguins, who could not reach open water and return with food for their young. The excess ice also made planning a shipping route to McMurdo Station difficult. B-15A is now near Cape Adare. 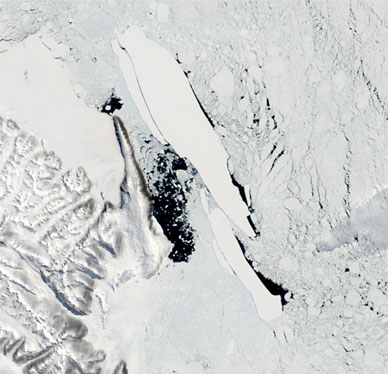 Routinely, the waters in McMurdo Sound experience an annual cycle in which surface waters freeze during Antarctica's frigid winter, then melt, break apart and drift into the Ross Sea during the summer. By mid January, much of this ice has typically been swept from the area.

For more information on the B-15 iceberg visit NASA Earth Observatory. 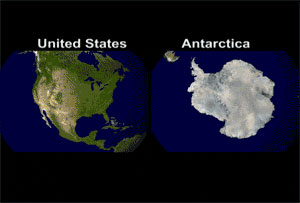 Image right: The MODIS instrument on NASA’s Aqua and Terra satellites captured several images of the shifting B-15A iceberg between November 9, 2004 and January 17, 2005. This is a still from the animation showing the comparison in size between the United States and Antarctica. Within the animation, the Iceberg is also compared to the size of Long Island, New York. Click on image to view animation (no audio - 800 Kb). Credit: NASA