NASA Finds Sun-Climate Connection in Old Nile Records
Long-term climate records are a key to understanding how Earth's climate changed in the past and how it may change in the future. Direct measurements of light energy emitted by the sun, taken by satellites and other modern scientific techniques, suggest variations in the sun's activity influence Earth's long-term climate. However, there were no measured climate records of this type until the relatively recent scientific past.

Scientists have traditionally relied upon indirect data gathering methods to study climate in the Earth's past, such as drilling ice cores in Greenland and Antarctica. Such samples of accumulated snow and ice drilled from deep within ice sheets or glaciers contain trapped air bubbles whose composition can provide a picture of past climate conditions. Now, however, a group of NASA and university scientists has found a convincing link between long-term solar and climate variability in a unique and unexpected source: directly measured ancient water level records of the Nile, Earth's longest river. 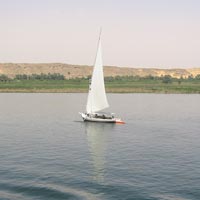 Alexander Ruzmaikin and Joan Feynman of NASA's Jet Propulsion Laboratory, Pasadena, Calif., together with Dr. Yuk Yung of the California Institute of Technology, Pasadena, Calif., have analyzed Egyptian records of annual Nile water levels collected between 622 and 1470 A.D. at Rawdah Island in Cairo. These records were then compared to another well-documented human record from the same time period: observations of the number of auroras reported per decade in the Northern Hemisphere. Auroras are bright glows in the night sky that happen when mass is rapidly ejected from the sun's corona, or following solar flares. They are an excellent means of tracking variations in the sun's activity.

Feynman said that while ancient Nile and auroral records are generally "spotty," that was not the case for the particular 850-year period they studied.

"Since the time of the pharaohs, the water levels of the Nile were accurately measured, since they were critically important for agriculture and the preservation of temples in Egypt," she said. "These records are highly accurate and were obtained directly, making them a rare and unique resource for climatologists to peer back in time."

A similarly accurate record exists for auroral activity during the same time period in northern Europe and the Far East. People there routinely and carefully observed and recorded auroral activity, because auroras were believed to portend future disasters, such as droughts and the deaths of kings.

"A great deal of modern scientific effort has gone into collecting these ancient auroral records, inter-comparing them and evaluating their accuracy," Ruzmaikin said. "They have been successfully used by aurora experts around the world to study longer time scale variations."

The researchers said the findings have climate implications that extend far beyond the Nile River basin.

"Our results characterize not just a small region of the upper Nile, but a much more extended part of Africa," said Ruzmaikin. "The Nile River provides drainage for approximately 10 percent of the African continent. Its two main sources - Lake Tana in Ethiopia and Lake Victoria in Tanzania, Uganda and Kenya - are in equatorial Africa. Since Africa's climate is interrelated to climate variability in the Indian and Atlantic Oceans, these findings help us better understand climate change on a global basis."

So what causes these cyclical links between solar variability and the Nile? The authors suggest that variations in the sun's ultraviolet energy cause adjustments in a climate pattern called the Northern Annular Mode, which affects climate in the atmosphere of the Northern Hemisphere during the winter. At sea level, this mode becomes the North Atlantic Oscillation, a large-scale seesaw in atmospheric mass that affects how air circulates over the Atlantic Ocean. During periods of high solar activity, the North Atlantic Oscillation's influence extends to the Indian Ocean. These adjustments may affect the distribution of air temperatures, which subsequently influence air circulation and rainfall at the Nile River's sources in eastern equatorial Africa. When solar activity is high, conditions are drier, and when it is low, conditions are wetter.

Study findings were recently published in the Journal of Geophysical Research.