Airborne Science in the Classroom: The Next-Best Thing to Being There
It was early in the fall semester, and to University of Utah meteorologist Ed Zipser, it was the perfect day to be teaching a graduate course in tropical meteorology.

Zipser had just returned from the NASA African Monsoon Multidisciplinary Analysis - or NAMMA - field campaign based in the Cape Verde Islands, off the west coast of Africa. Zipser was chief scientist for the NAMMA mission. 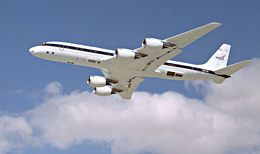 NASA's DC-8 Airborne Laboratory was still conducting NAMMA research missions, probing an easterly atmospheric wave off the African continent. These easterly waves are storm systems that occasionally develop into tropical cyclones, and the main purpose of NAMMA was to find out the differences between the developing and non-developing waves.

Armed with a notebook computer and an Internet connection, Zipser effortlessly immersed students in the research activity. Through live displays of the DC-8's position fused with weather imagery and other meteorological essentials, students were able to view exactly what was unfolding five or six time zones away. They saw the same displays of satellite images and locations of lightning strikes that researchers aboard the DC-8 and in the operations center on the Cape Verdes were seeing. Even better, they were able to interact with those researchers via live text messaging.

"Why are you turning here?" was a simple question to get the conversation rolling between Utah and Africa. With Zipser guiding the students through the activity, they soon managed to engage in the conversation.

The simplicity of the exercise's execution and the affordable cost for student participation were made possible through the Earth Science Capabilities Demonstration project at NASA's Dryden Flight Research Center, Edwards Air Force Base, Calif. Researchers in Dryden's Suborbital Telepresence subproject, known as Over-the-Horizon Networks, managed the network connectivity to and from the aircraft and utilized the REVEAL – Research Environment for Vehicle Embedded Analysis – system to provide aircraft status and other measured parameters. 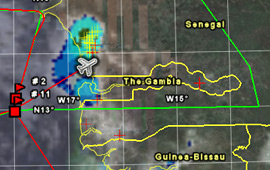 Image left: The flight path of NASA's DC-8 during a NAMMA mission off the west coast of Africa is overlaid on this satellite photo from Google Earth.

Collaborating partners at Marshall Space Flight Center, Huntsville, Ala., added other types of information and made all of it accessible to the NAMMA research team in a package called the Real Time Mission Monitor. The monitor integrated satellite and radar imagery, lightning observations, weather model predictions and other data sets with aircraft navigation data and other information from onboard instruments. All of this was viewable in three-dimensional space and time with the user-friendly Google Earth virtual globe.

"The development of the Real Time Mission Monitor as a cooperative effort by Dryden and Marshall was a major step forward in our capabilities for doing real-time monitoring and direction of missions," Zipser said. "This is a true achievement that required a marriage of technology and science."

The success of the effort came as no surprise to Larry Freudinger, project lead at Dryden for the Suborbital Telepresence team that created the REVEAL data system in order to support the evolution of airborne science sensor webs.

"Dr. Zipser's classroom is a milestone that demonstrates sustainable benefits derived from effective network communications with airborne platforms," Freudinger said. "As sensor Web technologies mature, the network becomes the instrument by which many students and researchers observe and learn. This really is just the beginning."