NASA Looks Back as Mount St. Helens Trembles Again
After days of small earthquakes and warnings from scientists, a cloud of steam and ash escaped out of the top of Mount St. Helens in Washington today. Scientists don't expect the current activity to approach the magnitude of the 1980 eruption, which blew off the north side of the volcano and deposited ash over 250 miles away.

From its unique vantage point in space, NASA takes a look back at two decades of change in the geography of Mount St. Helens. 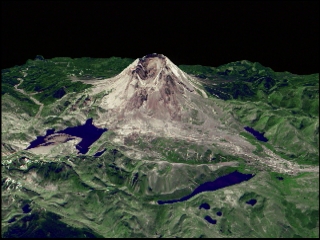 Image above: Click on the image of Mt. St. Helens to view animation that takes you on a 360 degree spin around the volcano. (3.63 MB)

Data from the ASTER instrument on NASA's Terra satellite provides a virtual fly-around of Mount St. Helens on August 8, 2000. A part of the Cascade Range of mountains, Mt. St. Helens began to wake from more than one hundred years of slumber in the beginning of 1980. When it ultimately erupted on May 18 of that year, the energy released actually caused the disintegration of the mountain's top. Computer experts enhanced this visualization to reflect the more familiar look of a wooded area. ASTER data taken in the visible and near infrared parts of the spectrum were draped over a digital topographic model, itself created by the 3-D stereo imaging capabilities of the instrument. The vertical relief of the image has been exaggerated by a factor of two to enhance the surface features. Credit: NASA

Image above: This animated GIF will replay four times before its stops. If you wish to view the animation again, please refresh this web page. The GIF shows Mt. St. Helens over time from 1973 to 2000. The movie also shows the same animation. Click on the link above to view that animation.

The explosion of Mount St. Helens in 1980 sets the scene for one of Landsat's most important capabilities. As a means for archiving surface features, researchers can study how the Earth changes over time. In this sequence, pictures of the mountain taken in 1973, 1983, and 2000 show how the eruption changed the surrounding area. Notice how the north face of the mountain dramatically changed following the blast. The crater's mouth elongated, and significant ash deposits altered the down slope terrain. Credit: NASA/USGS

ATMOSPHERIC EFFECTS OF AN ERUPTION 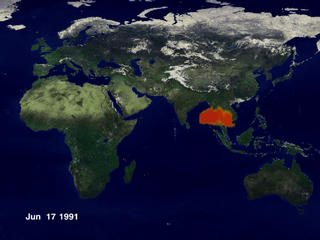 Image above: Click on image to view visualization. This visualization shows the movement of sulfur dioxide around the globe after the monumental eruption of Mt. Pinatubo on June 15, 1991. This data taken from NASA's Total Ozone Mapping Spectrometer (TOMS) instrument shows the international path of the gas for two weeks following the eruption. Credit: NASA

Gases, water vapor, and ash from a volcanic eruption combine to form dust clouds in the earth's atmosphere that, if widespread enough, can contribute to a cooling of the global climate. NASA operates a number of satellites that measure and map the movement of these materials in the earth's atmosphere. NASA scientists are studying the potential effect of such particles on global climate as well as aviation safety.