The images may provide valuable clues as to how the volcano erupted. Scientists flew an infrared imaging system aboard a small Cessna Caravan aircraft over the mountain to acquire the IR data. 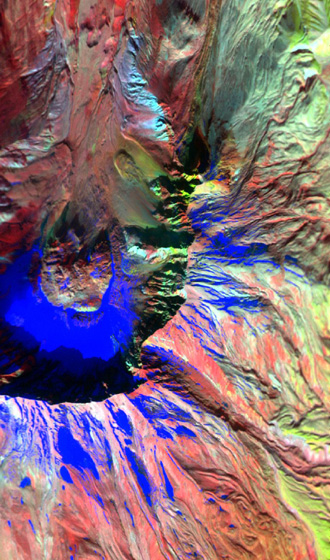 Image left: In this color composite, blue indicates the snow cover, orange and yellow colors are characterizing the rock type and lava age, and the red color is indicating heat. North is at the top of the photo. Photo credit: NASA

"We were seeing some thermal artifacts in the floor of the Mt. St. Helens crater in southern Washington," said Bruce Coffland, a member of the Airborne Sensor Facility at NASA Ames. "We flew Thursday (Sept. 30) and used the 50-channel MODIS/ASTER Airborne Simulator (MASTER) digital imaging system. We are working to create images from the IR data that depict the thermal signatures on the dome," Coffland added just after the data was acquired.

The NASA Ames airborne sensor team was in the Mt. St. Helens area taking data for a United States Geological Survey (USGS) study that was looking at some of the effects of the 1980 Mt. St. Helens eruption.

"This had been planned for some time, and we were there totally by coincidence," said Coffland. The science objectives for the USGS study included outlining the boundaries of lava flows associated with Mt. St. Helens' previous eruptions in 1980.

After the plane landed, technicians downloaded data from a computer hard drive, and began to process the data to produce an image format for use by scientists.

Sky Research, based in Ashland, Ore., provided the Cessna Caravan, a propeller-driven, single-engine airplane that carried the IR imager.