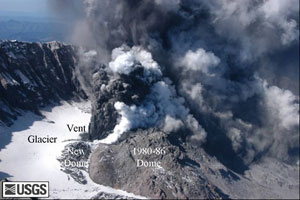 Image to right: Photograph taken on October 1, 2004 of renewed volcanic activity within the crater formed by the eruption of Mount St. Helens in 1980. Recent activity, concentrated on the south side of the volcanic dome formed in the 1980s, includes uplift of a new dome from beneath the crater glacier and formation of vents by glacier melting and explosive eruptions of steam and ash. Click on image to enlarge. Credit: USGS

With data derived from airborne LIDAR, scientists can accurately map, often in exquisite detail, the dimensions of the uplift and create better models to forecast volcanic hazards. LIDAR shows, in the two weeks before Oct. 4, the new uplift grew to the height of a 35-story building (110 meters or 360 feet) and the area of 29 football fields (130,000 square meters). 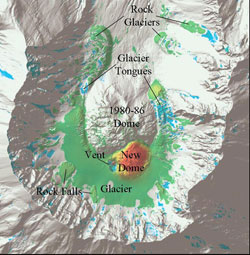 Image to left: Elevation differences in the crater were found between two airborne LIDAR surveys conducted in September 2003 and October 4, 2004. The image is a computer-generated representation of the October 4 topography. The superimposed colors indicate areas of change: areas where elevation has lowered between 0.5 to 30 meters (blue); areas where elevation has increased between 1.5 to 40 m, 40 m to 80 m, and 80 m to 120 m are green, yellow, and orange, respectively. Click on image to enlarge. Credit: USGS and NASA

"This is the first time USGS and NASA have teamed to use LIDAR to measure volcano deformation," said USGS scientist Ralph Haugerud. He noted LIDAR technology enables researchers to compare with greater accuracy than ever before the topography before and after volcanic events. "The resulting pictures of topographic change can reveal information found in no other kind of data set," added David Harding, a scientist at NASA's Goddard Space Flight Center, Greenbelt, Md. 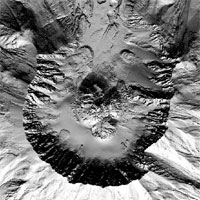 Image to right: This animation shows two images that were produced from the LIDAR data taken September 2003 and October 4, 2004. They show the growth of the new dome, glacier advance, and rock falls within the Mount St. Helens crater. Click on image to view animation. Credit: USGS and NASA

In 2003 the USGS contracted a LIDAR survey of Mount St. Helens. In early September 2004, USGS and NASA scientists began detailed planning for a second survey. The survey, contracted by NASA, would extend the area covered by the first survey. But when the mountain began rumbling on Sept. 23, USGS and NASA scientists accelerated plans and re- surveyed the mountain on Oct. 4. The topographic changes resulting from the unrest at Mount St. Helens are shown in detail in the Oct. 4, 2004, LIDAR survey. 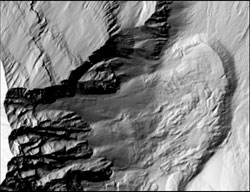 Image to left: This animation shows topographic changes in the northwest part of the crater, depicting a rock glacier moving downslope to the northeast. New material is fed into this slowly moving mass of mixed rock and ice from the steep crater wall on the left. Note the retreat of the crater rim by erosion and movement of rock down the talus fans at the base of the wall. Click on image to view animation. Credit: USGS and NASA

Some of the Mount St. Helens features related to the volcanic unrest visualized in the new LIDAR-derived Digital Elevation Model (DEM) include growth of a new volcanic dome south of the 1980-1986 volcanic dome and new steam-and-ash vents. Additional changes between the two LIDAR surveys unrelated to the volcanic unrest include shrinking snow fields, several rock falls, movement of three rock glaciers, and growth of the crater glacier, which has been an ongoing subject of USGS research at Mount St. Helens. 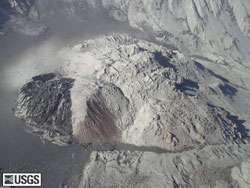 Image to right: This photograph from October 4, 2004 shows the enlarging new dome on the south (left) side of the volcanic dome formed in the 1980's after the eruption of Mount St. Helens. On this date, the area of the new dome was equivalent to 29 football fields, it is as tall as a 35 story building, and its volume is 5.3 million cubic meters. Click on image to enlarge. Credit: USGS

Comparison and analysis of the DEMs from the two surveys by Haugerud and Harding show, as of Oct. 4, 2004, 5.3 million cubic meters (6.9 million cubic yards) of volume change occurred in the area of uplift. This analysis confirms photogrammetric measurements made over the same period by the USGS. 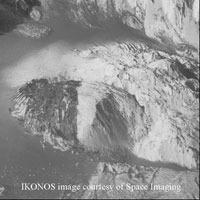 Image to left: This computer rendering of the same view as depicted in the previous photograph, was created by draping a black and white image acquired by the IKONOS satellite on October 4 onto the LIDAR mapping topography data acquired the same day. The IKONOS image, provided courtesy of Space Imaging, has a resolution of 1 m. Click on image to enlarge. Credit: NASA/Space Imaging

Linda Mark, a hydrologist with the USGS Cascades Volcano Observatory, said "Global Positioning System data provide us with very accurate point measurements of deformation, but only at locations where we can place an instrument. LIDAR, however, helps us quantify the ongoing deformation in the crater of Mount St. Helens with lesser accuracy but over a much broader area. Used together, the two methods complement each other, and the LIDAR-derived DEMs can be used for modeling efforts to help forecast volcanic hazards."

LIDAR mapping uses a scanning laser rangefinder mounted in a small aircraft to measure distances from the aircraft to the ground several tens of thousands of times each second. It commonly measures the ground position at points a meter apart with vertical accuracy as good as 10 centimeters (four inches).

NASA scientists and engineers in the 1980s and 1990s pioneered airborne LIDAR mapping, Harding said. "Because of its very high accuracy and fast turn-around of results, LIDAR is rapidly becoming the preferred method for detailed topographic mapping and is conducted worldwide on a commercial basis by numerous companies," he said.