Satellites Spot Mighty Mississippi – In the Atlantic
Scientists using satellite imagery found that at least 23 percent of the water released from the mouth of the Mississippi River from July through September 2004 traveled quite a distance - into the Gulf of Mexico, around the Florida Keys, and into the Atlantic Ocean. 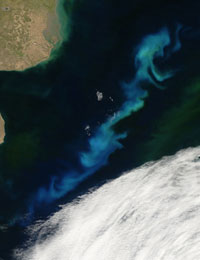 Image right: Phytoplankton appear as brilliant streaks of blue and green over the South Atlantic Ocean in this image from the Moderate-resolution Imaging Spectroradiometer (MODIS) aboard NASA’s Terra satellite on January 4, 2005. Credit: NASA GSFC

The researchers combined data from the Moderate Resolution Imaging Spectroradiometer (MODIS) aboard NASA's Terra and Aqua satellites with information collected from ships to study the water discharge, appearing as a dark plume that stretched from the Mississippi Delta, around Florida and up to the Georgia coast. MODIS detects the color of the ocean due to changes in the amount of tiny ocean plants floating on the ocean's surface known as phytoplankton, or algae and other decaying materials.

"This is the first time we have been able to estimate the amount or volume of freshwater discharged and carried over such remote distances. By combining the very detailed data from MODIS with observations from ships, we got a three-dimensional view of the Mississippi plume," said Chuanmin Hu, of the College of Marine Science, University of South Florida, St. Petersburg, Fla., and lead author of the study. By using MODIS data with information on sea surface currents and sea salt levels (salinity), the scientists estimated that about 20 billion tons of Mississippi River water reached the Florida Straits and Gulf Stream off the Georgia coast. This is about four times the volume of Lake Okeechobee, the largest lake in Florida. 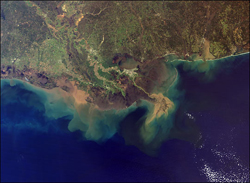 Image left: This image from MODIS aboard NASA’s Terra satellite shows the murky brown water of the Mississippi River mixing with the dark blue water of the Gulf of Mexico two days after a rainstorm. Credit: NASA NASA/University of Wisconsin-Madison

The research also shows that such plumes created by the Mississippi River can travel over large distances, more than 1240 miles (2000 kilometers).

Beyond studying the causes of such events, researchers are using satellite information with observations from ships and "ocean surface drifters" - instruments resembling balloons that travel the ocean surface, to get a better idea of how these plumes affect marine life. 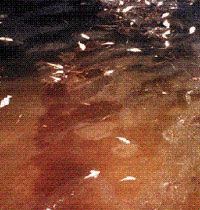 "Mississippi River water may have some impact on marine life in remote delicate ecosystems like the Florida Keys. But we are still not clear about the potential impacts of pollutants and pesticides," said Hu. "Not all effects will be bad; in fact, some light dark water events might actually protect bottom ocean dwellers, like coral, by providing them with shade."

The study is published in the July 2005 issue of Geophysical Research Letters under support of NASA, NOAA, and ONR as a contribution to the SouthEast Atlantic Coastal Ocean Observing System (SEACOOS). Coauthors include oceanographers James Nelson from the Skidaway Institute of Oceanography, Elizabeth Johns from NOAA’s Atlantic Oceanographic and Meteorological Laboratory, and Zhiqiang Chen, Robert Weisberg, and Frank Muller-Karger from the University of South Florida.

Images above: In summer 2004, scientists combined satellite images of the Gulf of Mexico and the Atlantic Ocean with ship-based measurements of salinity and water chemistry to track the spread of a large plume of Mississippi River freshwater into the Gulf of Mexico and beyond. The Moderate Resolution Imaging Spectroradiometer (MODIS) images shown here follow the freshwater plume in late July and early August. The plume appears as a dark ribbon against the lighter blue surrounding waters. The plume did not mix with sea water immediately. Instead, it stayed intact as it flowed through the Gulf, the Straits of Florida, and into the Gulf Stream. The plume of Mississippi River water stayed together and flowed up the U.S. Southeast Atlantic coast before finally mixing in so thoroughly with the ocean that it could no longer be detected by MODIS. The image were captured by the MODIS on NASA's Aqua satellite on (left to right) July 30, August 4, and August 9. Click image to enlarge. Credit: NASA/MODIS Land Rapid Response Team