Satellites Track Human Exposure to Fine Particle Pollution
When it comes to air pollution, the smallest size can do the most harm. More than a decade ago, a pioneering study by Harvard's School of Public Health showed that one of the most dangerous forms of air pollution is particulate matter 10 microns (about 0.0004 inch) or less in size. Called PM 10, this tiny airborne debris is a product of burning fossil fuels. It can be found wherever there are cars, boilers and power plants. Fires and dust storms are also sources.

Exposure to PM 10 leads to increases in heart and lung disease and is a particular threat to people who are more sensitive to particle pollution, including those with respiratory symptoms, as well as the very young and the elderly. All PM 10 is hazardous, but worst of all are the smallest particles, those less than 2.5 microns (about 0.0001 inch) known as PM 2.5. Commonly found in haze and smoke, this fine material can make its way deep into the lungs and even into the bloodstream. 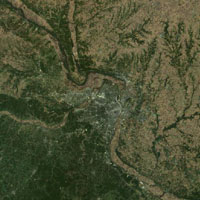 The Clean Air Act charges the U.S. Environmental Protection Agency (EPA) with determining what levels of PM 2.5 are acceptable, based on studies of its effect on human health. For the scientists studying these health effects and for regulators trying to protect the public, it's important to know just how much exposure people are receiving from this fine particle pollution.

The most detailed measurements of PM 2.5 exposure come from the Environmental Protection Agency's large network of air monitoring stations. But ground stations sample only a limited number of locations, and many rural and smaller urban areas are not covered at all. Researchers from the Harvard School of Public Health and NASA's Jet Propulsion Laboratory set out to compare the capabilities of aerosol measurements from two instruments on NASA's Earth-looking Terra satellite in predicting PM 2.5 exposure. (Aerosols are tiny particles suspended in the air). To test this idea, they tried to calculate how much PM 2.5 was in the air near the ground in the St. Louis, Mo., area. The research complements other research and applications that NASA has supported.

"We want to be able to expand on the EPA monitoring network," says Harvard University Research Fellow Yang Liu, who led the study. "The challenge is that a satellite measures something different than the EPA's ground stations. A satellite looks down and sees the whole air column from top to bottom. Our goal is to be able to convert these observations into a measure of aerosol concentrations at the surface."

With nine cameras looking down at Earth from different angles, MISR "has enormous sensitivity to aerosols," says JPL's Ralph Kahn, who participated in the study. He says that MODIS has difficulty retrieving aerosol data over bright surfaces, such as deserts and in urban areas, home to more than half of the U.S. population, whereas even in such areas, MISR can distinguish what's in the atmosphere from what's on the surface. Also, he explains, by looking at particles in the atmosphere from different directions, MISR provides information on their shape and size. "If you have a distinct cloud, such as from a fire or the plume from a volcano, you can also figure out its height."

MISR views a relatively small portion of Earth at a single time, and it produces massive amounts of highly accurate data about those portions. MODIS, on the other hand, images larger areas, yet sees aerosols in less detail. It can view the entire globe every few days and can image any individual site several times a week. MISR views individual sites about once a week. 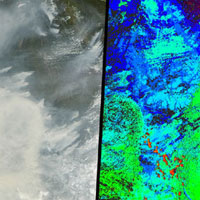 "We made two models to see how well we could predict ground-level PM 2.5 concentrations from each of the data sets and found similar results between the two, which was very encouraging," says Liu. The researchers published their findings in the March 15, 2007, special MISR issue of "Remote Sensing of Environment."

Liu said his team is now working to create a model that combines data from both instruments. "It will be difficult to do, and powerful when it works," he said.

Liu and his colleagues are also expanding their research to include data from other sensors. The two instruments "don't make daily observations of the same region," says Liu, "but they give a good snapshot of what's happening. There are other instruments, on NOAA [National Oceanic and Atmospheric Administration] weather satellites for example, that have daily and even more frequent coverage. If all goes well, this could become a new data source for studying the health effects of PM 2.5."

Remote-sensing data are not a replacement for the ground network's measurements, the researchers say. "The ground stations can get detailed information about particle size and their chemical composition -- important for understanding health effects but unobtainable from satellite instruments," says Kahn. "But we can use the satellite data to extrapolate this information in time and space."

"Satellite observations are a supplement," says Liu. "They can be good indicators in places where no ground stations are present. Also, because they can give a global perspective, satellite data may also provide information on the global health burden from air pollution." Satellite observations can also provide great insights into the transport of dust and pollutants from one state, region or country to another.