Marshes Tell Story of Medieval Drought, Little Ice Age, and European Settlers near New York City
Aside from views of cattails and blackbirds, the marshes in the lower Hudson Valley near New York City offer an amazingly detailed history of the area's climate. Sediment layers from a tidal marsh in the Hudson River Estuary have preserved pollen from plants, seeds, and other materials. These past remnants allowed researchers from Columbia University, New York, N.Y. and NASA to see evidence of a 500 year drought from 800 A.D. to 1300 A.D., the passing of the Little Ice Age and the impacts of European settlers. 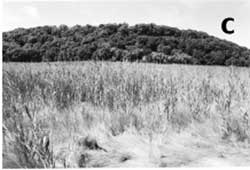 Plants provide an indicator of climate because the well-being of a species is controlled by the temperature and moisture of a region, and whether those conditions suit a type of plant. That's why if you draw latitudinal or horizontal lines around the world you'll find very similar species growing along those lines, like tropical plants around the equator, or tundra and northern or boreal forest species in a circumference south of the North Pole.

From the pollen record found in sediments in Piermont Marsh of the lower Hudson Valley, a Medieval Warm period was evident from 800 to 1300 A.D. Researchers know this from the striking increases in both charcoal, a sign of dry vegetation and fires, and pollen from pine and hickory trees. Prior to this warming spell, there were more oaks, which prefer a wetter climate. 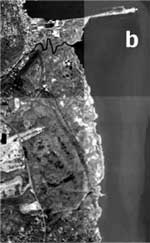 Image to left-- Aerial View of Piermont Marsh: The northern part of the marsh is evidenced by the pier at the top of the picture. A star marks the location where the sediment core was drilled. Sparkill Creek is the large tributary through the northern portion of the marsh. Tallman State Park forms the western (left) boundary to an elevation of about 100 meters (328 feet). Click on image to enlarge. Credit: D. Pederson, et. al. 2005

During this drought period, a core drilled into the marsh bed showed large influxes of inorganic soil particles, a sign of erosion. Plant roots hold soil in place, but with drought and plant deaths, more erosion occurs.

Droughts like this also make the bay saltier, and evidence of this was found by an increase in salty marsh plants, like saltmarsh cordgrass. The changing salinity of the marshes and estuaries could present future water quality issues in the event of a drought. For example, heading north up the Hudson River, the city of Poughkeepsie draws its municipal water directly from the river. Because the salinity of the river changes with drought, causing saltier water to move further north, salinity changes have the potential to affect the water supply of the city. 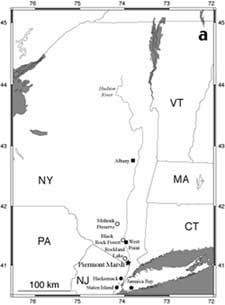 Similarly, when Europeans settled the area they cleared the forests for agriculture. The pollen record reflects this with a vast decline in tree pollen and an increase in pollen from weedy plants like ragweed, plantain, sorrel and dock. Inorganic soil particles also went up following European settlement.

The study which appeared in a recent issue of the journal Quaternary Research is important for showing how climate in this region has changed due to natural causes prior to human interventions in the area. Dee Pederson, a researcher at Columbia University's Lamont-Doherty Earth Observatory (LDEO), Palisades, N.Y., and Dorothy Peteet, a researcher at NASA's Goddard Institute of Space Studies, New York, N. Y., and LDEO, wrote the study. Peteet points out that researchers could use these methods to similarly learn about climate in other parts of the world.

The study was funded by the Hudson River Foundation, the LDEO Investment Fund and NASA.