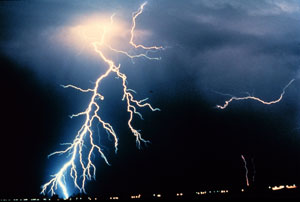 That statement usually gets people's attention when you tell them that fact. It is also a good reason to be aware of the dangers of lightning, especially as the northern hemisphere is entering summertime.

When summertime arrives officially on June 21, thunderstorms come along with it. As a result, the National Oceanic and Atmospheric Administration named the week of June 18-24 National Lightning Safety Awareness Week.

A return stroke of lightning, that is, a bolt shooting up from the ground to a cloud (after a stream of electricity came downward from a cloud) can peak at 50,000 degrees Fahrenheit (F). The surface of the sun is around 11,000 degrees F. Scientists determined that temperature more than 20 years ago by examining the light given off by a bolt of lightning. 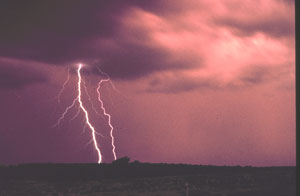 About 2,000 thunderstorms are happening around the world at any given time, and more than 8 million cloud-to-ground lighting strikes happen per day worldwide. According to the National Weather Service an average of 67 people are killed by lightning each year in the U.S. and thousands of dollars' worth of property is damaged or destroyed. Lightning causes more direct deaths than any other weather event. In 2005, there were 48 confirmed deaths and 172 confirmed injuries.

Many of NASA's lightning experts work out of NASA's Marshall Space Flight Center, located in Huntsville, Ala. Marshall manages and operates a facility with Alabama research universities called the National Space Science and Technology Center (NSSTC). At NSSTC, researchers use data from NASA satellites, aircraft and from people on field missions to better understand the science behind lightning. This research could someday help forecasters better predict and alert the public for severe weather – from thunderstorms and tornadoes to hurricanes. 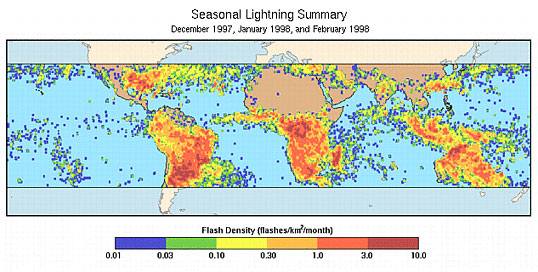 Image above: Three months of Lightning Imaging Sensor (LIS) data were combined to form a "lightning climatology map" shown here. This period corresponds with the summer season in the Southern Hemisphere and the winter season in the Northern Hemisphere. The red and orange areas indicate the greatest concentration of lightning flashes. Credit: NASA/MSFC

A couple of examples of what the NSSTC has done in lightning research include finding several cases in which lightning rates increased dramatically as severe storms developed. Since 2001, the North Alabama Lightning Mapping Array, a project operated by Marshall and NSSTC for the state of Alabama and the National Weather Service has provided 3-D lightning detection over that region. It helps forecasters with the direction that a storm is moving, and helps improve their warning lead-times by as much as 50 percent!

In 2001, NSSTC scientists created a global "map" that shows where lightning happens around the world each year. The map shows that lightning avoids the ocean, but frequently strikes in Florida, the Himalayas and central Africa. Because the map shows most lighting occurs over the land, it means lighting storms are caused by the sun's daily heating of Earth’s surface and atmosphere.

In 2002, NSSTC scientists flew an "uninhabited aerial vehicle" or UAV into thunderstorms, and gathered information about them.

Scientists around the world have been using lightning data Tropical Rainfall Measuring Mission (TRMM) satellite. The satellite was launch by the U.S. and Japan in 1997, and continues to detect lightning with an instrument called the Lightning Imaging Sensor.

NASA and other organizations continue to study lightning to understand it better and unravel its secrets. One thing that is not a secret, however, is lightning safety awareness and scientists urge people to act responsibly and seek cover whenever thunderstorms approach.