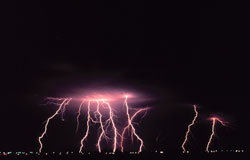 NASA encourages summer swimmers, picnickers and others to keep an eye on the sky and stay safe during outdoor activities. NASA lightning expert Dr. Dennis Boccippio, of NASA's Marshall Space Flight Center (MSFC) in Huntsville, Ala., warns that lightning safety should never be taken lightly. An average of 67 people are killed by lightning each year, and thousands of dollars' worth of property is damaged or destroyed, according to the National Weather Service.

Boccippio and the NASA lightning team study this powerful natural force year-round, using equipment on Earth and in space, to learn how lightning and severe weather interconnect, and to determine new ways to protect lives, homes and property.

NASA researchers at have created lightning maps that show where and how much lightning strikes worldwide. The maps are color coded to indicate concentrations of lightning strikes. Each frame represents average lightning activity on each day of the year. This data, compiled from space-based sensors, show how lightning strikes are not evenly distributed around the world. This data is not only important to meteorologists, but to climatologists, as well. Lightning indicates the location of large storms that release latent heat; the "fuel supply," that helps drive the Earth's climate "engine."

The National Weather Service's regional forecast offices in Alabama have been using NASA's North Alabama Lightning Mapping Array since November 2001. The data help characterize thunderstorm initiation, identify weakening and strengthening storms by the change in the rate of flashes, and evaluate the trend of the flash rate to improve severe storm detection and lead-time. Understanding lightning could help improve severe storm warning lead-time by up to 50 percent and decrease the false alarm rate for non-tornado producing storms. 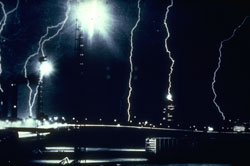 Image to right: Multiple Lightning Strikes: There are about 1800 thunderstorms in progress over the Earth's surface at any moment, and strikes hit the Earth about 100 times each second. Click on image to enlarge. Credit: FEMA

NASA's lightning research is also being applied to aviation safety. NASA technology is helping aviators avoid turbulence over offshore areas, by using surface lightning measurements and combining them with satellite lightning data and other measurements.

Image to left: Viewing Lightning From Space: There are more than 1,800 thunderstorms taking place around the world at any given instant. This movie was taken aboard NASA's space shuttle. Click on image to view animation (no sound). Credit: NASA/MSFC