Satellite Offers a Room With the Best View of Antarctica
Researchers from NASA and the U.S. Geological Survey (USGS) have woven together more than a thousand images from the Landsat 7 satellite to create the most detailed high-resolution map ever produced of Antarctica. These extraordinary images provide a stunning bird's eye view of the icy mass that has been the focus of science, myth and storytellers' imaginations alike. 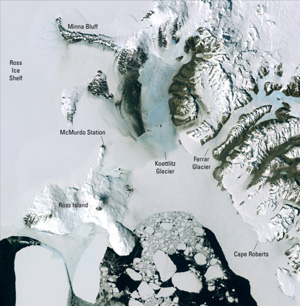 Image right: The Landsat Image Mosaic of Antarctica (LIMA) will show the Antarctic continent for the first time in high-resolution, true-color satellite images. As can be seen in this sample Landsat image of the area around McMurdo Station, LIMA will show ice shelves, mountains, glaciers, coastlines, and many of the other features that make Antarctica a fascinating and important place to study. Click image to enlarge. Credit: USGS

The single continent-wide map, called the Landsat Image Mosaic of Antarctic (LIMA), offers views of the coldest continent on Earth in 10 times greater detail than possible before.

"These images give us incredibly detailed views of the Antarctic ice sheet surface and serve as maps for many locations that have never been mapped before," said Robert Bindschadler, chief scientist of the Laboratory for Hydrospheric and Biospheric Sciences at NASA's Goddard Space Flight Center, Greenbelt, Md. Bindschadler oversaw the selection of the scenes used to create the mosaic.

Researchers at NASA, the USGS, and the British Antarctic Survey in Cambridge, U.K., with support from the National Science Foundation, have launched a Web site offering public access to the image mosaic. This site contains original images and close-ups of various areas of Antarctica, all available for download. The research group will continue to roll out additional images through this summer.

Images above: The images above shows a comparison of the same Antarctic scene from two different NASA remote sensors. (left:) The Landsat 7 satellite provides the high resolution and (right:) The Moderate Resolution Imaging Spectrometer (MODIS) instrument on the Terra and Aqua satellites provides the low resolution. The MODIS Mosaic of Antarctica (MOA), released in October 2005, is the highest resolution complete map of Antarctica available until the LIMA project is finished. Credit: (right:) NASA; (left:) USGS

According to Bindschadler, researchers will have special interest in the new ability to zoom in on areas like Antarctica's dry valleys that lie between the ice sheets. To date, only aerial images of these locations were possible, but no clear, high-resolution images until the carefully collaged images that make up LIMA.

Through special processing of images captured by Landsat 7's Enhanced Thematic Mapper Plus sensor, scientists were able to produce a true color, nearly cloud-free view of Antarctica. For the process, researchers use specialized software to stack several images of various Antarctic locations together to create one larger image. The researchers also arranged the images on top of one another in a sequence that allows clear views to the surface, removing the effects of clouds contained in some images.

"Having this capability is quite exciting. Using the Web portal, scientists as well as students, teachers and others will be able to zoom in to a specific Antarctic region, and adjust for various levels of detail," said Bindschadler. "This will be like having a room with a tremendous view, a detailed view from space aboard Landsat to peer down as if you were just above the ice sheet's surface."

LIMA is one of over 228 projects funded in conjunction with the International Polar Year (IPY), launched this month by 63 cooperating countries to improve scientific understanding of Earth's polar regions.

The U.S. Geological Survey manages the NASA-designed Earth-observing satellites of the Landsat Program, first launched in 1972. Over the past three decades, Landsat sensors have captured two million high-resolution digital photographs of Earth’s continents and surrounding coastal regions, enabling scientists to study various aspects of the planet.