Heat in the Gulf
As Hurricane Katrina barreled down on the U.S. Gulf coast, with ultimately devastating consequences, many oceanographers and hurricane forecasters were paying close attention to the upper ocean thermal conditions in the Gulf of Mexico, as the intensification of other hurricanes in that same region had been linked to the oceanic heat content. Goni and other colleagues of the National Oceanic and Atmospheric Administration's Atlantic Oceanographic and Meteorological (NOAA/AOML) were among them. Dr. Goni was able to monitor the change of intensity of Katrina as its path went over the warm waters of the Loop Current and a warm ring shed by this current a few months earlier. 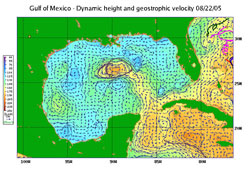 Image to right: Altimetry-derived sea surface height (color, yellows are higher and blues are lower) and surface current directions (arrows) highlight the Loop Current and a warm ring (around 89W, 27N) in the Gulf of Mexico. The trajectory over the warm ring corresponds to a surface drifter and confirms the altimetry estimates. Click image to enlarge. Credit: NASA

Satellite altimetry blended data, including those from NASA's TOPEX/Poseidon and Jason-1 missions, were used to estimate the Tropical Cyclone Heat Potential (TCHP, a measure of the oceanic heat content from the sea surface to the depth of the 26°C isotherm) in the Gulf of Mexico in near-real time. TCHP fields will be critical to scientists and forecasters to better understand the link between the ocean and the intensification Katrina and other hurricanes.

Altimeter data, combined with other remote sensing and in-situ data, are among the suite of tools currently being used by forecasters to provide both long-term seasonal forecasts of the number and strength of tropical cyclones expected in a given hurricane season and short-term forecasts of the intensity of individual hurricanes. 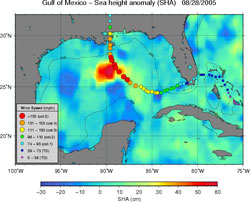 Image to left: Sea height anomaly on August 28, 2005. The path of Hurricane Katrina is indicated with circles spaced every 3 hours in the Gulf of Mexico and their size and color represent intensity (see legend). The hurricane intensified to category 5 as it passed near the warm core eddy of the Loop Current, then diminished to category 4 by the time it struck the coast. Click image to enlarge. Credit: NASA

In late August 2005 when Hurricane Katrina passed over the Loop Current and a large warm core ocean ring (top right image) it evolved quickly from a category 3 to category 5 event in a matter of 9 hours (bottom left image). The warm waters of the Loop Current appear to have rapidly fueled the storm as it targeted the coastlines of Louisiana and Mississippi, while the warm waters of the ring seemed to have helped to sustain the hurricane intensity. However, more studies will be needed to confirm this and to know the exact role that these two features played in the intensification of Katrina.

Results from current research indicates that the intensification of many hurricanes in the tropical Atlantic, Caribbean Sea, and Gulf of Mexico may be linked to the variability of warm and cold ocean water under the storm track, where some storms quickly grow stronger when they pass over warm water and weaken in areas of lower temperature. Now, monitoring the thermal structure of the upper ocean has become a key element in the study of hurricane-ocean interaction, especially with respect to the prediction of sudden tropical cyclone intensification. Warm features, such as the anticyclonic rings shed by the Loop Current and warm eddies, are characterized by a deepening of warm water (by tens of meters) towards their centers, and by different temperature and salinity characteristics than the surrounding waters. These deviations of the normal ocean thermal conditions produce variations in the sea surface height that may range from a few centimeters to more than a meter and can be readily be detected by altimeters. 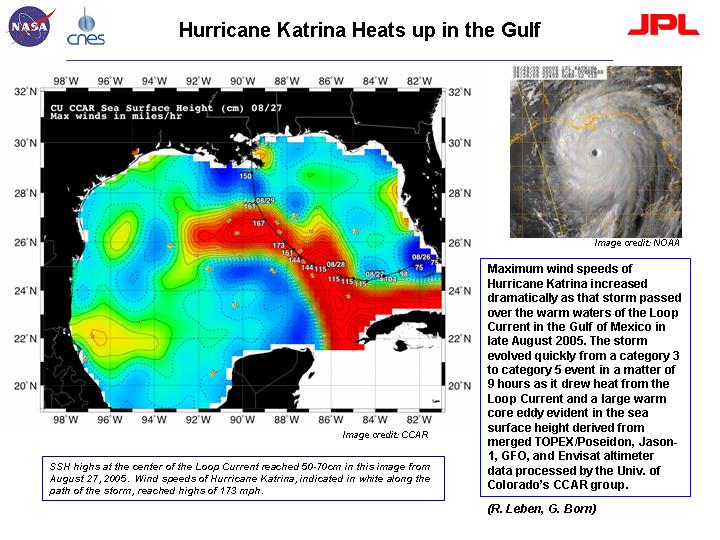 Image above: Sea surface heights at the center of the Loop Current reached 50 to 70 cm in this image from August 27, 2005. Wind speeds of Hurricane Katrina, indicated in black along the path of the storm, reached highs of 173 mph. Credit: NASA

Therefore, satellite altimeters can scope out areas of the ocean where warm water pools extend deeper below the surface than the seasonal surface warm water, and are then available as ammunition for intensifying hurricanes passing overhead. Moreover, the current suit of altimeters is now the only available tool that can monitor these regions in real-time with the proper spatial and temporal resolution for scientific studies. Tropical Cyclone Heat Potential maps, derived from altimetry and sea surface temperature data, are produced in near real-time (one day delay) and are distributed daily for all hurricane-prone ocean basins on the web (http://www.aoml.noaa.gov/phod/cyclone/data/). Similar maps are routinely used by the National Hurricane Center in Miami for improved hurricane intensity forecasts.

Merged altimeter data for this research are provided by the Naval Research Laboratory and the French space agency's AVISO data center.

Jet Propulsion Lab
› Back To Top