Barrier islands are highly dynamic places that move and change in response to ocean waves and currents. Over long time scales, barrier islands move slowly landward as sea level rises. Large storms contribute significantly to an island's landward migration, a process also known as 'barrier island rollover.' Increased water levels, large waves and strong flows remove sand from the beach and then deposit it on the bay-side of the island. Dramatic examples of 'barrier island rollover' occurred at Dauphin Island, Alabama during Hurricane Katrina. Laser altimetry (LIDAR) surveys of beach elevations were used to measure coastal changes that occurred after Katrina came ashore. Comparing LIDAR images taken at different times, shows how the coastline changes in response to each hurricane. NASA used a LIDAR insturment to map the surface of Mars.

The first set of images show three-dimensional views of island topography looking east with the Gulf of Mexico to the left and Mississippi Sound to the right.

The first image shows Dauphin in May 2004 before Hurricane Ivan. The main road on the island is seen running along the axis of the island.

The second image shows the same area after Hurricane Ivan passed over on September 16, 2004. The shoreline has receded and, in some places is located landward of the first row of homes. Overwash deposits have buried the road and some houses are missing. The third image shows the devastating impact of Hurricane Katrina. As storm surge inundated the island, waves transported sand across the width of the island and deposited it in Mississippi Sound, essentially shifting the entire island landward. After Katrina most of the houses have been completely destroyed. The red arrow in each frame points to one of the few houses that remains standing after both storms. Each red square is a destroyed house. 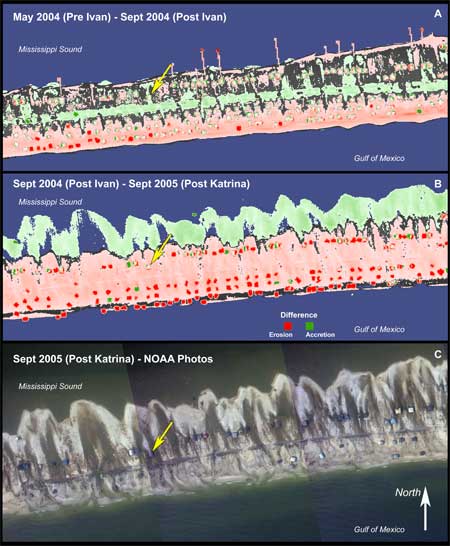 The 'barrier island roll over' is even more apparent in a series of lidar images from a map view. Sand was eroded from the beach (areas shown in red) and deposited in fan-shaped patterns (areas shown in green) on the Mississippi Sound side of the island. An aerial photograph taken by the National Oceanic and Atmospheric Administration after Hurricane Katrina in September 2005 provides a striking visual of the large overwash fans.