The Roiling Clouds of Katrina 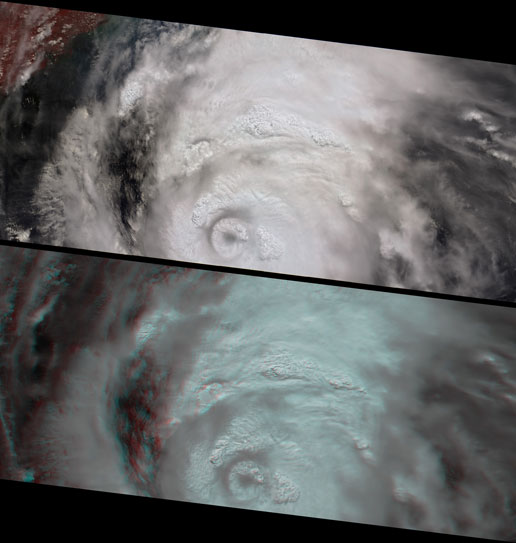 This image pair and animation (Click on image to view animation) from NASA's Multi-angle Imaging SpectroRadiometer (MISR) shows the strong convective development of Hurricane Katrina on Saturday, August 27 as it moved west through the Gulf of Mexico. Over 7 minutes during which all 9 MISR cameras viewed Katrina, the animation captures the cloud-top sides, the counterclockwise rotation of the eyewall, and the bubbling growth of the towering cloud structures. At this time, Katrina was undergoing rapid development -- it had just been upgraded to a Category 3 hurricane, and within 24 hours it would reach Category 5. On Monday morning when the eyewall made landfall over the United States, it was again a Category 4 storm. Hurricane Katrina is one of the most powerful and destructive storms on record for the Atlantic Basin.

The animation progresses from MISR's most forward pointing camera, which views the scene first, to the most backward pointing camera, which views the scene last. It was created by registering the views from all 9 cameras to high clouds within the eyewall. North is at the top. The convective cloud towers, especially those along the eastern sides of the inner and outer eyewalls, attain the highest altitudes and indicate that the storm is strengthening. Those areas that do not exhibit cloud-top convection are probably influenced by vertical wind shear, and tend to be lower than the towering cloud structures.

The vertical and horizontal development of the convective clouds and the formation of an outer ring of growing clouds (referred to as an "eyewall replacement cycle") also indicates rapid strengthening. During this stage of hurricane development, an outer band of clouds may gradually move inward to replace the existing hurricane eyewall, causing the central pressure to increase and weaken the storm in the short term, but eyewall replacement may sometimes be a forerunner for rapid strengthening in the longer term. This was the case with Hurricane Katrina, whose central pressure increased slightly on Saturday, but then dropped again significantly on Sunday when Katrina became a Category 5 storm. Observing the development of a concentric eyewall at this spatial and temporal resolution is a unique feature of these MISR observations.

The top panel of the still images is a false-color view (near-infrared, red, and blue displayed as red, green and blue) from MISR's nadir (vertically downward pointing) camera. The vegetated Alabama coast in the upper left-hand corner appears here in red hues. The bottom panel is a 3-D stereo anaglyph created with red band data from MISR's 70° forward-viewing and 60° forward-viewing cameras, displayed as red and green/blue, respectively. For the still images, north is at the left. To observe the height variations in 3-D, you will need to use red/blue glasses. Information on ordering glasses can be found at http://photojournal.jpl.nasa.gov/Help/VendorList.html#Glasses.

MISR stereo height retrievals (not shown here) indicate that the highest clouds reach 18 - 19 kilometers. The stereo anaglyph shows relative height variations and enhances the appearance of thin clouds, such as those that mark the series of gravity waves north-east of the eyewall. Atmospheric gravity waves are caused by air displacements in an otherwise stable air layer. In this case, the gravity waves are above the hurricane arms in the upper troposphere, and were probably generated as the towering storm updraft tried to push into the stable air between the troposphere and the stratosphere (known as the tropopause). Some of Katrina's cloud tops were about 2 kilometers above the tropopause. Such high "overshooting tops" are also characteristic of strong and rapidly growing storms.

The Multi-angle Imaging SpectroRadiometer observes the daylit Earth continuously, viewing the entire globe between 82° north and 82° south latitude every nine days. The still images each cover an area of about 827 kilometers by 380 kilometers, and the animation covers an area of about 202 kilometers by 214 kilometers. The data products were generated from a portion of the imagery acquired during Terra orbit 30280 and utilize data from blocks 69 to 74 within World Reference System-2 path 17.

Greg McFarquhar
University of Illinois at Urbana-Champaign
› Back To Top