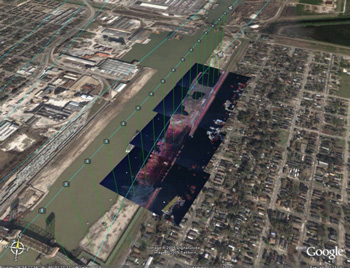 When Hurricane Katrina made landfall in August 2005, it changed the look of some of the coastlines of three U.S. states. Now, using Google Earth’s software on the Internet, people can see the before and after affects, thanks to detailed images from NASA and the U.S. Geological Survey (USGS).

Image to right: When Hurricane Katrina made landfall in August 2005, it changed the look of some of the coastlines of three U.S. states. Now, using Google Earth’s software on the Internet, people can see the before and after affects, thanks to detailed images from NASA and the U.S. Geological Survey (USGS). Credit: USGS

The images on Google Earth show changes that Hurricane Katrina made to the Gulf coast from Panama City, Fla. to New Orleans, La.

Hurricane Katrina made landfall in south Plaquemines Parish, La., near the towns of Empire, Buras and Boothville, on Aug. 29, 2005, at approximately 7:10 a.m. CDT. It caused widespread destruction in Louisiana, Mississippi, and Alabama and turned out to be the most expensive hurricane in the history of the United States, causing an estimated 80 billion dollars in damages, according to the National Oceanic and Atmospheric Administration. Katrina also turned out to be the deadliest U.S. hurricane since 1928, claiming at least 1,300 lives.

The coastlines of those states were forever changed. NASA, using an Atlantic Global Research contract aircraft and the agency’s own advanced technology, made it possible to see how much and what type of damage that Katrina caused when it came ashore.

Images above: These are before and after images of Gulfport, Mississippi's shoreline. On the left is an image before Katrina hit, right is the aftermath. Katrina destroyed most of the structures and vegetation. The road that runs along the bottom of the images is State Route 90, or East Beach Boulevard. This neighborhood includes the streets of Midway Avenue, Bouslog Street, and Nixon Street. It is located on the Gulf of Mexico, and east of downtown Gulfport, and just west of Mississippi City, MS. Click on image to enlarge. Credit: NASA

The changes to the coasts were cataloged in detail using NASA's laser mapping system called EAARL (Experimental Advanced Airborne Research Lidar) onboard an airplane. EAARL uses a laser to "see" and measure distance to a surface. EAARL can be used to get closer looks at things like coral reefs, sandy beaches, coastal vegetation, and trees.

During the month of September, 2005, 250,000 pictures were taken over 5 days of flying over the coastlines.

The EAARL Principal Investigator, Charles W. Wright, of NASA’s Wallops Island Flight Facility, Wallops, Va., placed the imagery online at Google Earth. "This is the first time that I can remember such an easy-to-use tool putting so much data at the fingertips of so many people with so little effort,” Wright said.

Images above: These are before and after Hurricane Katrina images of a water park in Gulfport, Mississippi. On the before image (left), the blue wavy lines are the water park slides, with a building to the left of it. In the after image, the water slide and building have been completely demolished and washed away by Hurricane Katrina. Click on image to enlarge. Credit: NASA Goddard Space Flight Center

Wright said that the people involved with the project were busy working to bring the lidar data of the New Orleans levees online for FEMA, and had not anticipated that they would be bringing the photography online.

The U.S. Geological Survey’s Coastal and Marine Geology Program investigates the how much coastlines change due to hurricanes and other powerful storms. A big benefit to using this is that it will help people make decisions on where to rebuild.

To see NASA imagery on Google Earth, first download Google Earth to your computer from the Web: http://www.earth.google.com and then open the instructions by clicking here (.pdf file).

For more information about EAARL, please visit on the Web: http://inst.wff.nasa.gov/eaarl.