NASA Satellite Identifies the World's Most Intense Thunderstorms
A summer thunderstorm often provides much-needed rainfall and heat wave relief, but others bring large hail, destructive winds, and tornadoes. Now with the help of NASA satellite data, scientists are gaining insight into the distribution of such storms around much of the world.

By using data from the NASA Tropical Rainfall Measuring Mission (TRMM) satellite, a study published in the August 2006 issue of the Bulletin of the American Meteorological Society identified the regions on Earth that experience the most intense thunderstorms. The strongest storms were found to occur east of the Andes Mountains in Argentina, where warm, humid air often collides with cooler, drier air, similar to storms that form east of the Rockies in the United States. Surprisingly, some semi-arid regions have powerful storms, including the southern fringes of the Sahara, northern Australia, and parts of the Indian subcontinent. In contrast, rainy areas such as western Amazonia, Southeast Asia, and Indonesia experience frequent storms, but relatively few are severe. Northern Pakistan, Bangladesh, and parts of Central Africa also experience intense thunderstorms.

"TRMM has given us the ability to extend local knowledge about storms to a near-global reach," said lead author Edward Zipser, University of Utah, Salt Lake City, Utah. "In addition to containing the only precipitation radar in space, TRMM's other instruments provide a powerful overlap of data that is extremely useful for studying storms." 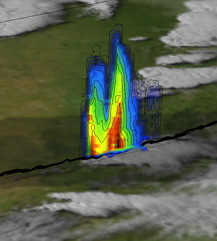 Image left: This image, created from data provided by the Tropical Rainfall Measuring Mission (TRMM) satellite, shows a vertical cross section through a severe thunderstorm over western Oklahoma on May 4, 2003. While appearing as a single cloud in the GOES satellite visible image (white regions in the image background), the TRMM precipitation radar identified three distinct precipitation cores, exaggerated to show detail. Light rain and snow (in the colder, upper reaches of the cloud) are shown in blue, while the most intense precipitation is shown in red. The thin black lines trace contours of constant rainfall intensity. Credit: NASA/GSFC

The researchers examined global thunderstorm data supplied by TRMM from 1998-2004. To determine an individual storm's intensity, they specifically examined the height of radar echoes, radiation temperature, and lightning flash rate, each measured by separate TRMM instruments.

The study also confirmed previous findings. For example, the locations of the heaviest rainfall on Earth - usually in tropical oceans and along certain mountain slopes - rarely coincide with the regions of most intense storms. They also found that the strongest storms tend to occur over land, rather than over the oceans. 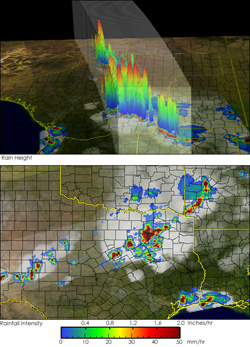 Image right: These images show a snapshot of thunderstorms over Texas on April 30, 2004, using data from the TRMM satellite. The top image shows raindrops or larger ice particles that have been carried aloft by strong rising air currents in the storms. Blue, green and red correspond to low, moderate and high heights, respectively. Click image to enlarge. Credit: NASA/GSFC

"Prior to TRMM, we could only study individual storms that were captured by a ground-based radar or lightning network," said co-author Daniel Cecil, University of Alabama-Huntsville, Huntsville, Ala. "Those instruments are not available in many places and trying to find an interesting storm that was simultaneously observed by a satellite required remarkable luck; but TRMM has been supplying a variety of measurements from individual storms around the world for nearly nine years now."

While each TRMM instrument measures different aspects of a storm, the researchers found that the data from each usually matched quite well, agreeing on the location and distribution of the strongest storms.

"The results from this study help to quantify the differences in the type and intensity of thunderstorms that occur in different climate regimes around the world," said Cecil. "The effects on the atmosphere of an intense, monstrous thunderstorm over Argentina or Oklahoma contrasts greatly with the effects from a more ordinary storm over the Amazon basin."

In the future, and as the dataset from TRMM continues to increase, these observations will be used to test whether computer models used for climate prediction and weather forecasting are accurately capturing the details of thunderstorms. If not, scientists will have the details necessary to build better, more realistic models that will aid meteorologists in providing more accurate forecasts.

The Tropical Rainfall Measuring Mission (TRMM) is a joint mission between NASA and the Japan Aerospace Exploration Agency (JAXA) designed to monitor and study tropical rainfall.