NASA Airplane Joins California Fire Battle
A high-tech NASA research airplane is helping firefighters in southern California get better up-to-the-minute information about the status of the blazes they face. It's a bittersweet moment for the NASA technicians and pilots who fly the Ikhana aircraft remotely. Sweet, because they get to use cutting edge technology in a real-world application that could help save lives and property. Bitter, because this mission is born from tragedy, as more than 13 fires sweep across southern California. 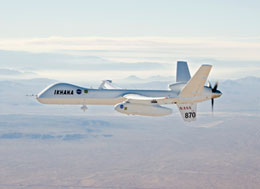 In a cavernous white hangar bay at NASA's Dryden Flight Research Center on Edwards Air Force Base in California's Mojave Desert, technicians hovered over computer screens Tuesday afternoon, preparing Ikhana to mount its important mission Wednesday morning. Outside, Ikhana waited for the order to fly. On the horizon in front of the aircraft a huge billow of smoke snaked ominously westward from the Arrowhead fire, 70 miles distant.

Ikhana is a special NASA civil variation on the Predator B remotely piloted aircraft. A pod weighing more than 400 pounds is carried externally on the white Ikhana, bearing thermal-infrared sensors that can electronically see through smoke, revealing fire hotspots. Images downlinked from Ikhana are superimposed over Google Earth maps of the fire area, giving fire commanders almost instant feedback on the intensity of the blazes, and allowing them to make informed decisions on how best to fight the fires. 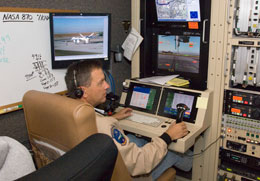 Ikhana's gracefully flexed wings took the scientific airplane aloft at 8:45 a.m. Wednesday, October 24. The blue desert sky was bordered by a pall of white smoke on the southern horizon. Time for Ikhana to go to work.

NASA's Dryden and Ames research centers each share in the success of Ikhana. Conceived as a research platform, Ikhana has been pressed into real-world service several times this year in support of firefighters. The newest sortie responds to a call from the California governor's office. NASA, state officials, the Federal Aviation Administration (FAA), the U.S. Forest Service, and Ikhana's manufacturer, General Atomics Aeronautical Systems Inc., all leaned forward to make this flight happen.

Ikhana can stay aloft for many hours, while its earthbound pilots switch out in shifts as needed. Its use in the national airspace system is closely coordinated with the FAA to ensure safe operations. 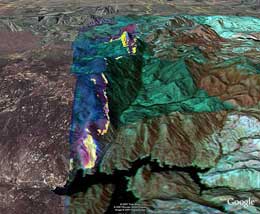