NASA's ICESat Satellite Sees Changing World Affecting Many
The Earth is a dynamic entity, and scientists are trying to understand it. Various things in nature grow and shrink, such as ice sheets, glaciers, forests, rivers, clouds and atmospheric pollutants, serving as the pulse of the planet and affecting many people in many walks of life. Scientists using NASA's Ice, Cloud, and land Elevation Satellite (ICESat) are measuring the height of these dynamic features from space with unprecedented accuracy, providing a new way of understanding our changing planet. ICESat has lasers onboard that help it make the most accurate measurements ever. 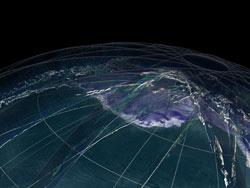 Image/animation to right: The Geoscience Laser Altimeter System (GLAS) on ICESat is a "laser radar" that profiles the height distribution of clouds and aerosol particles in the atmosphere, along with the surface height. Each 175m along the satellite orbit track a profile is obtained. When the profiles are pieced together, as in this animation, they form a continuous curtain of data dramatically showing the structure of clouds and aerosol, such as dust, in the atmosphere. In the animation is shown all of the data for the globe obtained on one day - October 1, 2003. For the first time scientists have a direct and precise measurement from space of the true 3D distribution for aerosol layers and clouds. Click on image to start animation. Click here for hi resolution image from the animation. (2.1 MB) Credit: NASA

Focus on the Freeze

Recently ICESat confirmed accelerated movement of glaciers in the Antarctic Peninsula, following the breakup of the floating ice shelf into which the glaciers flowed. ICESat also confirmed that part of the West Antarctic ice sheet has been the increasingly getting thinner. By knowing all of these changes in snow and ice, scientists have a better idea of how melting areas affect the rise of sea level.

Image to left: ICESat Studies Ice Sheets to Confirm Change: The recently reported acceleration of glaciers in the Antarctic Peninsula, following ice shelf disintegration, and the increased ice thinning rates on part of the West Antarctic ice sheet have been based, in part, on ICESat measurements of elevation changes. This is an image from October 2002, from NASA's MODIS instrument on the Terra satellite. Broken sea ice covered Antarctica's Bellinghausen Sea from October and November 2002. ICESat data helps map the thinning Arctic ice pack as well. Click on image to enlarge. Click here for a high resolution copy of the image.Credit: NASA

Picture a polar bear on an icy surfboard. ICESat is also measuring the height of "Sea Ice Freeboards," or ice and snow that are floating above the ocean's surface, to an average between 12 to 16 inches (30 to 40 centimeters). Imagine being able to determine how thick an "icy surfboard" is by only a foot. Watching the changes in the thickness of sea ice is necessary for reliably forecasting the possible disappearance of the Arctic sea ice pack during the summertime months.

In winter 2004, ICESat showed thicker sea ice grouped together in its usual place near the Canadian Arctic than it was in 2003. ICESat also showed a larger area of thinner ice in the Beaufort and Chukchi Seas where the summer ice cover has been rapidly decreasing. The location and amount of ice is important to climatologists and also ships that travel those seas.

Capturing the Clouds for Clues on Climate and Weather

Everyone knows what a cloud looks like, but scientists need to know what percentage of clouds cover the Earth everyday, in order to make their computer climate models and weather forecast computer models work better. ICESat has provided the most accurate figure to date, and tells us that 70 percent of the world is cloud covered. Previous estimates ranged from 50 to 75 percent.

Image to right: ICESat Studies the World's Clouds: ICESat has helped NASA scientists get an accurate picture of the world's cloud cover. ICESat measurements show that 70% of the world is cloud covered ICESat's assessment is arguably the most accurate to date. Pictured here are Cumulus clouds. Click on image to enlarge. Credit: NOAA/Historic NWS Collection

ICESat has also allowed scientists to see in 3-D the clouds that form in the upper atmosphere near the poles, called "polar stratospheric clouds." These clouds are responsible for the formation of the "ozone holes" over the poles where a break down the protective ozone layer in the stratosphere occurs in the spring.

The layer of the atmosphere below the stratosphere is called the troposphere. The troposphere can be divided into two parts, a planetary boundary layer, PBL, extending upward from the ground to a few thousand feet high, and a "free atmosphere" that lies above it. ICESat provided the first global estimation of the top of the PBL. Since the PBL is where heat and moisture from the surface is held, its height is an important new observation for computer models that predict climate and weather. It's also the place where pollution gets trapped down at the surface where we live. Some places we know it as smog on the ground.

Pollution affects everyone. Over the whole world the small particles in man made haze are now known to be an important factor causing the climate to change. We now have the first global measurement from ICESat of the height distribution of these tiny particles of pollution.

Campers, land managers, and computer climate modelers have some things in common. They all wonder about how high a forest grows, the height of mountains and depth of valleys, and the height of rivers and lakes. ICESat is helping to answer all those questions.

Image to left: ICESat Measures Forest Heights: ICESat measures forest height in flat areas to an accuracy of about 1 meter (3.2 feet) and in rugged, mountainous areas, when combined with topography data from the Shuttle Radar Topography Mission, to an accuracy of about 5 meters (16.4 feet). Knowing the height of forests is a key factor that enables an accurate estimate how much carbon is stored in trees. This is a picture of the Amazon rainforest near Manaus, Brazil. Click on image to enlarge. Click here for a high resolution copy of the image.Credit: Don Deering, NASA/LBA Project

"ICESat is making unprecedented measurements of the height of forests from space," said David Harding, of NASA's Goddard Space Flight Center in Greenbelt, Md. Traditional satellite images tell us about how far a forest extends, but not the height of the top, or canopy of a forest. Scientists are interested in knowing that, because it clues them into how much carbon is absorbed in trees. That's important because carbon dioxide is a key greenhouse gas that traps heat in the lower atmosphere and warms the Earth. ICESat's forest top measurements are accurate down to one meter (3.2 feet).

Image to right: Mapping the Elevation of the Land: This image from ICESat data depicts land elevations down to 1 kilometer (3/5ths of a mile) in the northwestern U.S. acquired during a 33-day period in Feb-March, 2004. The combination of ICESat and Shuttle Radar Topography Mission data will produce the most accurate global topographic data available for the Earth. Credit: NASA

In addition to vegetation or forest height, ICESat also provides very precise measurements of land elevations. ICESat's data is being combined with data from the Shuttle Radar Topography Mission (SRTM), a joint mission by NASA, JPL, and the Department of Defense flown in 2000, to create the most accurate global topographic data available for the Earth.

In the face of growing worldwide populations, monitoring and managing global water resources are becoming increasingly important. ICESat can measure the changing height of inland water bodies, including rivers, lakes, reservoirs and wetlands. These measurements can even be made of water surfaces even where they are covered by vegetation, such as in flooded forests of the Amazon.

Image to left: Seeing Amazon River Height from Space: ICESat profiled the elevation of the Amazon basin during a 33-day period in Feb-March, 2004. Measurements can even be made of water surfaces even where they are covered by vegetation, such as in flooded forests of the Amazon. ICESat's high resolution is seen on this image is down to 1 kilometer or 3/5ths of a mile. Click on image to enlarge. Credit: NASA

ICESat's new data, collected around the globe in 2003 and 2004, has given scientists the ability to see the way many things around the Earth change, from the polar ice sheets and oceans to rainforests.