NASA's ICESat: One Billion Elevations Served
NASA's Ice, Cloud and land Elevation Satellite (ICESat) fired its one billionth laser shot earthward on Nov. 18, to obtain elevations from objects on the land, sea and in the air. 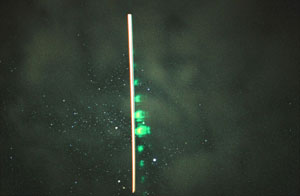 Image to right: ICESat's green laser pulses appear in the sky. Scientists and engineers from the Center for Space Research at the University of Texas at Austin photographed ICESat laser pulses in the sky from Bonneville Salt Flats, Utah on Sept. 30, 2003. The series of near-circular green spots in the sky picture are caused by the green-laser pulses illuminating thin clouds or aerosols in the atmosphere. In a clear sky, the laser light from the satellite would appear as a bright green star. The white streak parallel to the green spots is from lights on an aircraft used to photograph both the infrared and green laser spots on the ground. The small white spots are stars. Click image to enlarge. Credit: NASA/University of Texas 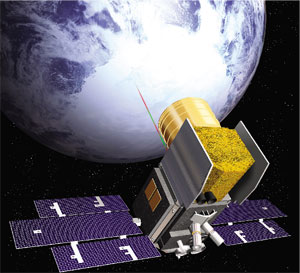 The principal mission of ICESat is to measure the surface elevation of the large ice sheets covering Antarctica and Greenland. Measurements of elevation-change over time will show whether the ice sheets are melting or growing as the Earth's climate undergoes natural and human-induced changes.

The instrument on ICESat that makes the claim is the Geoscience Laser Altimeter System (GLAS) instrument. GLAS fired its one billionth shot on the morning of Friday, November 18. "One billion shots equal one billion elevation measurements around the world of land, sea clouds, etc." said Waleed Abdalati, head of the Cryospheric Sciences Branch, Hydrospheric and Biospheric Sciences Laboratory, at NASA's Goddard Space Flight Center, Greenbelt, Md. "That number tops the 670 million shots from Mars Orbiter Laser Altimeter, an instrument currently in orbit around Mars on the Mars Global Surveyor spacecraft," he said. 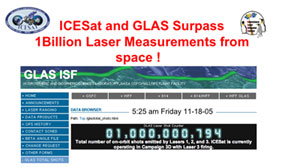 Image to right: The GLAS instrument on ICESat fired its 1 billionth shot Nov. 18, 2005. This is a screen from the ICESat web counter on that day. For comparison, the MOLA laser count (the next highest) reached 670 million. Credit: NASA

GLAS sends short pulses of green and infrared light though the sky 40 times a second, all over the globe, and collects the reflected laser light with a one-meter telescope. It also fires a fine laser beam of light that spreads out as it approaches the Earth surface to about 65 meters in diameter. On its way to the surface, those photons or particles of light bounce off clouds, aerosols, ice, leaves, ocean, land and more providing detailed information on the vertical structure of the earth system.

Image to left: Based on recent research using NASA's airborne laser altimeter, scientists have identified pronounced thinning of Greenland's ice cap. In the following animation, blues indicate areas where the loss of ice is greatest, and yellows indicate regions that are apparently thickening. Gray areas indicate no significant change in ice thickness there. Notice how the thinning is most severe at the coasts. As ice melts near the edges, it gives up moisture to the slightly warmer air around it. That air rises to higher altitudes inland and the moisture precipitates out as snow, increasing inland elevations. Thus, a slight thickening in the interior supports observations of a greater net loss to the overall sum of Greenland's ice cap. Credit: NASA 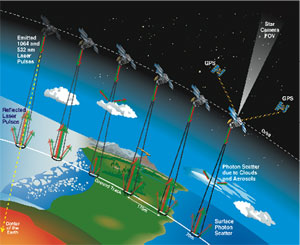 Image to right: ICESat orbits the Earth every 100 minutes firing laser pulses toward the Earth surface. By measuring the travel time of the laser pulse to the surface and back to the satellite, the elevation of the Earth, ocean, cloud top surface etc. can be determined with unprecedented accuracy. Credit: NASA

ICESat was launched on January 3, 2003 from the Vandenberg Air Force Base, Calif.