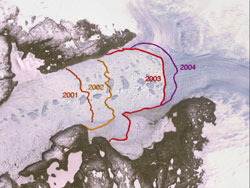 Image/animation to right: Jakobshavn Isbrae in Greenland is the fastest moving glacier in the world and is a major component of the mass balance of the continental ice sheet. Starting in late 2000, following a period of slowing down in the mid 1990s, the glacier showed significant acceleration and nearly doubled its discharge of ice. The following imagery from the Landsat satellite shows the retreat of Jakobshavn’s calving front from 2001 to 2004, which is believed to have contributed to this rapid acceleration. Click on image to view animation. Click here for high resolution JPG. Credit: NASA/USGS

Two researchers from NASA Goddard Space Flight Center (GSFC), Greenbelt, Md., and a glaciologist from the University of Colorado's National Snow and Ice Data Center, Boulder, Colo., will discuss new findings related to Earth's ice cover at a press conference on Dec. 14 at the 2004 meeting of the American Geophysical Union in San Francisco, Calif.

Waleed Abdalati, a NASA GSFC researcher, has worked with colleagues on a slew of recent papers on glaciers and ice sheets in the Northern Hemisphere. Bill Krabill of NASA Wallops Space Flight Center, Wallops Island, Va., Abdalati and others calculated that Greenland's contributions to sea level rise nearly doubled in recent years, from 0.13 millimeters (mm) (.005 inches) per year in the mid 1990s, to 0.25 mm (.01 inches) per year from 1997 to 2003. Krabill's study measured steady thinning in the region's lower elevations near the coasts. 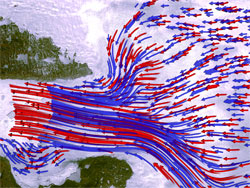 Image/animation above: Between 1992 and 2003, the velocity of the Jakobshavn glacier has nearly doubled. The following animation shows the glacier’s 1992 velocity in red and its 2003 velocity in blue. Note how both the ice stream and adjacent land ice accelerate between 1992 and 2003, but at different rates. Most of the acceleration took place after a relatively stable period between 1992 and 1997. Data were derived from the Synthetic Aperture Radar Data from the European Resource Satellite (ERS) and Landsat satellites. Click on image to view animation. Click here for a high res jpg of 1992. Click here for a high res image of 1992-2003. Credit: NASA/USGS

A recent NASA paper in Nature found that the world's fastest glacier, called the Jakobshavn Isbrae, nearly doubled its speed from 1997 to 2003. The speedy ice stream's quickening coincided with a break up of the floating ice that extends from the glacier out into the ocean, called an ice tongue. In 2003, this one glacier added to the world's oceans an amount of water equal to about 4 percent of the estimated rate of sea level rise.

Abdalati also published a paper in the Journal of Geophysical Research assessing the contributions of the Canadian ice caps to sea level rise. During the late 1990s they contributed an estimated 0.065 mm (0.002 inches) per year, which, while not as large as those of Greenland and neighboring Alaska, is still quite significant. Perhaps more significant is the fact that like Greenland and Alaska the rate of ice loss appears to have accelerated in recent years.

Image/animation to left: Arctic perennial sea ice has been decreasing at a rate of 9% per decade, with the most significant loss appearing in the past three years. This animation, derived from the Defense Meteorological Satellite Program (DMSP) Special Sensor Microwave Imager (SSMI), shows the annual minimum sea ice extent and concentration for 25 years, from 1979 to 2004. The year 2002 showed the lowest level of sea ice on record, with 2003 and 2004 not far behind. Click on image to view animation. Click here for a high res jpg image of 2004 sea ice. Credit: NASA

Meanwhile, the Arctic Ocean's perennial sea ice, or the sea ice that lasts all year long, continues to decline. Floating sea ice blankets the ocean surface, and does not contribute to sea level rise. But it is an important part of the climate system because the expansive white ice reflects the sun's heating rays, prevents the oceans beneath it from absorbing more heat, influences ocean circulation, and regulates Earth's climate. Between 2002 and 2004, Arctic sea ice has been exceptionally low. 2002 set a record for the lowest amount of late summer sea ice since satellite measurements of the area began in 1978. Josefino Comiso of NASA's GSFC reported that between 1978 and 2000, the Arctic perennial sea ice declined by 8.9 percent per decade. The trend is now 9.2 percent per decade. These low levels continue to be sustained in 2003 and 2004.

While a few abnormally cold summers would help sea ice survive the summer melt, Comiso's studies have found that on average, during the past 22 years, the Arctic warming rate is about 8 times higher than estimates of warming rates over the last 100 years. 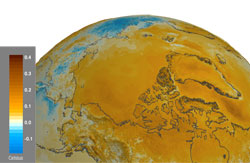 Image/animation to right: This image shows the 22-year surface temperature trend over the Arctic region. Blue hues indicate areas that are cooling; gold hues depict areas that are warming. Lighter colors indicate less change while darker colors indicate more, with temperature steps starting from zero degrees Celsius in increments of .02 degrees. Warming in the Arctic is asymmetrical, with the most significant warming over much of North America and some areas of cooling over Eurasia. Click on image to enlarge. Click for a high res jpg image. Credit: NASA

In much of the Antarctic, a general cooling has been observed and sea ice has mostly increased over the last 30 years but the Antarctic Peninsula has been an exception since it has warmed and similar rapid changes as those found in the northern hemisphere have been observed.

For example, in the eastern Antarctic Peninsula, very rapid climate warming began in the 1950s, causing mean temperatures to increase by about 2.5 degrees Celsius (4.5 Fahrenheit), according to Scambos. As temperatures have warmed, land and sea ice have melted. In March 2002, the Rhode-Island-sized Larsen B ice shelf collapsed, the largest in a series of such retreats that began to take place around 1985 and have steadily increased. 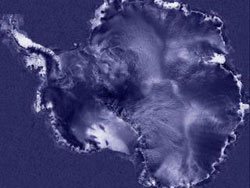 Image/animation to left: Over the course of three months in early 2002, Antarctica’s Larsen B Ice Shelf broke into many pieces, releasing several thousand square kilometers of ice into the ocean, and causing acceleration of adjacent glaciers. Although speeding up and enhanced discharge of glaciers surrounding the Larsen B Ice Shelf may not significantly raise sea level, glaciers associated with larger Antarctic ice shelves could have a more pronounced effect. This animation was created using imagery from the Moderate Resolution Imaging Spectroradiometer (MODIS) instrument on NASA’s Terra satellite. Click on image to view animation. Click here for the Scientific Visualization Studio's MODIS: Larsen B Ice Shelf Collapses webpage Credit: NASA

In the aftermath of this collapse, two NASA studies, one led by Scambos, showed that glaciers flowing into the bay areas behind the Larsen 'B' ice shelf accelerated by 3- to 8-fold in just 18 months after the breakup. This finding points to similar mechanisms as those discovered by Abdalati and colleagues in Greenland's Jakobshavn ice stream. Satellite images revealed that the Antarctic glaciers' speed-up began almost immediately after the collapse of the shelf. Data from NASA's new ICESat satellite indicate that the trunk of one glacier decreased in elevation by over 30 meters in just six months.

Image/animation above: The following Landsat image series from January 2000 to February 2003 illustrates the dynamic relationship between the Larsen B Ice Shelf and the Hektoria Glacier before, during, and after the Larsen break-up. The black contour line indicates the grounding line for the Larsen B Ice Shelf and the red arrow indicates the flow of the Hektoria Glacier system. Click on image to enlarge. Credit: NSIDC