NASA Satellites Record a Month for the Hurricane History Books
July 2005 was a record-setting month in the world of Atlantic Ocean hurricanes. That's because there were more named storms recorded in the month of July than ever in the hurricane history books. 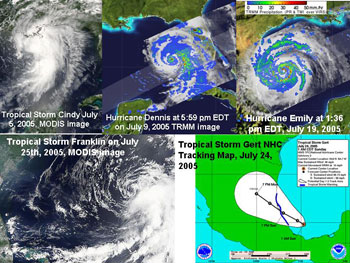 Image to right: Five named tropical cyclones in the month of July 2005 broke the record for the highest number of storms during that month. Cindy (top left) made landfall in Louisiana. Dennis (top center) hit Cuba and landed in the Florida Panhandle. Emily (top right) landed in northeastern Mexico. Franklin (bottom left) swept by the Bahamas and into the north Atlantic Ocean. Gert made landfall on Mexico's east coast. Click on image to enlarge. Credit: NASA (4 images) and NOAA (1 image)

Satellites from NASA and the National Oceanic and Atmospheric Administration (NOAA) had a busy month in July following the five named storms in July: Cindy, Dennis, Emily, Franklin and Gert.

During July, 2005 NASA and NOAA investigators flew sophisticated research aircraft within and above several of these storms, as part of NASA's Tropical Cloud Systems and Processes (TCSP). TCSP was undertaken to better understand the processes that lead to the birth and intensification of hurricanes.

"Hurricane Emily was the most powerful hurricane that NASA has ever flown over," stated Dr. Jeffrey Halverson, Severe Weather Meteorologist, at NASA's Goddard Space Flight Center, Greenbelt, Md. "Emily and Dennis were both strong hurricanes, meaning Category 3 or higher; it is highly unusual for two strong storms to develop in close succession as early as July in the Atlantic hurricane season." 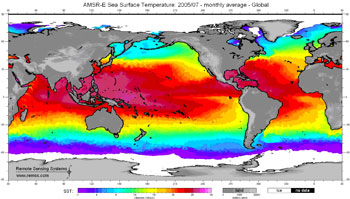 Image to left: This image shows sea surface temperatures averaged during the month of July 2005. It was compiled by data from the Advanced Microwave Scanning Radiometer (AMSR-E) aboard NASA's Aqua satellite. Click on image to enlarge. Credit: Remote Sensing Systems

NASA provides researchers and forecasters with space-based observations, data assimilation, and computer climate modeling. NASA also provides measurements and modeling of global sea surface temperature, precipitation, winds and sea surface height, all ingredients that contribute to the formation of tropical cyclones (which is the general name for typhoons, tropical storms and hurricanes).

What was the reason for this record setting number of named storms? According to NASA satellite data, the winds and sea surface temperatures were perfect during the month of July to help these five tropical cyclones form. 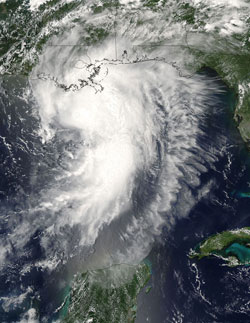 Image to right: Tropical Storm Cindy was preparing to make landfall over southeastern Louisiana on July 5, 2005, when the Moderate Resolution Imaging Spectroradiometer (MODIS) on NASA’s Aqua satellite captured this image. At the time, the National Hurricane Center reported the storm to have winds of 70 miles per hour, just 4 miles per hour under hurricane status. After coming ashore near the mouth of the Mississippi River, Cindy moved northeast, drenching Alabama with rain. Though the storm left thousands without power and triggered some flooding, though no serious damage has been reported. Credit: NASA

During July, the amount of wind shear in the Atlantic was minimal. The NASA-provided SeaWinds instruments aboard Japan's Midori 2 and NASA's QuikSCAT satellites can detect these winds before other instruments, providing early notice of developing storms to forecasters and scientists.

Warmer-than-normal sea-surface temperatures were also a key player in the record number of storms. Tropical cyclones need ocean surface water temperatures of 82 degrees Fahrenheit (F) or greater to fuel the evaporation and rising air that helps create the thunderstorms in a tropical cyclone. 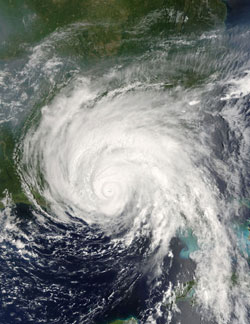 Image to left: Hurricane Dennis was bearing down on the Gulf Coast of the United States on July 10, 2005, at 12:15 p.m. (16:15 UTC) when the Moderate Resolution Imaging Spectroradiometer on NASA’s Terra satellite captured this image. With winds of 135 miles per hour (217 kph), Dennis was a powerful Category 4 storm just hours away from making landfall. At the time this image was taken, the eye of the storm was about 55 miles (90 kilometers) south, southeast of Pensacola, Florida, and the storm was moving northwest at about 18 miles per hour (29 kph). The size of the storm put clouds of rain over most of the southeastern United States well before the storm came ashore. In this image, Dennis covers all of Florida, Alabama, Mississippi, and stretches over parts of Louisiana. The northern fringes of the storm appear to be over Tennessee and North Carolina. Credit: NASA

Sea surface temperatures (SST) in the tropical Atlantic and Gulf of Mexico easily surpassed the "hurricane threshold" beginning in July 2005 and continued to climb into the mid- to high 80's through August. These sea surface temperatures are 1 to 3 degrees F above normal. "Hurricane-wise, we are in an incendiary situation," said Bill Patzert, oceanographer at NASA's Jet Propulsion Laboratory, Pasadena, Calif. "These toasty SSTs are high octane fuel for September's hurricanes." September is usually the busiest month for Atlantic hurricanes.

Air temperature and humidity are also important factors. The Atmospheric Infrared Sounder (AIRS) experiment suite aboard the Aqua satellite obtains measurements of global temperature and humidity throughout the atmosphere. This may lead to improve weather forecasts, improved determination of cyclone intensity, location and tracks, and the severe weather associated with storms, such as damaging winds. 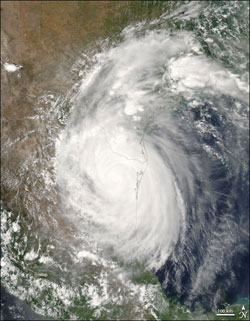 Image to right: The Tropical Rainfall Measuring Mission (TRMM) satellite captured this remarkable image of a rejuvenated Hurricane Emily in the western Gulf of Mexico. The image was taken at 17:36 UTC (1:36 pm EDT) on 19 July 2005 as Emily was bearing down on the northern coast of Mexico. The image shows a top-down perspective of the rain intensity within Emily as obtained from TRMM's sensors. Rain rates in the center of the swath are from the TRMM Precipitation Radar (PR), a radar that can measure precipitation from space. Rain rates in the outer swath are from the TRMM Microwave Imager (TMI). The eye of Emily is clearly visible in the center of the storm as a red semicircle indicating heavy rain intensities. At the time of this image, Emily was classified as a strong Category 1 hurricane with maximum sustained winds reported at 95 mph by the National Hurricane Center. The storm was moving west-northwest at 14 mph and was located 210 miles southeast of Brownsville, Texas. Credit: NASA

The TRMM satellite's Precipitation Radar (PR) instrument provided by Japan for the TRMM satellite provides CAT scan-like views of rainfall in the massive thunderstorms of hurricanes. TRMM instruments look at rainfall intensity for the likelihood of storm development. TRMM also sees "hot towers" or vertical columns of rapidly rising air that indicate very strong thunderstorms. These towers are like powerful pistons that convert energy from water vapor into a powerful wind and rain-producing engine. Once a storm develops, TRMM provides an inside view of how organized and tightly spiraled rain bands are, key indicators of storm intensity.

The TRMM PR got a good workout with Tropical Storms Cindy and Dennis as they both formed in early July, and both packed heavy rains.

After Cindy formed on July 3 in the extreme western Caribbean Sea just east of the Yucatan-Belize border. After crossing the Yucatan peninsula and re-entering the Gulf, she became a tropical storm on July 5. She moved northward, making landfall near Grand Isle, La. Just under hurricane strength. She brought heavy rains and inland flooding as she moved northeastward across the eastern U.S. 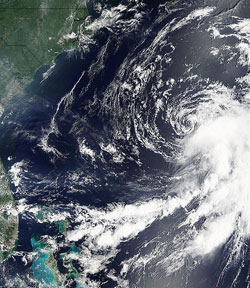 Image to left: This image of Tropical Storm Franklin was captured on July 25th, 2005 by the Moderate Imaging Spectroradiometer instrument on NASA's Terra satellite. At 11 a.m. on 7/25, the center of Tropical Storm Franklin was located near latitude 31.1 north, longitude 69.6 west, or about 295 miles west-southwest of Bermuda. Franklin was moving toward the east-northeast near 5 miles per hour, and was expected to continue with a gradual turn toward the northeast and away from the U.S. mainland. Maximum sustained winds were near 40 mph at the time of this image. Credit: NASA

After Cindy formed on July 3 in the extreme western Caribbean Sea just east of the Yucatan-Belize border. After crossing the Yucatan peninsula and re-entering the Gulf, she became a tropical storm on July 5. She moved northward, making landfall near Grand Isle, La. Just under hurricane strength. She brought heavy rains and inland flooding as she moved northeastward across the eastern U.S.

Tropical Depression Dennis formed on July 4 near the southern Windward Islands and moved west-northwestward across the Caribbean Sea. When he became a tropical storm on July 5, it was the earliest date on record for a fourth named storm. On July 8, just south of central Cuba, Dennis became the earliest category 4 hurricane on record with 150 mph winds. Dennis made landfall along the south-central coast of Cuba with 145 mph winds, causing considerable damage, widespread utility and communications outages.

Dennis weakened to a category 2 storm before making landfall along the western Florida panhandle near Navarre Beach late July 10. Considerable storm surge related damage occurred near St. Marks Florida, well east of the landfall location. Heavy rainfall and flooding occurred across much of Florida and extended well inland over portions of the southeastern U.S. at least thirty-two deaths were reported with most occurring in the Caribbean region. 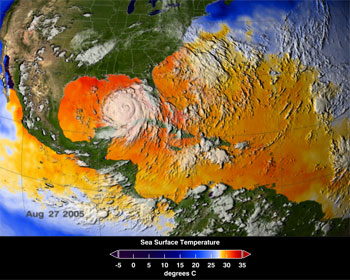 Image above: Warm ocean waters fuel hurricanes, and there was plenty of warm water for Katrina to build up strength once she crossed over Florida and moved into the Gulf of Mexico. This image depicts a 3-day average of actual sea surface temperatures (SSTs) for the Caribbean Sea and the Atlantic Ocean, from August 25-27, 2005. Every area in yellow, orange or red represents 82 degrees Fahrenheit or above. A hurricane needs SSTs at 82 degrees or warmer to strengthen. The data came from the Advanced Microwave Scanning Radiometer (AMSR-E) instrument on NASA's Aqua satellite. Click on image above to view an animation which depicts the sea surface temperatures for the period June 9 through August 9, 2005. Also note the different tracks of Hurricanes Dennis, Emily, and at the very end Katrina. Credit: NASA/SVS

Emily formed July 11, 1300 miles east-southeast of the Lesser Antilles. She moved west, and became a tropical storm on the 12. In two days she was a major hurricane (just below a category 5) with winds of 155 mph, south of Hispanola. On July 18, Emily struck Cozumel and crossed Mexico's Yucatan Peninsula with 135 mph winds. After a brief regeneration in the Gulf of Mexico, she made final landfall with winds near 125 mph in northeastern Mexico.

On July 21, Franklin grew from a depression to a tropical storm near the central Bahamas. His peak winds of 70 mph occurred on July 23, as he turned north and northeast in the Atlantic. Franklin merged with a frontal zone while passing south of Newfoundland, Canada on July 31.

Tropical Storm Gert set the month's record, forming in the Bay of Campeche on July 23. Late on July 24, Gert made landfall with 45 mph winds near Cabo Rojo on Mexico's east coast. She brought locally heavy rainfall to those areas that had been affected by Hurricane Emily less than a week earlier. Gert dissipated well inland over central Mexico on July 26.