Hurricane Multimedia Gallery
From hot towers to phytoplankton blooms, NASA’s cutting-edge hurricane research has been revealing never-before-seen aspects of these giant storms for over a decade. The past three years have seen great progress in the areas of intensity monitoring and 3-D modeling of hurricanes. In 2006, scientists at NASA and other institutions have more tools than ever to study these storms using the very latest in ground, air, and space-based technology. 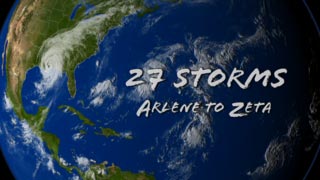