Why and How NASA Investigates Hurricanes
Why: Why is NASA involved in hurricane research? 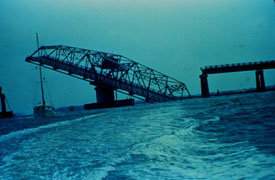 Image to right: A bridge is devastated during Hurricane Hugo. Click on image to enlarge. Credit: NOAA

NASA has a history of developing state-of-the-art remote sensors treating all aspects of weather and climate. There is a long legacy, a heritage, in observing the atmosphere from space; NASA launched the very first weather satellite back in 1960 (TIROS-1); for the first time, hurricane threats to the U.S. could be seen approaching from across the Atlantic.

1) How are global precipitation, evaporation and the cycling of water changing?
2) How well can weather forecast duration and reliability be improved by new space-based observations, data assimilation and modeling?
How: How Does NASA Do It? 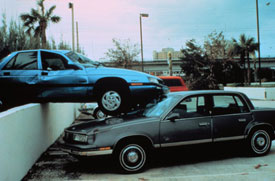 Image to left: Cars are thrown about like toys in the winds that accompany hurricanes. This photo is from Hurricane Andrew. Click on image to enlarge. Credit: NOAA

NASA remote sensors and satellites have been used to study hurricanes for years. One of the most fascinating aspects to NASA's new technology is that the latest generation of NASA sensors can see processes occurring below the clouds. Some of the satellites being used for hurricane research include:

TRMM (The Tropical Rainfall Measuring Mission satellite): TRMM can observe the vertical structure of rain and how intense the rain is falling from the clouds.
QuickSCAT: This "Scatterometer" instrument can help us visualize the circular movement of the winds that form a tropical cyclone as they occur above the sea surface. It can also tell the strength of winds in the tropical cyclone's core.
AMSR-E (Advanced Microwave Scanning Radiometer - Earth Observing System): This instrument on the Aqua satellite looks through the clouds to the ocean surface, and provides scientists with sea surface temperature. That temperature is important because it determines how strong the storm is, and whether it's going to get stronger or weaker, as hurricanes feed off warm waters.
AIRS (Atmospheric Infrared Sounder): The Aqua satellite's AIRS instrument provides vertical profiles of temperature and moisture, called soundings, with much greater coverage than weather balloons. This is critical for understanding the structure of the tropical atmosphere over vast oceans and inaccessible areas of land, such as rain forests and deserts. 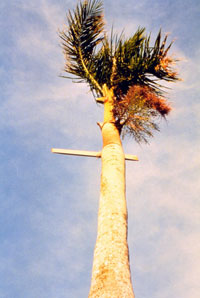 Image to right: A large wooden plank is impaled through a palm tree during the high winds of Hurricane Andrew. Click on image to enlarge Credit: NOAA

(2) Field Experiments. Several kinds of experiments are conducted in the field. The Convection and Moisture Experiment (CAMEX) was primarily designed to validate satellite measurements of moisture and to create a better understanding of the water cycle, but also places an emphasis upon studies of tropical cyclones. The Tropical Cloud Systems and Processes (TCSP) Experiment, a follow-up to CAMEX is slated for the summer of 2005 in Costa Rica. The National Oceanic and Atmospheric Administration's Hurricane Research Division will join NASA in this field mission.

NASA also uses aircraft such as the ER-2, which acts as a virtual satellite and test-bed for many of NASA's satellite remote sensing instruments. Two remote sensors are the EDOP (ER-2 Doppler Radar) and AMPR (Advanced Microwave Precipitation Radiometer) - two instruments that provide detailed vertical information on vertical precipitation and cloud structure, air motions within the storm, and very useful for validating TRMM. 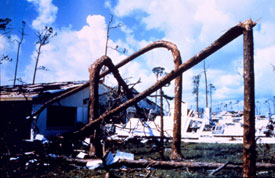 (3) State of the Art Computer Models. The computer models NASA uses include observations from NASA's remote sensors and satellites, and in turn can be used to better specify what the sensors should measure. Some examples of computer models include: the finite-volume General Circulation Model (fvGCM), the Atmospheric General Circulation Model (AGCM) and Mesoscale Model 5 (MM5) hurricane simulations, and Project Columbia, which is an advancement in NASA's supercomputing capability through deployment of an integrated computing, visualization and data storage environment.