Taiwan Takes Direct Hit From Typhoon Haitang
Taiwan suffered a direct hit from Typhoon Haitang on the afternoon of Monday July 18, 2005 local time with sustained winds reported at 184 kph (114 mph) by the Taiwan Central Weather Bureau. The storm cut directly across the north central part of the island and after crossing the Formosa Straight is expected to make landfall again on the southeast coast of China. 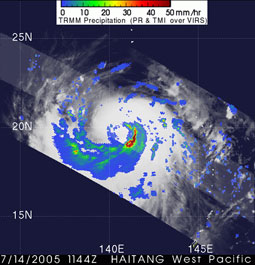 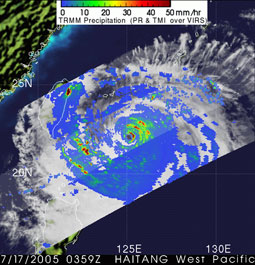 Image above: For information on the TRMM images above, read the next paragraph. Click on each image to enlarge. Credit: NASA

Launched in 1997, the Tropical Rainfall Measuring Mission (TRMM) satellite has served as a valuable platform for monitoring tropical cyclones, especially over remote parts of the ocean. These images of Haitang were captured by TRMM as it journeyed across the western Pacific headed for Taiwan. The first image was taken at 11:47 UTC on 14 July 2005 when Haitang was in the eastern Philippine Sea west of the Northern Mariana Islands. Near the time of this image, Haitang was a Category 2 typhoon with maximum sustained winds estimated at 85 knots (98 mph) by the Joint Typhoon Warning Center. The image shows the horizontal distribution of rain intensity looking down on the storm. Rain rates in the center of the swath are from the TRMM Precipitation Radar (PR), while those in the outer portion are from the TRMM Microwave Imager (TMI). The rain rates are overlaid on infrared (IR) data from the TRMM Visible Infrared Scanner (VIRS). TRMM shows that Haitang has a large eye with an eyewall that is still not yet completely formed northwest of the center. The rainfall pattern is also still asymmetric with heavy rain (red areas) just east of the center and a broader area of moderate (green areas) to light (blues) rain south of the center.

The next image shows a very different looking storm at 03:59 UTC on the 17th of July as it approaches Taiwan. The PR shows a small, well-defined eye surrounded by tight concentric bands of moderate (green) to heavy (red) rain, especially to the northeast of the center. The overall rain pattern is much more symmetric than in the previous image. These features are indicative of a mature intense cyclone. At the time of this image, Haitang's sustained winds were estimated to be 140 knots (161 mph) by Joint Typhoon Warning Center, making it a Category 5 super typhoon.