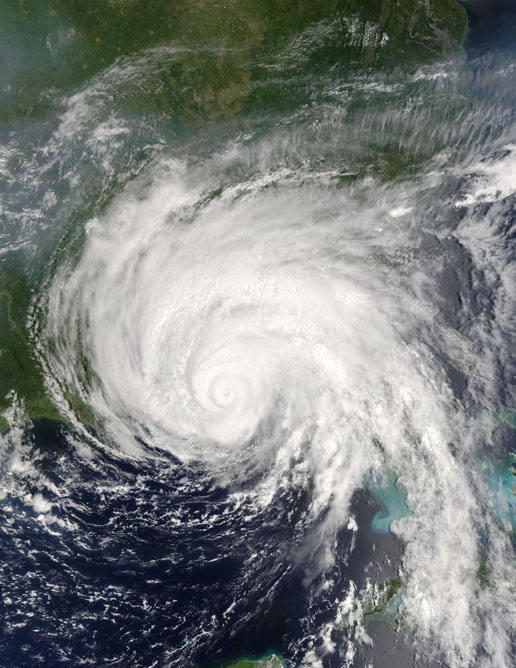 Image Above: Hurricane Dennis was bearing down on the Gulf Coast of the United States on July 10, 2005, at 12:15 p.m. (16:15 UTC) when the Moderate Resolution Imaging Spectroradiometer on NASA’s Terra satellite captured this image. With winds of 135 miles per hour (217 kph), Dennis was a powerful Category 4 storm just hours away from making landfall. At the time this image was taken, the eye of the storm was about 55 miles (90 kilometers) south, southeast of Pensacola, Florida, and the storm was moving northwest at about 18 miles per hour (29 kph).

The size of the storm put clouds of rain over most of the southeastern United States well before the storm came ashore. In this image, Dennis covers all of Florida, Alabama, Mississippi, and stretches over parts of Louisiana. The northern fringes of the storm appear to be over Tennessee and North Carolina. Click here to view a high resultion image. 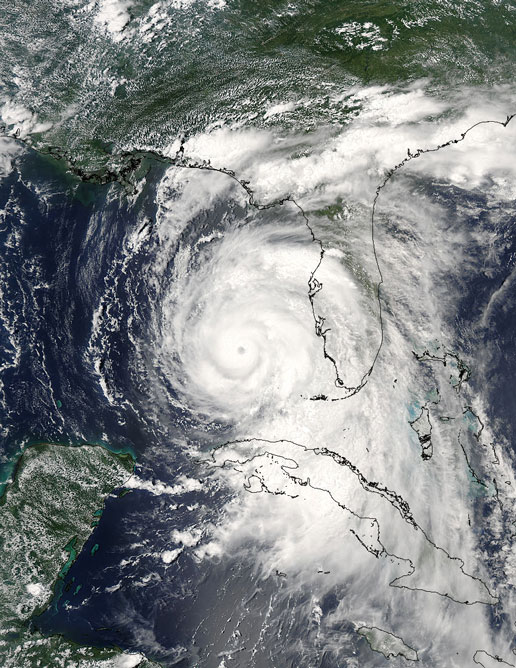 Image Above:More than a million are evacuating the coastal areas of Florida and Alabama as Hurricane Dennis steadily approaches. The first hurricane of the 2005 Atlantic hurricane season, Dennis has already been a deadly storm. It crossed over Cuba on July 8 and 9, leaving at least 10 dead, and caused additional deaths in Haiti. After re-emerging over open water, Dennis re-strengthened into a dangerous Category 3 hurricane with winds approaching 115 miles per hour when this image was taken at 2:45 p.m. EDT on July 9, 2005.

The Moderate Resolution Imaging Spectroradiometer on NASA’s Aqua satellite captured this image of the storm sliding up Florida’s west coast. The National Hurricane Center warns that Dennis continues to strengthen and may become a powerful Category 4 hurricane before making landfall over the northern Gulf Coast on July 10. Click here to view a high resolution image. 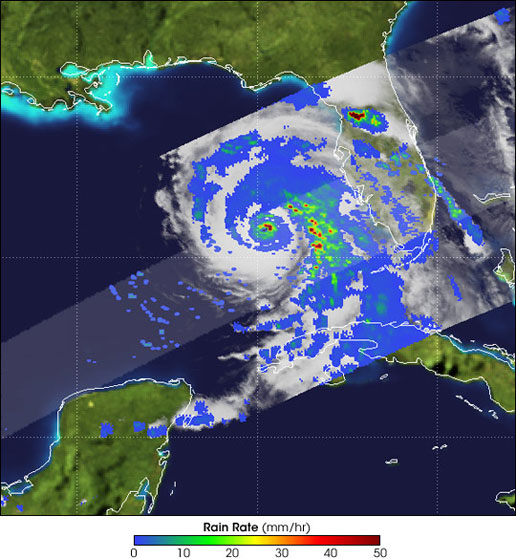 Image Above: This image shows Hurricane Dennis at 21:59 UTC (5:59 pm EDT) on July 9, 2005. The image shows the pattern of horizontal rain intensity obtained from TRMM's sensors. Rain rates in the center of the swath are from the TRMM Precipitation Radar (PR), the only radar measuring precipitation from space. Rain rates in the outer swath are from the TRMM Microwave Imager (TMI). The rain rates are overlaid on infrared (IR) data from the TRMM Visible Infrared Scanner (VIRS). This image shows a rejuvenated Dennis with maximum sustained winds back up to 90 knots (104 mph). The eye is well formed and contains intense 2-inch-per-hour rain rates (dark red area) in the northeastern part of the eyewall, an indication that strong heating is occurring in the core and is reinvigorating the system. For more on TRMM and its contribution to hurricane hunting click this link. TRMM is a joint mission between NASA and the Japanese space agency JAXA. + High resolution image Credit: NASA 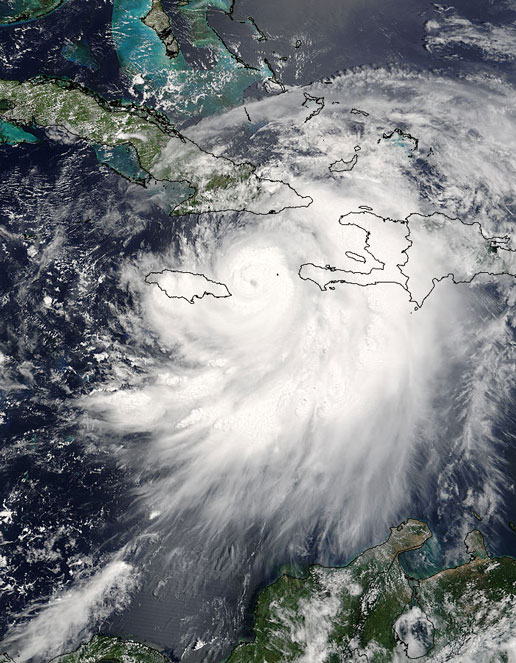 Image Above: Hurricane Dennis threaded its way between Jamaica and Haiti on a direct course for Cuba on July 7, 2005. The storm now has the distinctive hurricane form, with a well-defined eye surrounded by bands of swirling clouds. At 10:50 a.m. local time (15:50 UTC), when the Moderate Resolution Imaging Spectroradiometer (MODIS) on NASA’s Terra satellite took this image, Dennis was just below a Category 3 hurricane, with winds of 175 kilometers per hour (110 miles per hour) and stronger gusts. Less than an hour before this image was taken, the storm’s small dark eye was about 105 kilometers (65 miles) northeast of Kingston, Jamaica and 170 kilometers (105 miles) south-southeast of Guantanamo, Cuba. The National Hurricane Center reports that Dennis is traveling northwest at about 24 kilometers per hour (15 mph).

A storm of this size is a threat not just because of its powerful winds: Dennis is expected to produce heavy rain and coastal and inland flooding. Five to ten inches of rain may fall over Haiti, the Dominican Republic, Jamaica, Cuba, and the Cayman Islands, with as much as 15 inches falling in parts of Jamaica. Heavy rainfall can trigger flash floods and mudslide in mountainous regions. The storm will probably also raise tide levels by five to seven feet and generate large and dangerous waves.

Dennis is expected to strengthen as it moves north towards the Gulf Coast of the United States. For official storm warnings and additional information, please visit the National Hurricane Center. Click here to view a high resolution image. 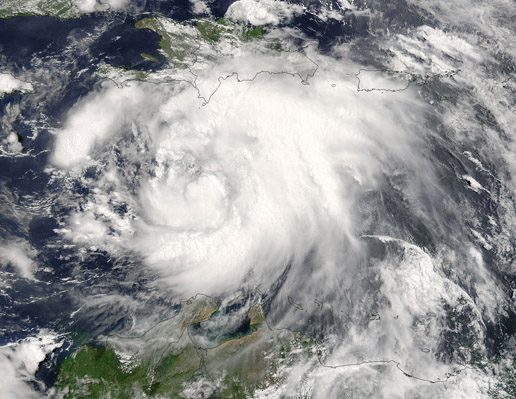 Image Above:Tropical Storm Dennis The swirling clouds of Tropical Storm Dennis span from the northern tip of Venezuela to the southern half of the island of Hispaniola in this Moderate Resolution Imaging Spectroradiometer (MODIS) image. NASA’s Terra satellite captured this image on July 6, 2005, at 10:05 a.m. local time (15:05 UTC) when Dennis was building to winds of 110 kilometers per hour (70 mph). The storm is moving northeast across the Caribbean and should pass between the eastern arm of Haiti and Jamaica, hammering both with four to eight inches of rain. The National Hurricane Center predicts that Dennis may become a major hurricane—Category 3 or higher—by July 8. Click Here to view a high resolution image.