New Orleans and Gulf Coast Flooding in the Aftermath of Katrina 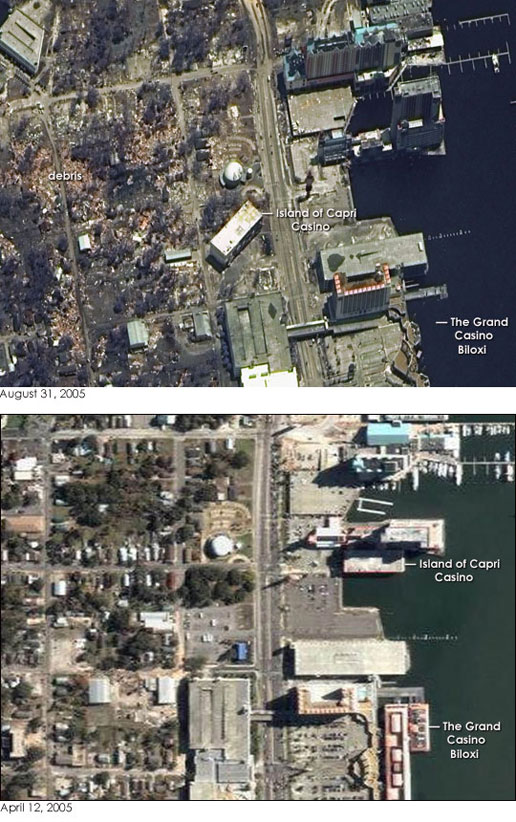 Biloxi, Mississippi was one of the communities hardest hit when Hurricane Katrina came ashore on August 29, 2005. Large sections of this seaside city were almost entirely flattened in the storm’s powerful surge. The top QuickBird image, taken on August 31, shows extensive damage in the blocks nearest the shore. Within two city blocks, two floating casinos—the Island of Capri Casino and the Grand Casino Biloxi—have disappeared. The Island of Capri Casino has been carried inland and now sits in the parking lot that was across the street. It is one of the few buildings that retains its structure. All of the houses in the region are gone, replaced by a broad field of debris. In the large image, the Biloxi Ocean Springs Bridge has been washed away, leaving only the pylons that once supported it.

The lower image shows the community on April 12, 2005. The satellite was nearly directly overhead when this image was taken, providing a slightly different perspective than the August 31 image, in which the city is viewed from an angle. The difference is most notable in the high-rise buildings, the sides of which are visible in the top image, but not visible in the lower image. The top image is also slightly rotated in comparison the lower image, so that streets run on an angle instead of perpendicular to the lower edge of the image. Credit: Images copyright Digital Globe . 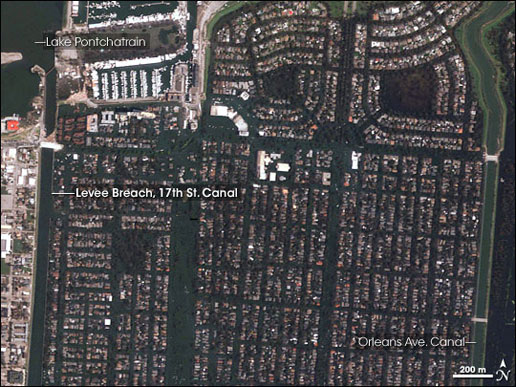 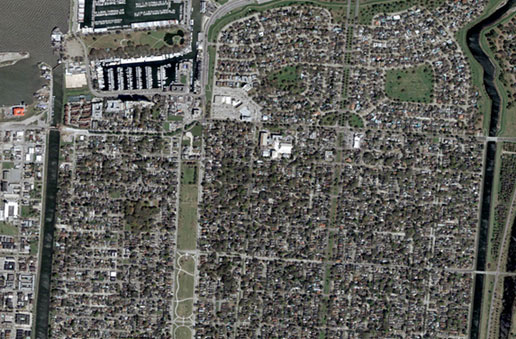 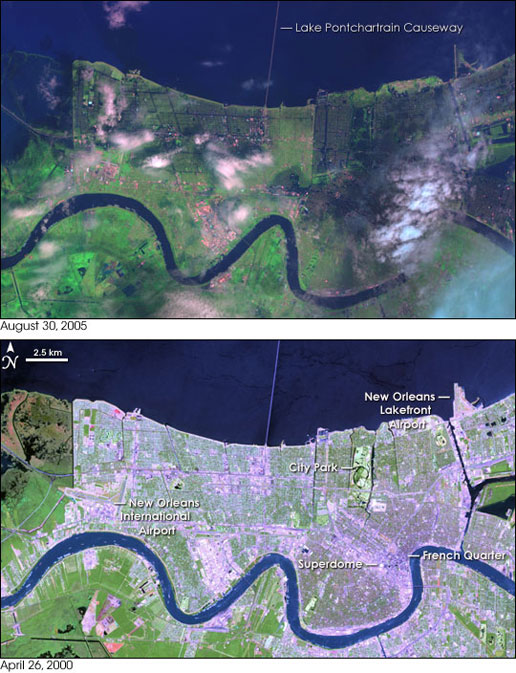 Although the Mississippi River undulates across the bottom of these images virtually unchanged, big changes are visible within the city of New Orleans on August 30, 2005 (top image), compared to April 26, 2000 (bottom.). In 2000, the urban landscape appears in lavender (developed areas) and pale green (springtime vegetation). The city neatly separates the blue ribbon of the Mississippi from Lake Pontchartrain to the north, although several narrow canals are visible as straight blue lines, such as the ones surrounding City Park. In the wake of Katrina, standing water creates a blue, bruised appearance to large sections of the city, especially the eastern part.

New Orleans sits in a low-lying area between Lake Pontchartrain to the north and the Mississippi River to the south. When storm surge and heavy rainfall from Hurricane Katrina weakened some levees—hills of earth that line the lake shores, the river, and canal banks—gravity took its course. Water was still flowing from Pontchartrain into New Orleans as of August 31, and many houses were swamped up to their rooftops. Among the locations being slowly inundated are the Superdome, where tens of thousands of refugees are staying, and the French Quarter, which was thought to be one of least flood-prone areas of the city. As the waters build, the risk of people coming into contact with chemical- or sewage-contaminated water increases rapidly. + Click for high resolution images Credit: NASA image by Jesse Allen using data provided by USGS Center for EROS and the Landsat Project Science Office at Goddard Space Flight Center. 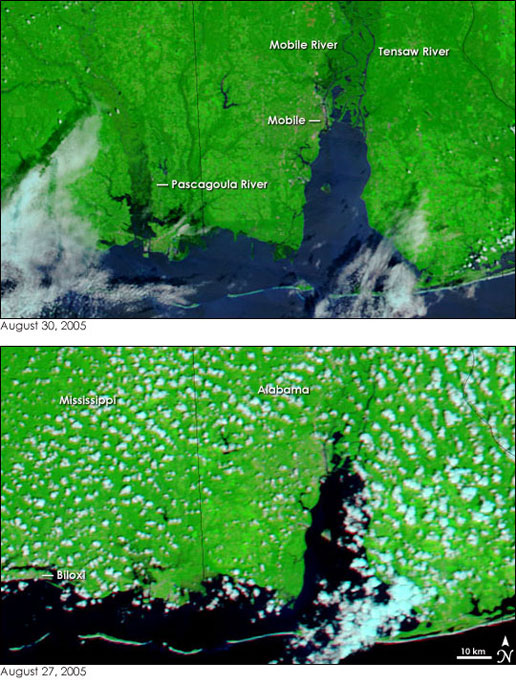 Hurricane Katrina sent water barreling into Mississippi and Alabama when it moved ashore on August 29, 2005. The powerful storm surge combined with heavy rains to cause widespread flooding along the Gulf Coast. The top image, acquired by the Moderate Resolution Imaging Spectroradiometer (MODIS) on NASA’s Terra satellite on August 30, 2005, shows flooding in all of the rivers flowing into the Gulf. In these false color images, water is black and dark blue, vegetation is green, and clouds are pale blue and white. The flooded rivers make the land along their banks dark green.

The most severe flooding is at the mouth of the Pascagoula River in Mississippi, where the river mouth now resembles a wide bay. The river itself was too small to be visible against an even field of green on August 27, lower image. Three days later, it cut a wide track across the top of the “bay.” Flooding is also evident along the Mobile and Tensaw Rivers, which flow into Mobile Bay from the north. According to news reports, the region’s most devastating flooding occurred in Biloxi, Mississippi. Unfortunately, a cloud sits over the coastal city, blocking it from view. + Click for high resolution images Credit: NASA/Jeff Schmaltz, MODIS Land Rapid Response Team at NASA GSFC