Greenland Ice Loss Doubles in Past Decade, Raising Sea Level Faster
The loss of ice from Greenland doubled between 1996 and 2005, as its glaciers flowed faster into the ocean in response to a generally warmer climate, according to a NASA/University of Kansas study.

The study will be published tomorrow in the journal Science. It concludes the changes to Greenland's glaciers in the past decade are widespread, large and sustained over time. They are progressively affecting the entire ice sheet and increasing its contribution to global sea level rise. 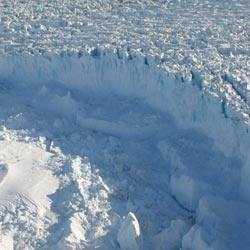 Image right: This image shows the calving front, or break-off point into the ocean, of Helheim Glacier, located in southeast Greenland. The image, taken in May 2005, shows high calving activity associated with faster glacial flow. This glacier is now one of the fastest moving glaciers in the world. Image credit: NASA/Wallops
+ Browse version of image

Researchers Eric Rignot of NASA's Jet Propulsion Laboratory, Pasadena, Calif., and Pannir Kanagaratnam of the University of Kansas Center for Remote Sensing of Ice Sheets, Lawrence, used data from Canadian and European satellites. They conducted a nearly comprehensive survey of Greenland glacial ice discharge rates at different times during the past 10 years.

"The Greenland ice sheet's contribution to sea level is an issue of considerable societal and scientific importance," Rignot said. "These findings call into question predictions of the future of Greenland in a warmer climate from computer models that do not include variations in glacier flow as a component of change. Actual changes will likely be much larger than predicted by these models."

The evolution of Greenland's ice sheet is being driven by several factors. These include accumulation of snow in its interior, which adds mass and lowers sea level; melting of ice along its edges, which decreases mass and raises sea level; and the flow of ice into the sea from outlet glaciers along its edges, which also decreases mass and raises sea level. This study focuses on the least well known component of change, which is glacial ice flow. Its results are combined with estimates of changes in snow accumulation and ice melt from an independent study to determine the total change in mass of the Greenland ice sheet.

Rignot said this study offers a comprehensive assessment of the role of enhanced glacier flow, whereas prior studies of this nature had significant coverage gaps. Estimates of mass loss from areas without coverage relied upon models that assumed no change in ice flow rates over time. The researchers theorized if glacier acceleration is an important factor in the evolution of the Greenland ice sheet, its contribution to sea level rise was being underestimated.

To test this theory, the scientists measured ice velocity with interferometric synthetic-aperture radar data collected by the European Space Agency's Earth Remote Sensing Satellites 1 and 2 in 1996; the Canadian Space Agency's Radarsat-1 in 2000 and 2005; and the European Space Agency's Envisat Advanced Synthetic Aperture Radar in 2005. They combined the ice velocity data with ice sheet thickness data from airborne measurements made between 1997 and 2005, covering almost Greenland's entire coast, to calculate the volumes of ice transported to the ocean by glaciers and how these volumes changed over time. The glaciers surveyed by those satellite and airborne instrument data drain a sector encompassing nearly 1.2 million square kilometers (463,000 square miles), or 75 percent of the Greenland ice sheet total area.

Glacier acceleration has been the dominant mode of mass loss of the ice sheet in the last decade. From 1996 to 2000, the largest acceleration and mass loss came from southeast Greenland. From 2000 to 2005, the trend extended to include central east and west Greenland.

"In the future, as warming around Greenland progresses further north, we expect additional losses from northwest Greenland glaciers, which will then increase Greenland's contribution to sea level rise," Rignot said.

For University of Kansas Center for Remote Sensing of Ice Sheets information, visit: