Airplane Monitors Great Lakes Algae
A rare bird has been flying over the Great Lakes recently, and it isn't migrating or searching for prey. 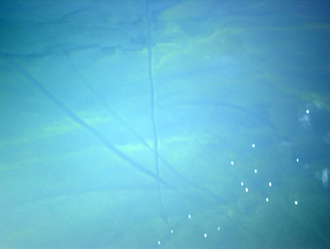 This hawkeyed species is a Learjet aircraft outfitted with an advanced imaging system. Engineers at NASA's Glenn Research Center in Cleveland modified the plane to help the National Oceanic and Atmospheric Administration (NOAA) monitor algae in western Lake Erie and Lake Huron's Saginaw Bay. The Glenn team began its latest round of flights in August.

The plane's new imaging system incorporates instruments originally designed by Glenn engineers to study dust on Mars with a high-resolution scientific camera called a hyperspectral imager. It is allowing scientists to study incredibly detailed pictures of algal blooms in the lakes.

What's so interesting about algae?

Most algae are harmless and even important to the health of the ecosystem. But when algae grow rapidly enough to form blooms that float on the water or wash ashore, they can be a nuisance. The blooms may, for example, lead to smelly, foul-tasting drinking water and unpleasant swimming conditions. What's worse, some algal blooms produce toxins that can make humans and other animals sick.

Algal blooms vexed swimmers and skiers in the Great Lakes throughout the 1960s, until the federal government limited the use of phosphorus in detergents and fertilizers. Over the past decade, however, Microcystis, a type of blue-green algae known to produce the toxin microcystin, has returned to the Great Lakes. No single cause has been pinpointed, but runoff from cities, fertilizers, septic tank overflow, zebra mussels, and livestock near water supplies are likely culprits.

This concerns government and business leaders because the Great Lakes provide drinking water to 40 million people and have more than 500 recreational beaches. The lakes also generate approximately $4 billion in commercial and sport fishing business, according to NOAA.

Although municipal water plants filter the toxins and no illnesses have been reported, scientists at NOAA's Center of Excellence for Great Lakes and Human Health are researching and developing technology to detect and predict the blooms.

Eyes in the Sky

For years, the Michigan laboratory's researchers have been measuring microcystin levels in western Lake Erie and Saginaw Bay by collecting samples of the blue-green algae. When toxin levels exceed the World Health Organization's recommended limit, they notify local health departments.

But the area's vastness makes finding the blooms by boat difficult and time consuming. To solve this problem, the laboratory has been working with NASA to develop techniques for distinguishing harmful algae from other types of algae using satellite and aerial images.

In a 2000 study funded by NASA Glenn, scientists from the University of Toledo and Bowling Green State University in Ohio were able to identify blue-green algae using satellite images. The data collected from NASA's Terra and Aqua satellites matched toxin concentrations in the water samples. Since then, NOAA has also used the Landsat TM Earth-observing satellite, which is equipped with a stronger imaging system, to monitor the blooms. 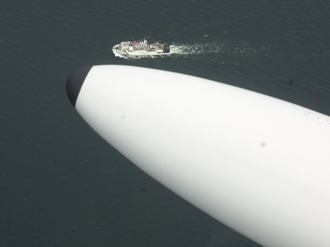 While satellites are the best way to observe a large area, they do have some limitations. "Landsat passes over the lakes once every eight days," said John Lekki, an optical systems research engineer at Glenn. "If the sky is cloudy, it might not capture a clear image."

Image left: In this snapshot taken from the window of a Learjet, NOAA's boat collects algae samples from the water. Credit: NASA

Aerial monitoring complements satellite monitoring by allowing researchers to take to the skies quickly when conditions are right. "In an airplane, we can pass over a bloom hourly and fly under clouds," Lekki added. "Since we're flying at a lower altitude, we can capture higher resolution images, too."

Aerial monitoring also produces quick results, enabling researchers to take water samples immediately after the air crew spots a suspicious bloom. "We are basically NOAA's eye in the sky," Lekki said. "It's difficult to cover these large areas with a boat, so we make their lives easier by letting them know where we have spotted blooms. Then, they can take their boats directly to the algae and collect water samples."

Glenn first monitored the Great Lakes with its T-34 aircraft late last summer and early last fall. Lekki and a team of engineers modified both planes by adding a state-of-the-art imaging system, which includes the hyperspectral imager.

"Hyperspectral imaging is the gold standard," Lekki said. "The level of detail it provides is unmatched." 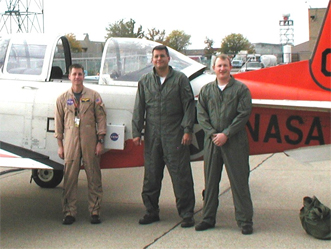 Designed by Glenn engineers, this hyperspectral imager can cut one picture into 250 color-specific images, covering the spectrum from ultraviolet to infrared. Each image shows a unique characteristic, not discernable to the human eye. Therefore, each substance in the lake has a different spectroscopic signature, much like every person has a different fingerprint.

NOAA is analyzing the data from the imaging system and comparing it to measurements taken from the water samples and satellites. The goal? To eventually make remote monitoring so accurate that it can be used to predict harmful algal blooms and give early warning to municipal water plants, beaches, boaters, skiers or anyone planning a day on the Great Lakes.

"It is always nice when our work helps make things better here on Earth," Lekki said, "especially in our own back yard."