Gravity Measurements Help Melt Ice Mysteries
Greenland is cold and hot. It's a deep freezer storing 10 percent of Earth's ice and a subject of fevered debate. If something should melt all that ice, global sea level could rise as much as 7 meters (23 feet). Greenland and Antarctica - Earth's two biggest icehouses - are important indicators of climate change and a high priority for research, as highlighted by the newly inaugurated International Polar Year.

Just a few years ago, the world's climate scientists predicted that Greenland wouldn't have much impact at all on sea level in the coming decades. But recent measurements show that Greenland's ice cap is melting much faster than expected. 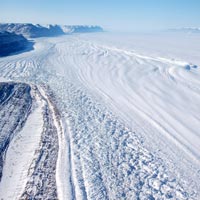 These new data come from the NASA/German Aerospace Center's Gravity Recovery and Climate Experiment (Grace). Launched in March 2002, the twin Grace satellites circle the globe using gravity to map changes in Earth's mass 500 kilometers (310 miles) below. They are providing a unique way to monitor and understand Earth's great ice sheets and glaciers.

Grace measurements have revealed that in just four years, from 2002 to 2006, Greenland lost between 150 and 250 cubic kilometers (36 to 60 cubic miles) of ice per year. One cubic kilometer is equal to about 264 billion gallons of water. That's enough melting ice to account for an increase in global sea level of as much as 0.5 millimeters (0.019 inches) per year, according to Isabella Velicogna and John Wahr of the University of Colorado, Boulder. They published their results in the scientific journal Nature last fall. Since global sea level has risen an average of three millimeters (0.1 inch) per year since 1993, Greenland's rapidly increasing contribution can't be overlooked.

"Before Grace, the change of Greenland's ice sheet was inferred by a combination of more regional radar and altimeter studies pieced together over many years, but Grace can measure changes in the weight of the ice directly and cover the entire ice sheet of Greenland every month," says Michael Watkins, Grace project scientist at NASA's Jet Propulsion Laboratory, Pasadena, Calif. However, as anyone who has ever been concerned about his or her weight knows, a number on a scale is just the beginning. In the five years that Grace has been flying, scientists have found ways to make the most of this new set of observations.

"Grace has a big footprint," says Watkins. "We can locate regions of greatest loss, but we can't see individual glaciers." However, Grace's spatial resolution is continually improving. In the most recent studies, he says, Grace has observed large ice losses in the southeast of Greenland, while other areas, such as the west coast, have shown losses as well. 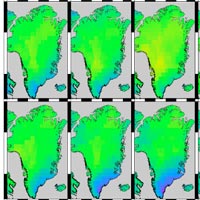 While Greenland is losing ice, it's also acquiring some new ice through precipitation. Scientists at NASA's Goddard Space Flight Center, Greenbelt, Md., used Grace to determine that ice losses far surpass ice gains. A new way of analyzing the data allowed them to get a picture of regional changes. While snow added 60 cubic kilometers (14 cubic miles) of ice mass to Greenland's interior each year between 2003 and 2005, the low-lying coast areas of Greenland lost nearly three times as much ice - 172 cubic kilometers (41 cubic miles) - each year during the same period.

To confirm just how much of the mass Grace detects in Greenland and Antarctica is due to snow and ice, scientists also have to determine the contributions from another source, Earth's changing crust. "When Grace sees a change in polar gravity," says Watkins, "part of it is today's ice melt and part is what is called post-glacial rebound."

"A long time ago during the last ice age, this region was pushed down by even more snow and ice, and now this mantle wants to come back, or rebound," explains Erik Ivins, a JPL Earth scientist and Grace science team member.

One way to look at the problem, says Ivins, is to imagine a bathtub filling up with water from a faucet but losing water from holes in the bottom of the tub. At the same time, the bathtub may be changing shape.

Ivins and his colleagues are refining the computer models used to understand and predict post-glacial rebound. It turns out that beneath the ice sheet covering Greenland, the mantle isn't changing the shape of the ?bathtub" very fast. "This tells us that the large mass changes Grace detects in the southeastern region of Greenland aren't due to post-glacial rebound," says Ivins.

As Grace celebrates its fifth birthday and begins its extended mission, "we're getting the picture into better focus," says Watkins, "and we're going to have a new wave of discoveries. Improving the post-glacial rebound model is going to help, especially in Antarctica, where post-glacial rebound has a big effect on the gravity signal. We're also going to be able to pinpoint areas of loss and better understand how the losses change from one particular year to the next. This will tell us more about the types and mechanisms of ice mass loss so we can make better predictions in the future."

While Grace provides a new and independent way to study Earth's ice sheets, it will take a combination of different tools, including laser altimeters, radar, and field studies, to sort out more clearly what's happening. "All technologies have different strengths and weaknesses," says Watkins. "Grace is the new piece. It shows us the big picture, while other measurements look at a smaller scale. We need to use them all together."

"We have to pay attention," Velicogna adds. "These ice sheets are changing much faster than we were expecting. Observations are the most powerful tool we have to know what is going on, especially when the changes - and what's causing them - are not obvious."