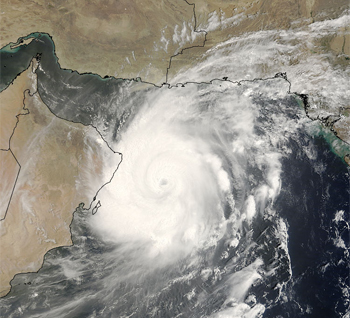 The formation of tropical cyclones in the Arabian Sea is rare, but as Tropical Cyclone Gonu is proving, just because these storms are rare doesn't mean that they can't be powerful.

This image of Cyclone Gonu, as it churned in the northern Indian Ocean basin, was captured on June 4, 2007 by the Moderate Resolution Imaging Spectroradiometer (MODIS) on NASA's Aqua satellite. Oman is to the left of the storm, and Iran and Pakistan are to its north.

By June 5, 2007, the intense storm had reached a dangerous Category 4 status, with sustained winds measuring 155 miles per hour, according to the University of Hawaii's Tropical Storm Information Center.

Gonu is the strongest storm to hit the Arabian Peninsula since record keeping began more than 60 years ago, according to news reports.