NASA Facilities Weather Ivan
Hurricane Ivan made landfall early Thursday near the Alabama-Florida border, doing significant damage to coastal communities in its path. NASA's Stennis Space Center in Mississippi and the Michoud Assembly Facility in New Orleans were west of the worst of the storm, and initial reports indicate there is little or no damage to those facilities. NASA's Marshall Space Flight Center in Huntsville, Ala., closed early Thursday as Ivan moved inland with high winds and rain. Initial reports there also indicate little or no damage.

Animation Above: NASA's Tropical Rainfall Measuring Mission (TRMM) satellite took this scan of Hurricane Ivan on September 15, 2004. Blue represents at least 0.25 inch of rain in 1 hour, green at least 0.5 inch in an hour, yellow at least 1 inch an hour, and red at least 2 inches an hour. Read more in NASA Turns Ivan Inside Out and Ivan's 'CAT' Scan. Credt:NASA

At Stennis, where Space Shuttle engines are tested before flight, workers were sent home Tuesday, Sept. 14 to prepare for the storm. A team of about 50 essential personnel rode out the storm, and hundreds of local residents also took shelter there. Two flight-qualified Space Shuttle Main Engines at Stennis were secured; one was put back into its container, and the other was wrapped in plastic. Two developmental engines were enclosed on their test stands and protected.

Michoud is a NASA facility operated by Lockheed-Martin which manufactures and assembles the large Space Shuttle external fuel tanks. Lockheed Martin and NASA workers were dismissed Tuesday, Sept. 14. to make preparations at home.

The shuttle fuel tanks at Michoud were secured. Equipment was moved indoors, facilities were sandbagged, and important materials -- such as insulating foam and adhesive -- were loaded onto trucks to be transported out of the area, if needed. 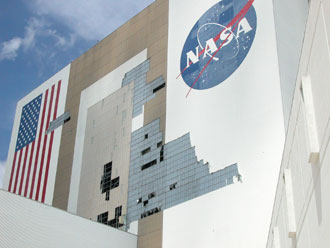 "We really saw our readiness for hurricanes Charley and Frances pay off," said William Readdy, NASA's associate administrator for space operations. "KSC was in the path of those two strong storms, and while some of our buildings were damaged, we made sure our workforce was safe and had no injuries. We were also able to protect our three Space Shuttles, our International Space Station components, and other key hardware."

During the closure, the KSC Damage Assessment and Recovery Team (DART) completed initial damage assessments. KSC weathered sustained winds greater than 70 mph and gusts as high as 94 mph. A thorough assessment of KSC's 900 facilities and buildings continues and could take weeks or months to complete.

Return to this page for the latest news updates and images from space.
› Back To Top