Saharan Dust Affects Thunderstorm Behavior in Florida
People that live in Florida would expect the sands from the state beaches to blow into the air, and usually don't think of the sands and dust from the Saharan Desert twirling around them. However, winds do carry the desert dust across the Atlantic Ocean, and scientists have been studying what they do to Florida Thunderstorms. 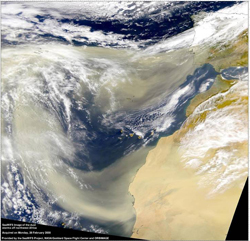 Image to right: Saharan Dust Blowing off Northwest Africa: This is an image of dust storms taken by NASA's SeaWiFS satellite, taken on Feb. 28, 2000. Click on image to enlarge. Credit: NASA

Scientists have discovered that these tiny particles of dust from the Saharan desert can affect thunderstorms in Florida in various ways. Dust affects the size of a thunderstorm's "anvil" or top, the strength and number of warm updrafts (rising air), and the amount of rain that builds up and falls from the "heat generated" or convective thunderstorms.

Findings on the "Impact of Saharan Dust on Florida Storm Characteristics" were presented at the 2005 annual meeting of the American Meteorological Society on Jan. 11 at the San Diego Convention Center in San Diego, Calif. 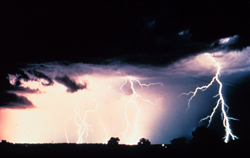 Working with her colleagues, van den Heever found that when Saharan dust is in the air, the thunderstorm anvils created by Florida's convective thunderstorms tend to be a little smaller in area, but they tend to be better organized and thicker. This affects the amount of incoming sunlight and warmth reaching the ground, which can have effects on long-term climate. Over time, more sunlight would warm temperatures, less sunlight would cool temperatures. 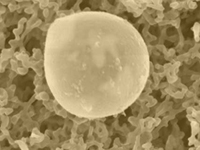 Image to right: A Microscopic Look at Dust: This particle of dust was magnified 12,000 times. Click on image to enlarge. Credit: USGS

The researchers also noticed that the updrafts of warm moist air, which build into thunderstorms, were stronger, and that there were more of these updrafts produced in the presence of the dust. These updrafts also carry tiny particles of pollution called aerosols up into all levels of the building thunderclouds.

Florida residents not only see more updrafts developing during dust events, but the dust affects the amount of rainfall that reaches the ground. Dust is an aerosol, and aerosols or little particles serve as the center or nuclei (called a cloud condensation nuclei) for cloud droplets to form around. These cloud droplets then combine to form raindrops which fall to the ground. As such, aerosols affect the production of rainfall. 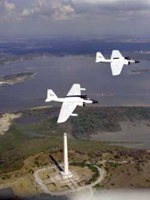 Image to left: NASA WB-57 Flies for Crystal-Face Mission: The NASA Johnson Space Center (JSC) in Houston, Texas is the home of the NASA WB-57 High Altitude Research Program. Two fully operational WB-57 aircraft are based near JSC at Ellington Field. Both aircraft have been flying research missions since the early 1960's, and continue to be an asset to the scientific community with professional, reliable, customer-oriented service designed to meet all scientific objectives. Credit: NASA

There are three types of nuclei that Saharan dust can be. They can act as the center or nuclei for water vapor as a CCN, GCCN (Giant Cloud Condensation Nuclei) and IN (Ice Nuclei), where ice forms around a dust particle center. Van den Heever used a computer model to see how the atmosphere and clouds react with Saharan dust and without the desert dust. She then compared the results and found something unusual. The dust increased the number of centers or nuclei for raindrops and decreased the amount of rainfall at the Earth’s surface.

Nuclei or centers for droplets in a cloud compete for a limited amount of water vapor and liquid water to form raindrops. When there are many particles that act as a center for water vapor, there is less water for each center, resulting in smaller cloud droplets. As such, it is less likely that raindrops will form when droplets combine. 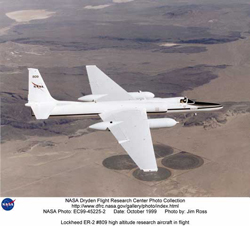 Image to right: NASA'S ER-2 Flying in the Crystal-Face Mission: The ER-2 is a civilian version of the Air Force's U2-S reconnaissance platform. These high-altitude aircraft are used as platforms for investigations that cannot be accomplished by sensor platforms of the private sector. Aircraft and spacecraft have proven to be excellent platforms for remote and in situ sensing. The ER-2, flying at the edge of space, can scan shorelines, measure water levels, help fight forest fires, profile the atmosphere, assess flood damage, and sample the stratosphere. Click on image to enlarge. Credit: NASA

The scientists also found that greater concentrations of Giant CCN (GCCN) as well as ice nuclei initially resulted in more rainfall reaching the surface. However, as the storms continued to develop, the two types of nuclei were removed from the storms by the precipitation and these nuclei then had less of an effect on the amount of rain reaching the surface. The scientists concluded that the overall effect of the Saharan dust on the surface rainfall was to reduce it.

The scientists used data from NASA's CRYSTAL-FACE (Cirrus Regional Study of Tropical Anvils and Cirrus Layers – Florida Area Cirrus Experiment) field campaign to examine the affects of increased numbers of nuclei from the dust and pollutants. The purpose of the CRYSTAL-FACE mission was to study cirrus clouds to improve forecasts of future climate change.

The scientists concluded that Saharan dust can have a major impact on the amount of rainfall produced by thunderstorms in Florida. Also, because dust affects the size and thickness of thunderstorm anvils, the changes affect the amount of sunlight reaching Earth and being reflected by the clouds, which have implications for a changing climate. Finally, this research can also help answer questions about how tiny particles called aerosols and other pollutants move around the world in the upper atmosphere.

For the extended Abstract of the AMS paper, please visit on the Internet:
Crystal Face AMS Paper Abstract