When Snow Melts, Ocean Plants Bloom
Who would have thought that melting snow cover in the Himalayan Mountains could alter the ocean food chain over a thousand miles away? Well, that's just what's happening, according to a NASA-funded study appearing in this week's Science magazine. 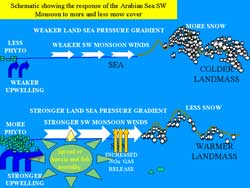 Image to right: A graphic shows how snowmelt affects phytoplankton blooms. Click on image to enlarge. Oxygen depleted waters also provide the perfect environment for the growth of bacteria that convert nitrate in seawater into forms of nitrogen that most plants can't use. One of the latter is nitrous oxide, also known as laughing gas. In the atmosphere, nitrous oxide is 310 times more potent as a greenhouse gas than carbon dioxide. Thus, as very large phytoplankton blooms deplete more oxygen from the water, the creation of nitrous oxide in the Arabian Sea could exacerbate climate change. Credit: Joaquim Goes, Bigleow Laboratory for Ocean Sciences

The study finds a decline in winter and spring snow cover over Southwest Asia and the Himalayan mountain range is creating the right conditions for more widespread blooms of ocean plants in the Arabian Sea.

The decrease in snow cover has led to greater differences in both temperature and pressure systems between the Indian subcontinent and the Arabian Sea. The pressure differences generate monsoon winds that mix the ocean water in the Western Arabian Sea. This mixing leads to better growing conditions for tiny, free-floating ocean plants called phytoplankton. Phytoplankton serve as the base of the ocean food chain.

Joaquim Goes, a senior researcher at the Bigelow Laboratory for Ocean Sciences in Maine is the study's lead author. He and colleagues used data from OrbImage and NASA's Sea-viewing Wide Field-of-view Sensor (SeaWiFS) satellite to show that phytoplankton concentrations in the Western Arabian Sea have increased by over 350 percent over the past 7 years.

"Climate change and warming are causing a decline in snow cover over the Eurasian region, especially over the Himalayas," said Goes. "The associated shifts in winds, and increased phytoplankton levels in the Arabian Sea, could have far reaching consequences for the ecosystem of the region." 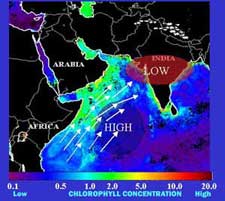 Image left -- Reversal of Monsoon Wind Direction (Jun-Sept): The temperature difference between the landmass and the ocean creates a low pressure system over the Indian subcontinent and a high pressure system over the Arabian Sea. This difference causes the winds to blow from the Southwest Arabian Sea, bringing rainfall from June to September each year. The color bar represents the concentration of chlorophyll, with blue being the smallest and red being the largest. Click on image to enlarge. Credit: Joaquim Goes, Bigelow Laboratory for Ocean Sciences

When winter and spring snow cover is low over Eurasia, more of the Sun's rays are absorbed by Earth, rather than getting reflected back out to space. As a result the land mass heats up more in summer creating a larger temperature difference between the water of the Arabian Sea and the Indian subcontinent landmass.

In the Western Arabian Sea these winds also cause upwelling of cooler nutrient-rich water, creating ideal conditions for phytoplankton to bloom every year during summer.

Image right: This graph depicts snow cover in Southwest Asia (SWA), and the Himalayas-Tibetan Plateau (HTP) between 1967 and 2003. The horizontal "zero" line represents the monthly average snow cover. Below that line indicates a drop, above represents an increase. The graph shows a decline in winter snow that has been particularly rapid over the past 6-7 years. Click on image to enlarge Credit: Joaquim Goes, Bigelow Laboratory for Ocean Sciences

Since 1997, a reduction in snow has led to wider temperature differences between the land and ocean during summer. As a consequence, sea surface winds over the Arabian Sea have strengthened leading to more intense upwelling and more widespread blooms of phytoplankton along the coasts of Somalia, Yemen and Oman.

According to Goes, while large blooms of phytoplankton can enhance fisheries, exceptionally large blooms could be detrimental to the ecosystem. Increases in phytoplankton amounts can lead to oxygen depletion in the water column and eventually to a decline in fish populations.