NASA Satellites See El Nino Creep in From the Indian Ocean
Scientists studied the winds and rains in the eastern Indian Ocean for hints at developing El Ninos. They used that information to create an "Index" or gauge that accurately predicted the El Nino of 2002-2003.

El Nino is signaled by a warming of the ocean surface off the western coast of South America that occurs every 4 to 12 years when cold, nutrient-rich water does not come up from the ocean bottom. It causes die-offs of plankton and fish and affects Pacific jet stream winds, altering storm tracks and creating unusual weather patterns in various parts of the world. 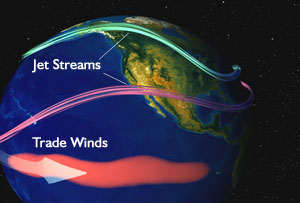 The researchers used the TRMM and QuikScat satellites to track wind, rainfall, and warmer sea surface temperatures moving from the Indian to the Pacific Ocean in early 2002, before the 2002-03 El Nino.

During the winter of 2001-2002, climate conditions in the eastern Indian Ocean changed dramatically. Westerly winds increased and the weather flip-flopped from dry to wet.

"This study expands on recent work linking rain and wind changes over the last 25 years to the development of El Ninos," Curtis said. The earlier study examined changes in rainfall from week to week, and the total amount of wintertime rainfall in key locations of the eastern Indian Ocean. They found these data points could be a sign of early shifts in climate leading to the development of El Ninos since 1979. The researchers then examined winds recreated by computer models, but did not find the same connections.

Curtis suggests that for the 1979-2002 period changes in rainfall in the eastern Indian Ocean are a better predictor for the onset of an El Nino than winds. Therefore, the El Nino Onset Index (EOI) was created using only rainfall data. 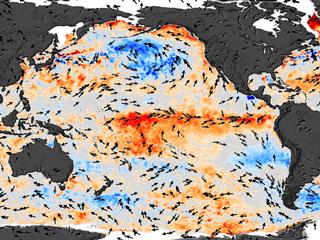 Image above: 2002-2003 El Nino's Warmer Waters and Wind Direction Sea surface temperatures and sea surface winds show the development of the 2002/2003 El Nino based on data from NASA's Aqua and QuikSCAT spacecraft. The red area that develops off the western coast of South America indicates El Nino's warm waters. The arrows represent the directions of the winds. Click image to see animation. Credit: NASA

The scientists noticed the first weather system from the eastern Indian Ocean followed the Equator and the second traveled further south closer to Australia. In the second example, warm waters appeared first, followed by heavy rainfall in the eastern Indian Ocean. Then, strong westerly winds and a cooling of the sea surface developed. These events moved through the ocean area between Indonesia and Australia, suggesting a connection between rising air, wind, and sea surface temperatures over a period of days. These studies provided a basis for how changes in the East Indian Ocean are linked to following events in the Pacific Ocean, including the start of El Nino events.

There is a weak El Nino underway, according to the National Oceanic and Atmospheric Administration, which the EOI did not predict. Curtis explained that the EOI may not be sensitive enough to register weak episodes. In addition, the current El Nino is not basin-wide, as the far eastern Pacific Ocean is cooler than normal.

In the future, NASA will launch the Global Precipitation Measurement Mission which will contribute to the EOI, as TRMM does currently.