Electric Hurricanes
The boom of thunder and crackle of lightning generally mean one thing: a storm is coming. Curiously, though, the biggest storms of all, hurricanes, are notoriously lacking in lightning. Hurricanes blow, they rain, they flood, but seldom do they crackle.

Surprise: During the record-setting hurricane season of 2005 three of the most powerful storms--Rita, Katrina, and Emily--did have lightning, lots of it. And researchers would like to know why.

Richard Blakeslee of the Global Hydrology and Climate Center (GHCC) in Huntsville, Alabama, was one of a team of scientists who explored Hurricane Emily using NASA's ER-2 aircraft, a research version of the famous U-2 spy plane. Flying high above the storm, they noted frequent lightning in the cylindrical wall of clouds surrounding the hurricane's eye. Both cloud-to-cloud and cloud-to-ground lightning were present, "a few flashes per minute," says Blakeslee. 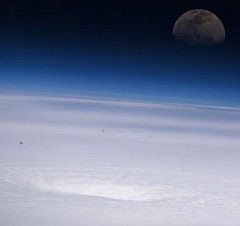 Image to right: The eye of Hurricane Emily photographed from the International Space Station. Credit: NASA

"Generally there's not a lot of lightning in the eye-wall region," he says. "So when people see lightning there, they perk up -- they say, okay, something's happening."

Indeed, the electric fields above Emily were among the strongest ever measured by the aircraft’s sensors over any storm. "We observed steady fields in excess of 8 kilovolts per meter," says Blakeslee. "That is huge--comparable to the strongest fields we would expect to find over a large land-based 'mesoscale' thunderstorm."

The flight over Emily was part of a 30-day science data-gathering campaign in July 2005 organized and sponsored by NASA headquarters to improve scientists' understanding of hurricanes. Blakeslee and others from NASA, NOAA and 10 U.S. universities traveled to Costa Rica for the campaign, which is called "Tropical Cloud Systems and Processes." From the international airport near San Jose, the capital of Costa Rica, they could fly the ER-2 to storms in both the Caribbean and the eastern Pacific Ocean. They combined ER-2 data with data from satellites and ground-based sensors to get a comprehensive view of each storm.

Rita and Katrina were not part of the campaign. Lightning in those storms was detected by means of long-distance sensors on the ground, not the ER-2, so less is known about their electric fields. 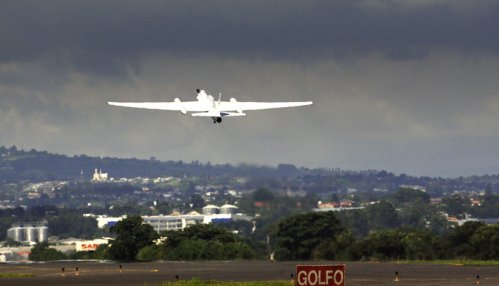 Image above: The ER-2 en route to a hurricane. Credit: NASA

Nevertheless, it is possible to note some similarities: (1) all three storms were powerful: Emily was a Category 4 storm, Rita and Katrina were Category 5; (2) all three were over water when their lightning was detected; and (3) in each case, the lightning was located around the eye-wall.

What does it all mean? The answer could teach scientists something new about the inner workings of hurricanes.

Actually, says Blakeslee, the reason most hurricanes don't have lightning is understood. "They're missing a key ingredient: vertical winds."

Within thunderclouds, vertical winds cause ice crystals and water droplets (called "hydrometeors") to bump together. This "rubbing" causes the hydrometeors to become charged. Think of rubbing your socked feet across wool carpet--zap! It's the same principle. For reasons not fully understood, positive electric charge accumulates on smaller particles while negative charge clings to the larger ones. Winds and gravity separate the charged hydrometeors, producing an enormous electric field within the storm. This is the source of lightning.

A hurricane's winds are mostly horizontal, not vertical. So the vertical churning that leads to lightning doesn't normally happen. 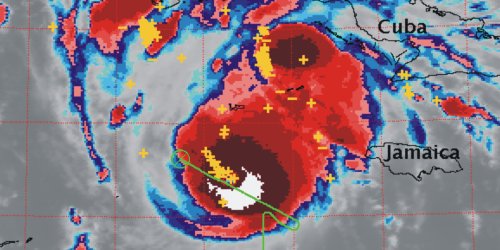 Image above: An infrared GOES 11 satellite image of Hurricane Emily. Yellow + and - symbols mark lightning bolts detected by the North American Lightning Detection Network. The green line traces the path of the ER-2. Click to view electric fields measured by the aircraft during the flight. Credit: NASA

Lightning has been seen in hurricanes before. During a field campaign in 1998 called CAMEX-3, scientists detected lightning in the eye of hurricane Georges as it plowed over the Caribbean island of Hispaniola. The lightning probably was due to air forced upward -- called "orographic forcing" -- when the hurricane hit the mountains.

"Hurricanes are most likely to produce lightning when they're making landfall," says Blakeslee. But there were no mountains beneath the "electric hurricanes" of 2005—only flat water.

It's tempting to think that, because Emily, Rita and Katrina were all exceptionally powerful, their sheer violence somehow explains their lightning. But Blakeslee says that this explanation is too simple. "Other storms have been equally intense and did not produce much lightning," he says. "There must be something else at work."

It's too soon to say for certain what that missing factor is. Scientists will need months to digest reams of data gathered in this year's campaign before they can hope to have an answer.

Says Blakeslee, "We still have a lot to learn about hurricanes."