It's Always Earth Science Week at NASA Goddard
Earth science happens 24/7 at NASA's Goddard Space Flight Center, located in the Maryland countryside near the nation's capitol. Goddard is actually composed of three facilities. These facilities include the main campus in Greenbelt, Md; a leading scientific institute in New York City; and a rocket launch site on the Virginia coast. At all three of these centers, scientists, engineers and technicians work to keep an eye on our home planet and try to better understand it. 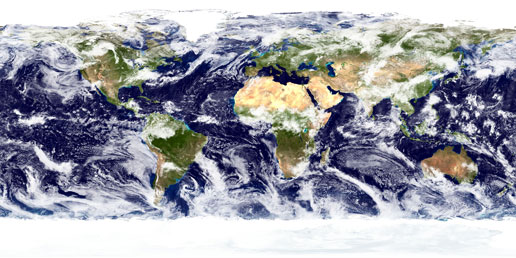 Image above: From the ozone hole over the South Pole to the health of forests around the world to air pollution from cities and wildfires, Goddard scientists and engineers see it all. Global views of our planet are received at Goddard every day and distributed to users around the world.

Monitoring the health of the Earth is a big job that requires a lot of different skills. Goddard engineers design and build new tools for seeing Earth from space and on the ground. Spacecraft mission operators fly a constellation of globe-circling spacecraft around the clock. Software engineers build systems to get a huge treasure trove of information out to the world. Earth scientists unravel the secrets of how our planet works. Taken together, it is work critical to protecting our home planet now and into the future.

No aspect of the Earth's surface, the water that flows on it, or the air that moves above it escapes Goddard investigators. From the annual ozone hole over the South Pole to the health of ecosystems around the world to air pollution from cities and wildfires, Goddard scientists and engineers see it all. 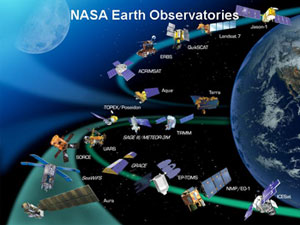 Image to left: Many of NASA's fleet of Earth-observing spacecraft are operated from Goddard, including the three multi-instrument "great observatories" – Terra, Aqua and Aura.

Several of NASA's Earth-observing spacecraft are operated from Goddard, where Earth Science Mission Operations staff monitor the health and safety of the satellites night and day as they orbit the globe. These satellites include the three multi-instrument "great observatories" ­ Terra, Aqua and Aura ­ as well as the Tropical Rainfall Measuring Mission (TRMM).

There are two extensions of Goddard located in other states. At the Wallops Flight Facility on Virginia's Atlantic coast, Goddard operates America's oldest continuous rocket range, which now includes an array of scientific balloons. The Goddard Institute for Space Studies in New York City is also a world-renowned center for research into global and regional climate change.

Engineers at Goddard use cutting-edge technologies to build new instruments and sensors that let scientists see the world in new ways. For example, a laser instrument developed at Goddard is currently flying over the great polar ice sheets on the ICESat satellite. The Geoscience Laser Altimeter System maps in great detail the surface of the ice to see how it changes year to year. Another Goddard-built instrument looks from the ground straight up to measure dust and soot in the atmosphere. It helps understand pollution patterns and climate change. The Micro Pulse Lidar is a sturdy, easy-to-use instrument that can run unattended – an ideal tool for making measurements in remote areas.

All of these satellites and instruments yield an immense amount of data and images every day. The Terra satellite alone adds 1 million megabytes of data daily. To manage all of this information and get it to the people that use it, Goddard developed and manages the largest scientific data system on the planet: the Earth Observing System Data and Information System. Scientists, local governments, teachers and the general public use the online system to get information from more than 30 satellites. 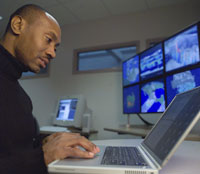 Image to right: Goddard research meteorologist J. Marshall Shepherd keeps an eye on how hurricanes rise and fall with the aid of images from the Tropical Rainfall Measurement Mission (TRMM) satellite.

Software engineers at Goddard have also built systems to turn this flood of data into useful products that are available quickly. The Land Information System, for example, takes satellite data and realistically predicts the flow of water and heat between the ground, plants and the atmosphere – information needed for weather and climate forecasting. In addition to being useful for scientific research, the system is used for local water-resource management, air quality monitoring and even military operations. Another system developed at Goddard keeps an eye out for forest fires for the U.S. Forest Service.

Goddard satellites and data originally designed for research are providing unique capabilities to other federal agencies in charge of weather monitoring and forecasting. The TRMM satellite is able to see inside a hurricane with radar to measure how heavy the rainfall is, an important clue about whether the storm is getting stronger or weaker. This information can now get into the hands of hurricane trackers within 3 hours of the satellite passing over the storm. Goddard also manages the construction of the Geostationary Operational Environmental Satellite (GOES) satellites for the National Oceanic and Atmospheric Administration that watch weather over the United States.

The big payoff of all this work at Goddard is the new knowledge gained about how our world works. Goddard has a vigorous Earth science research program with scientists investigating everything from El Nino and the ozone hole to plant life on land and in the oceans.

Goddard scientists routinely make new discoveries that they publish in scientific journals. Recent findings include the surprising result that while a warming climate may melt more sea ice in the Arctic, it could increase the amount of sea ice in the Antarctic. Last year Goddard scientists found that much of the ozone air pollution over the southern Atlantic Ocean traveled with the wind from the distant Indian Ocean. In another study computer modelers found how changes in sea surface temperatures created the devastating "Great Dust Bowl" that hit the United States in the 1930s.

Goddard climate modelers are working with their colleagues throughout the U.S. government to give the nation the ability to better predict short-term weather and even century-long climate changes. The new Earth System Modeling Framework now being tested brings together separate computer simulations of the atmosphere, oceans, land surface and sea ice with the power of a supercomputer to tackle the tough question of how the world's climate will change in the future.

For more information about how NASA is looking at Earth on the Internet, please visit:
http://www.nasa.gov/vision/earth/features/index.html