Most Changes in Earth's Shape Due to Changes in Climate
Researchers at The University of Texas at Austin using NASA satellite data found that significant changes in the Earth's shape in the past 28 years may be linked to climate events such as the El Nino weather pattern.

The Earth's shape changes because the climate events like El Nino shift where the mass of water is stored: in oceans, continents and the atmosphere.

Image to right: Satellites in the SLR: This graphic shows the constellation of satellites supported by the Satellite Laser Ranging (SLR) network. Data spanning 28 years from 8 satellites are used for measuring the large-scale mass movements on the Earth and global solid Earth dynamics. Click on image to enlarge. Credit: NASA

Dr. Minkang Cheng and Dr. Byron D. Tapley of the university's Center for Space Research used nearly 30 years of NASA satellite laser ranging (SLR) data to examine how much the Earth flattens at the poles and widens at the equator.

Cheng, a research scientist, and Tapley, the director of the center, looked at events like El Nino-Southern Oscillation and Pacific Decadal Oscillation that affect the amount of water moving in the oceans, atmosphere, and continents around the world.

The scientists found that two large increases in bulging at the Earth's equator were connected to the strong El Nino-Southern Oscillation events from 1986-1991 and 1996-2002.

Although El Nino is normally defined by warming of surface waters in the eastern Pacific Ocean, it also causes changes in weather patterns and the way the ocean circulates.

During an El Nino, heavy rains associated with the warmer waters move into the central Pacific Ocean and typically cause drought in Australia, and floods in Peru. That is, there's more water in Peru, less water in Australia.

Image to right: Variations in Earth's Oblateness: Variations in Earth's oblateness (flattened top, budging middle or "J2") are indicated on this graph over several areas. Over tropical areas (blue circles) and areas outside of the tropics (black circles) caused by soil moisture changes. Changes in oblateness (J2) from the global soil-moisture-induced changes from year to year in J2 (red line), compared with the unusual mean sea level pressure readings (gray line) warm phase (<0) and cold phase (>0). These signals are dominant in the observed interannual variations of the Earth’s oblateness during the strong El Nino/La Nina events. Click on image to enlarge. Credit: NASA

Similar to El Nino, but lasting 20 to 30 years instead of months, the Pacific Decadal Oscillation is a long-term temperature fluctuation in the Pacific Ocean. The oscillation also brings changes in the location of the cold and warm water masses that can alter the path of the jet stream, which moves storms around the world.

These changes redistribute water mass among the oceans, and water vapor in the atmosphere, and in soil on the continents, resulting in slight but detectable changes in the Earth's gravity field.

Cheng and Tapley found that the variations in mass, which caused the shift in the gravity field, were predominantly over the continents, with a smaller contribution due to changes over the ocean.

The Texas scientists also found that another change in mass may have started in late 2002, which coincides with the moderate El Nino that developed at that time. But the cause of an earlier variation in the Earth’s mass over the 21-year period between 1978 and 2001, however, still remains a mystery.

"The main idea, however, is that the Earth's large scale transport of mass is related to the long-term global climate changes," Cheng said.

Images above and below: What is an El Nino?: El Nino is a weak warm ocean current that runs southward along the coast of Peru around Christmas time. El Ninos disrupt fisheries and bring severe weather events worldwide. In a normal year, the trade winds blow westward and push warm surface water near Australia and New Guinea. During El Ninos, trade winds weaken and warm, nutrient-poor water occupies the entire tropical Pacific Ocean. Heavy rains that are tied to the warm water move into the central Pacific Ocean and cause drought in Indonesia and Australia, while causing floods on the east over Peru and Chile. Credit: NASA

Cheng and Tapley used the NASA SLR data, which measured the distance from ground stations to satellites by using satellite lasers that are accurate within a millimeter. The NASA Satellite Laser Ranging Mission studies the Earth's mass and gravity changes.

The long-term history of these measurements make it possible for scientists to see how the large-scale mass was moved around the world. The data also provide an immediate and historical record of melting glaciers and polar ice sheets, and the associated sea level change.

The laser range data have also been used to detect the motion of global tectonic plates on which land masses rest, the deformation of the Earth's crusts near plate boundaries, and the orientation and rate of spin of the Earth. 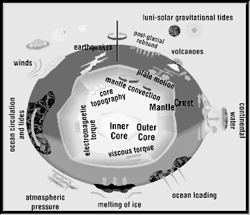 Image left: Factors that Affect Earth's Shape: This illustration depicts many of the factors that affect how the Earth's shape changes. They include such as: winds, earthquakes, post-glacial rebound, plate motion, melting of ice, atmospheric pressure and more. Click on image to enlarge. Credit: NASA

In March 2002, NASA and the German Aerospace Center launched the Gravity Recovery and Climate Experiment (GRACE) to sense small-scale variations in Earth's gravitational pull from local changes in Earth's mass. GRACE data will assist with future studies similar to Cheng and Tapley's research. The GRACE satellite, together with 18 other NASA research satellites, have opened new windows to exploring Earth and to understanding the intricate processes that support life.

The study was published in a recent issue of the Journal of Geophysical Research-Solid Earth.

For a more detailed version of this story, please see: Goddard's Earthshape webpage

For information about the PDO, please visit on the Internet: http://sealevel.jpl.nasa.gov/science/pdo.html

Tim Green
University of Texas at Austin
› Back To Top