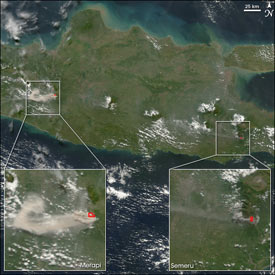 Image right: The Merapi and Semeru volcanoes released plumes of ash and steam on June 8, 2006. The plumes (gray) with Merapi (left) and Semeru (right) are mixed with clouds (white). “Hot spots" (red outlines), where surface temperatures are much hotter than the surroundings, are also shown in this image from the Moderate Resolution Imaging Spectroradiometer instrument on NASA’s Terra satellite. Credit: NASA

The intensity of two ongoing volcanic eruptions on Indonesia’s Java Island increased sharply three days following a powerful, 6.4-magnitude earthquake on the island in May 2006. The increased volcanic activity persisted for about nine days.

"During this period, we found clear evidence that the earthquake caused both volcanoes to release greater amounts of heat, and lava emission surged to two to three times higher than prior to the tremor," said study lead author Andrew Harris, University of Hawaii, Honolulu. The research was recently published in the American Geophysical Union's Geophysical Research Letters.

While scientists have long debated whether earthquakes can trigger new volcanic eruptions, this study linked an earthquake to enhanced volcanic activity at two ongoing eruptions that were being closely monitored by satellite-based sensors on a daily basis.

At the time of the earthquake, each volcano was being checked for changes in heat output by satellite sensors as part of a routine global "hot spot" monitoring effort that uses near real-time satellite data from NASA's Terra and Aqua satellites. 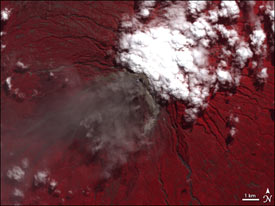 Maps of worldwide hot spot activity are created with data from the Moderate Resolution Imaging Spectroradiometer (MODIS) instrument on these satellites, pinpointing locations where surface temperatures are much hotter than their surroundings. The scientists combined these data with other details about the Indonesian volcanoes gathered by the satellites to analyze temperature and lava output rates at both volcanoes over a 35-day period spanning the earthquake.

The two volcanoes, Merapi and Semeru, are about 260 kilometers (162 miles) apart and roughly 50 kilometers (31 miles) north and 280 kilometers (174 miles) east of the earthquake epicenter, respectively. Given these distances, the researchers believe underground stresses from the earthquake's seismic waves likely acted to pump magma -- molten rock beneath the surface -- into the conduit to the surface, ultimately increasing eruption rates.

"The responses at Merapi and Semeru lagged about three days behind the triggering earthquake, which may reflect the time it took the change felt by magma residing at deeper levels to be transmitted to the surface," said Harris. 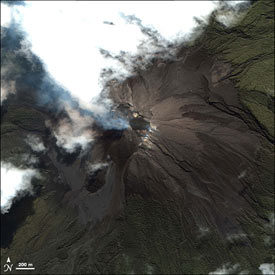 Image right: The Merapi volcano erupting on May 11, 2006 - two weeks prior to the Java earthquake - as captured by Space Imaging’s IKONOS satellite. A faint volcanic plume (gray) extends from the volcano’s summit toward clouds (white). Credit: GeoEye

The researchers concluded that regional earthquake events have sufficient power to modify the intensity of activity at ongoing eruptions, although they may not always be able to trigger new volcanic eruptions.

They also noted that the Java earthquake had a significant influence on the volcanoes for a relatively short period of several days, suggesting that catching the effect of a quake on an eruption requires careful observation. "Eruptions must be closely and continuously monitored in the days immediately before, during and after an earthquake if we are to link any earthquake with enhanced volcanic activity," added Harris.

Satellite monitoring may be able to play a predictive role in eruptions, rather than just its more traditional responsive role, according to the study. Instruments on today's advanced satellites are providing new and considerably more data to help scientists better track and understand volcanic eruptions.

"The satellite data we have now -- from MODIS, NASA's Advanced Spaceborne Thermal Emission and Reflection Radiometer and the Landsat-7 satellite -- give us fresh insights into the behavior of volcanic systems around the entire globe," said Harris. "This worldwide perspective would not have been possible using ground-based sensors; there are too many unmonitored sectors and periods. We simply could not have uncovered our results without the continuous and global data provided by MODIS."