Knowing the location of the center of mass, determined using measurements from sites on Earth's surface, is important because it provides the reference frame through which scientists determine the relative motions of positions on Earth's surface, in its atmosphere and in space. This information is vital to the study of global sea level change, earthquakes, volcanoes and Earth’s response to the retreat of ice sheets after the last ice age. 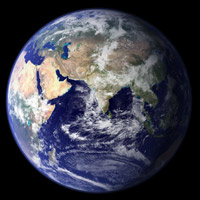 Image right: This spectacular "blue marble" image is the most detailed true-color image of the entire Earth to date. A new NASA-developed technique estimates Earth's center of mass to within 1 millimeter (.04 inches) a year by using a combination of four space-based techniques. The more accurate frame of reference has applications ranging from improving estimates of global sea level rise to improving our understanding of earthquakes and volcanoes. Image credit: NASA/GSFC
+ Larger view

The accuracy of estimates of the motion of Earth's center of mass is uncertain, but likely ranges from 2 to 5 millimeters (.08 to .20 inches) a year. Donald Argus of NASA's Jet Propulsion Laboratory, Pasadena, Calif., developed the new technique, which estimates Earth's center of mass to within 1 millimeter (.04 inches) a year by precisely positioning sites on Earth's surface using a combination of four space-based techniques. The four techniques were developed and/or operated by NASA in partnership with other national and international agencies. Results of the new study appear in the June issue of Geophysical Journal International.

"The past two international estimates of the motion of the Earth system's mass center, made in 2000 and 2005, differ by 1.8 millimeters (.07 inches) a year," he said. "This discrepancy suggests the motion of Earth's mass center is not as well known as we'd like."

Argus argues that movements in the mass of Earth's atmosphere and oceans are seasonal and do not accumulate enough to change Earth's mass center. He therefore believes the mass center of solid Earth provides a more accurate reference frame.

"By its very nature, Earth's reference frame is moderately uncertain no matter how it is defined," Argus said. "The problem is very much akin to measuring the center of mass of a glob of Jell-O, because Earth is constantly changing shape due to tectonic and climatic forces. This new reference frame takes us a step closer to pinpointing Earth's exact center."

Argus says this new reference frame could make important contributions to understanding global climate change. The inference that Earth is warming comes partly from observations of global sea level rise, believed to be due to ice sheets melting in Greenland, Antarctica and elsewhere. In recent years, global sea level has been rising faster, with the current rate at about 3 millimeters (.12 inches) a year. Uncertainties in the accuracy of the motion of Earth's center of mass result in significant uncertainties in measuring this rate of change.

"For scientists studying post-glacial rebound, this new reference frame helps them better understand how viscous [gooey or sticky] Earth's solid mantle is, which affects how fast Earth's crust rises in response to the retreat of the massive ice sheets that covered areas such as Canada 20,000 years ago," he said. "As a result, they'll be able to make more accurate estimates of these vertical motions and can improve model predictions."

Scientists can also use the new information to more accurately determine plate motions along fault zones, improving our understanding of earthquake and volcanic processes.

The new technique combines data from a high-precision network of global positioning system receivers; a network of laser stations that track high-orbiting geodetic satellites called Laser Geodynamics Satellites, or Lageos; a network of radio telescopes that measure the position of Earth with respect to quasars at the edge of the universe, known as very long baseline interferometry; and a French network of precise satellite tracking instruments called Doppler Orbit and Radiopositioning Integrated by Satellite, or DORIS.